You are at:Home»Photographers»6 Questions for Pete Boden 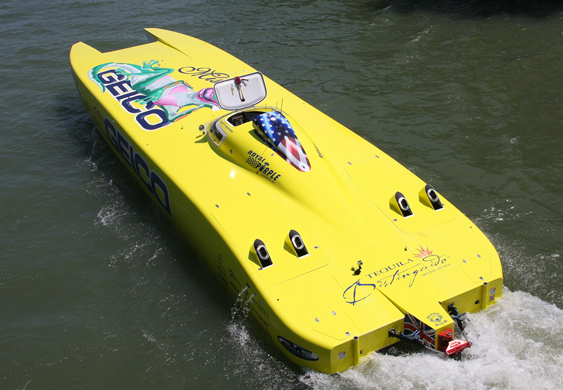 “I’ve been around boat racing in one form or another since I was a kid,” says photographer Pete Boden. “Growing up in Detroit, the Gold Cup was the show!”

The two worlds began colliding more than a decade ago. Boden had been travelling the world for 22 years, after joining the Navy at 19. In 1997 he was stationed in Jacksonville, Fl. “With a lot of races held in Florida I started going to them. [I] ended up crewing with a few teams. Raced a couple of Bat Boats.”

And taking a few photos too. “When some of the photos where posted online, I just felt I could bring another dimension to the sport,” Boden says. “I felt that there were more dimensions to boat photography than helo shots. And with my travels, I enjoy shooting wildlife, as well as what that country offers in landscape, and culture.”

Boden’s photos are on display all week. He also sat down and answered our 6 Questions.

Where’s your favorite place to go out cruising?
The Sarasota area.

What’s your favorite boating gadget?
The Bimini top! And the Coozie!

What’s the most impressive powerboat you’ve seen?
Anything built by Skater!  They set the industry standard that all others have to emulate!

What upcoming events are you most looking forward to?
Seeing as I’m working on a project in South America currently, my next boating event will be the annual New Year’s Day Fun Run held in Sarasota. I’m also hoping to attend the F-1 race in Sao Palo, Brazil in November.

What’s the most hilarious boat name you’ve ever seen?
I really don’t pay much attention to most names, [but instead]to the boat’s design, paint, etc. [These] seem to catch one’s eye more than a name.