You are at:Home»Sunsation»A Wise Decision 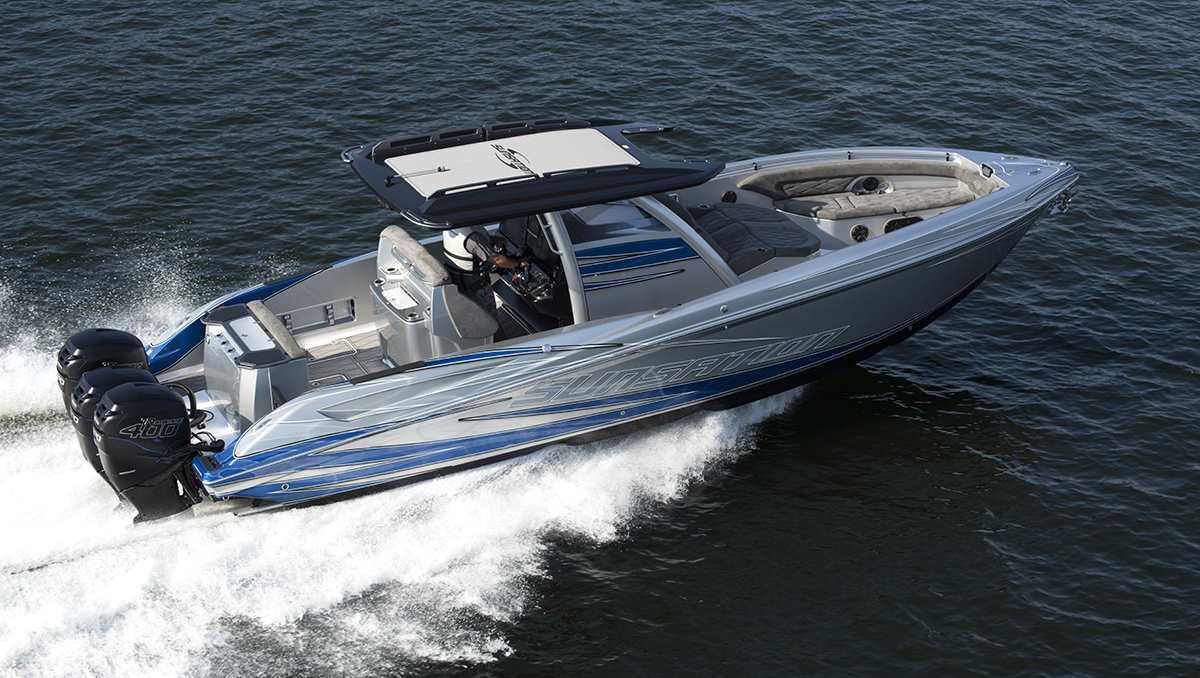 Highlighted in a speedonthewater.com story a few months back, the first Diamond Edition 34 CCX from Sunsation Boats is now in the hands of Tennessee performance boater and avid fisherman Alan Wise, who seems overjoyed with his first boat from the Algonac, Mich.-based company.

“This new Sunsation 34 CCX is phenomenal—I love it,” said Wise, who hauled the boat back to Tennessee after spending a day running it at Lake of the Ozarks in Missouri a couple of weeks after the factory demo model powered by triple Mercury Racing Verado 400R engines clocked a 88-mph run on the one-mile Lake of the Ozarks Shootout course. “I’ve used the boat quite a bit. I’ve run it on our local lake, Old Hickory, and I’ve also taken it to Brunswick, Ga., to do a little ocean fishing with some friends. I’m looking forward to taking it to Delaware to do some ocean fishing in the Northeast area.”

Before that though, Wise is going to be using the boat in next month’s Florida Powerboat Club Key West Poker Run with Sunsation’s Jared Morris and Joe Schaldenbrand. That was part of the deal, according to Morris, when Wise purchased the boat from Performance Boat Center’s Jason Taylor, who took great care of Wise when he stayed in one of the cabins on the Redhead Yacht Club property. Thanks to its exceptional Kustom Kolors paint job, a newly designed aerodynamic fiberglass hardtop and the premium Waves and Wheels interior and audio package (and the matching SeaDek flooring), the boat is a Sunsation showpiece, which is why it will be on display and available for pre-qualified demo rides in Key West.

Wise said he decided to start looking around at center consoles a while back and that after doing a good amount of research he felt like the Sunsation 34 CCX was a tremendous value when it came to build quality, performance and overall appearance. Of course the 1,200 hp in Mercury outboards and the fully loaded new Diamond Edition model only added to the appeal of the 34-footer he found for sale at the end of the summer.

He said the usable space inside the spacious cabin and on both ends of the deck was a huge selling point as well. Just last Sunday he said he had 15 people on board and it wasn’t a bit uncomfortable.

“The overall package is amazing; Sunsation really builds a great boat,” he said. “The interior is very nice—and unique. And the paint job is incredible. I was lucky to find a boat as nice as this one. It’s almost too nice for fishing. I keep telling my friends we have to be a little more careful, especially when it comes to beating the lead on this paint job.”

Sunsation’s Jared Morris ran the 34-footer up to 88 mph at the 2016 Lake of the Ozarks Shootout in Central Missouri. (Photo by Pete Boden/Shoot 2 Thrill Pix.)

Wise admits to owning way more fishing boats than go-fast boats in his life. His last go-fast boat was a twin-engine 32-foot Sonic Powerboats V-bottom. Now, with the 34 CCX, he feels like he has the best of both worlds. And so far he doesn’t mind the attention he’s receiving on the water and while towing the boat from place to place.

“I’ve always been a freshwater fisherman, but I’ve been attracted to saltwater fishing for some time, which is why I stared looking at center consoles in the first place,” Wise said. “This boat is something else though. It gets a lot of attention—people come up and take pictures and ask all kinds of questions. The engines always blow them away. It’s pretty cool. It definitely makes you proud of what you purchased.”

Editor’s note: You can check out a virtual tour of the Diamond Edition 34 CCX on the company’s website.