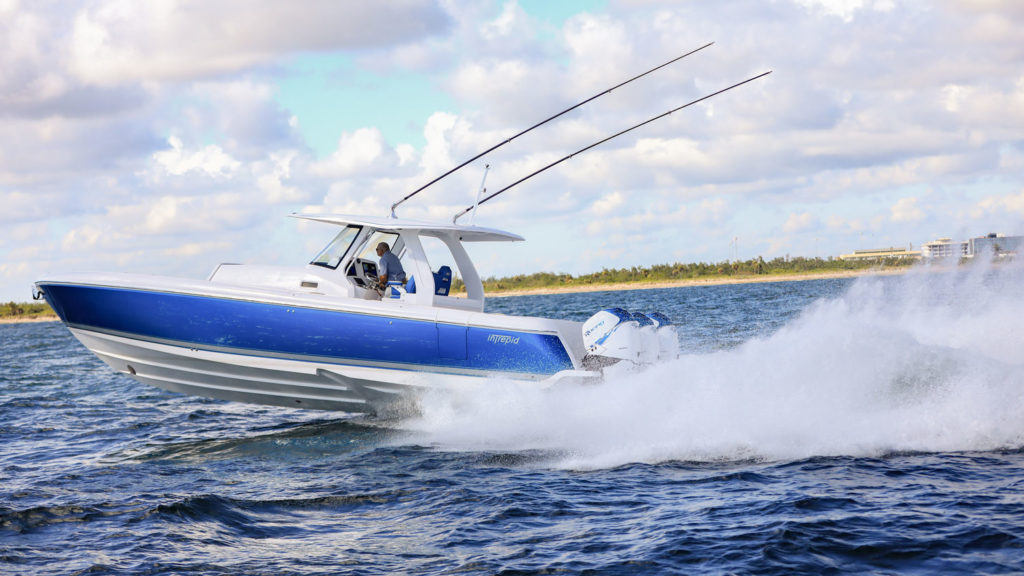 If you look up “panacea” on dictionary.com, you’ll see it defined as “a remedy for all diseases and ills; cure-all” and “an answer or solution for all problems and difficulties.” As it happens, that word also defines how most boat owners feel about their time on the water. So the name Intrepid Powerboats chose for its latest center console — the 407 Panacea — makes a lot of sense.

The Miami-based company introduced the 40-footer with triple Mercury Racing Verado 400R outboard engines at the 2017 Fort Lauderdale Boat Show and it captured lots of attention, and not just from “traditional” center console buyers. The 16,000-pound beauty caught the eyes of more than a few performance-minded buyers, according to Mark Beaver, who handles factory sales with the company.

To say that Intrepid is targeting performance-boat enthusiasts with the 407 Panacea would be incorrect. But Beaver and the rest of the team at Intrepid believe the center console does have plenty of crossover appeal.

“We are not in competition with that side of the market,” said Beaver, who before joining Intrepid more than 20 years ago worked for Donzi, Velocity and other pure go-fast powerboat builders. “We’re not competing with Deep Impact, Nor-Tech, MTI, Mystic and so on. They have the performance center console segment covered. But we did get some of those customers in our booth at Fort Lauderdale.

“Of course, their first question was, ‘Can you do it with quads?’” he added, then laughed. “And, yes, we can set it up with quads. The 407 Panacea we had in Lauderdale was our first one and it was a little flashy for us. But it can also be set up for fishing or as yacht tender.”

With quad Verado 400R outboards, the 407 Panacea will run in the low 70-mph range, according to Beaver. While that’s not fast by performance-oriented center console standards, it’s also not the point of the boat.

“We designed a single-step hull that’s not very aggressive, but just flat-out runs,” said Beaver. “The hull does exactly what it’s supposed to. It’s not sensitive. People without a lot of boating experience can feel confident with it.”

“We don’t offer wild paint jobs or upholstery,” he continued. “We like to keep the classic look and the classic lines of Intrepid. But the 407 Panacea does have all the amenities like a lot of really comfortable seating and a nice cabin.”

Buyers who choose the Panacea 407, which Beaver said he plans to enter in poker runs this year, will need to be patient as Intrepid builds its boats to order and there is a backlog. Though the company is a factory-direct builder, it does have its own “stores” with what Beaver called “Intrepid partners.” The company also plans to establish a presence on the West Coast in the near future,” he said.

“I think the new 407 Panacea is a good example of the lean toward a more performance-minded crowd for us,” he said. “So after the Fort Lauderdale show, I decided to take us more in that direction.”