But just 24 hours before he and Factory Billet engine builder Mike Faucher had a chance to take one run down the three-quarter-mile course, Schultz had to head back to Illinois for the birth of his daughter.

Pesky detail, but one that demanded personal attention. 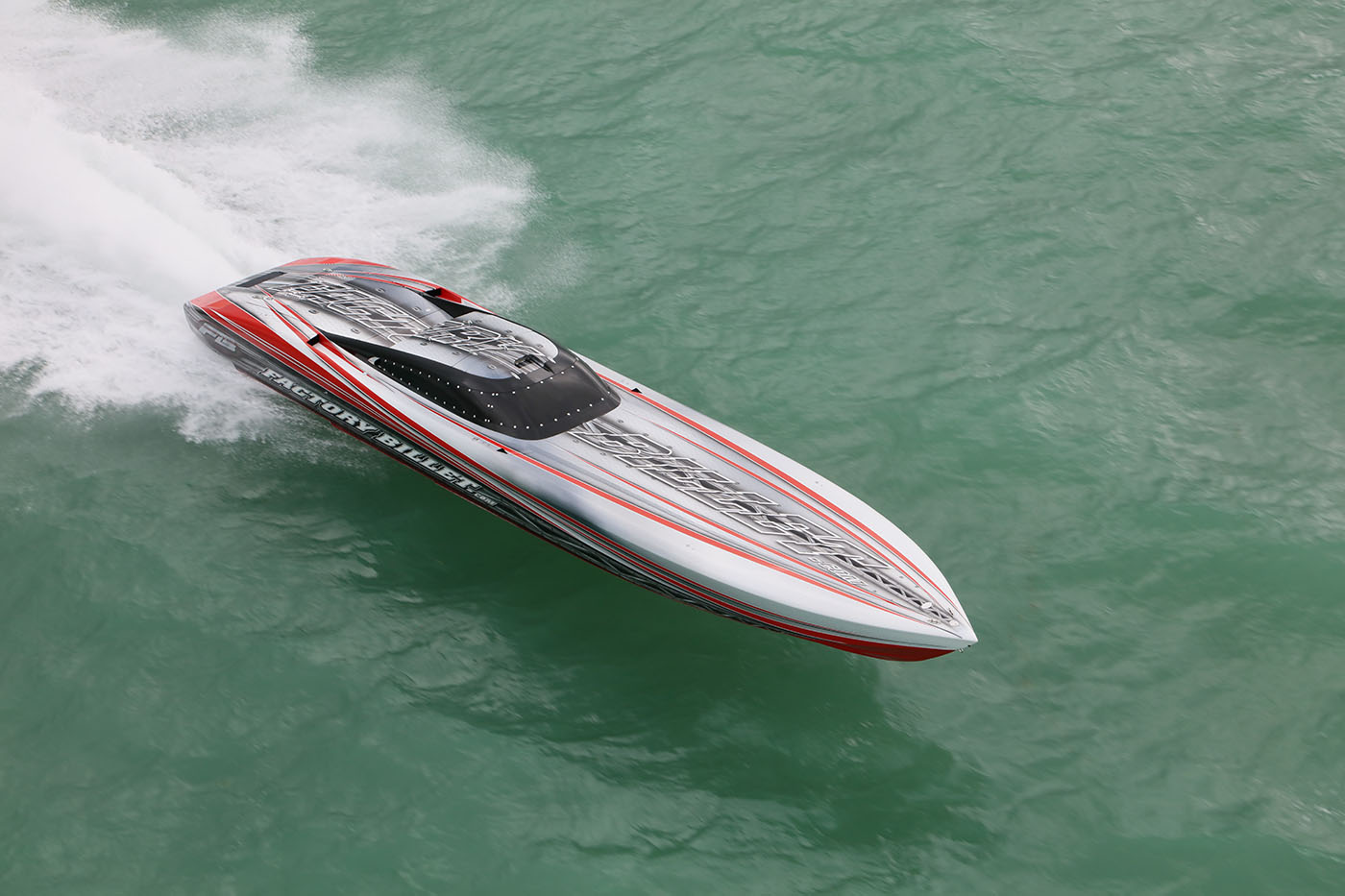 After a one-year hiatus, Factory Billet is returning to the Lake of the Ozarks Shootout. Photos by Pete Boden/Shoot 2 Thrill Pix.

Schultz is dead-certain that no such schedule conflicts will arise this year and he and Faucher will return to the Central Missouri top-speed event to vie again with Dennis and Jason in their open-cockpit 43-foot Black Thunder, who also have vowed to return. In 2017, the two teams tied with a 161-mph top speed. The following year, Schultz and Faucher managed a 162-mph run against the Parvey’s 153-mph.

That both teams are coming back is great news for Lake of the Ozarks Shootout fans, as the competition between the two big, turbocharged V-bottoms remains the most compelling of the event.

“We’ve been playing around with center of gravity modifications and taking some weight out of the boat,” said Schultz. “When we were at Lake of the Ozarks last year, the boat was substantially faster than it had been the year before. We had it running in the high 160s, but unfortunately we had to leave early.

“There’s no way that will happen this year,” he added, then laughed. “Even if my partner were pregnant right now, she wouldn’t be due until December.”

“The more you run the boat, the more you find subtle changes that make the difference,” said Faucher. “We’re really just refining it. Our biggest challenge is getting seat time together.”

Already committed to participating in the 2020 Shootout and concurrent Super Cat Fest event, Schultz said that he and Faucher would like to leave this year’s event with a top speed of 170 mph under their belts. But beyond laying down a specific number, he’s excited to return to the event knowing he won’t have to bail out and rush to a hospital delivery room. 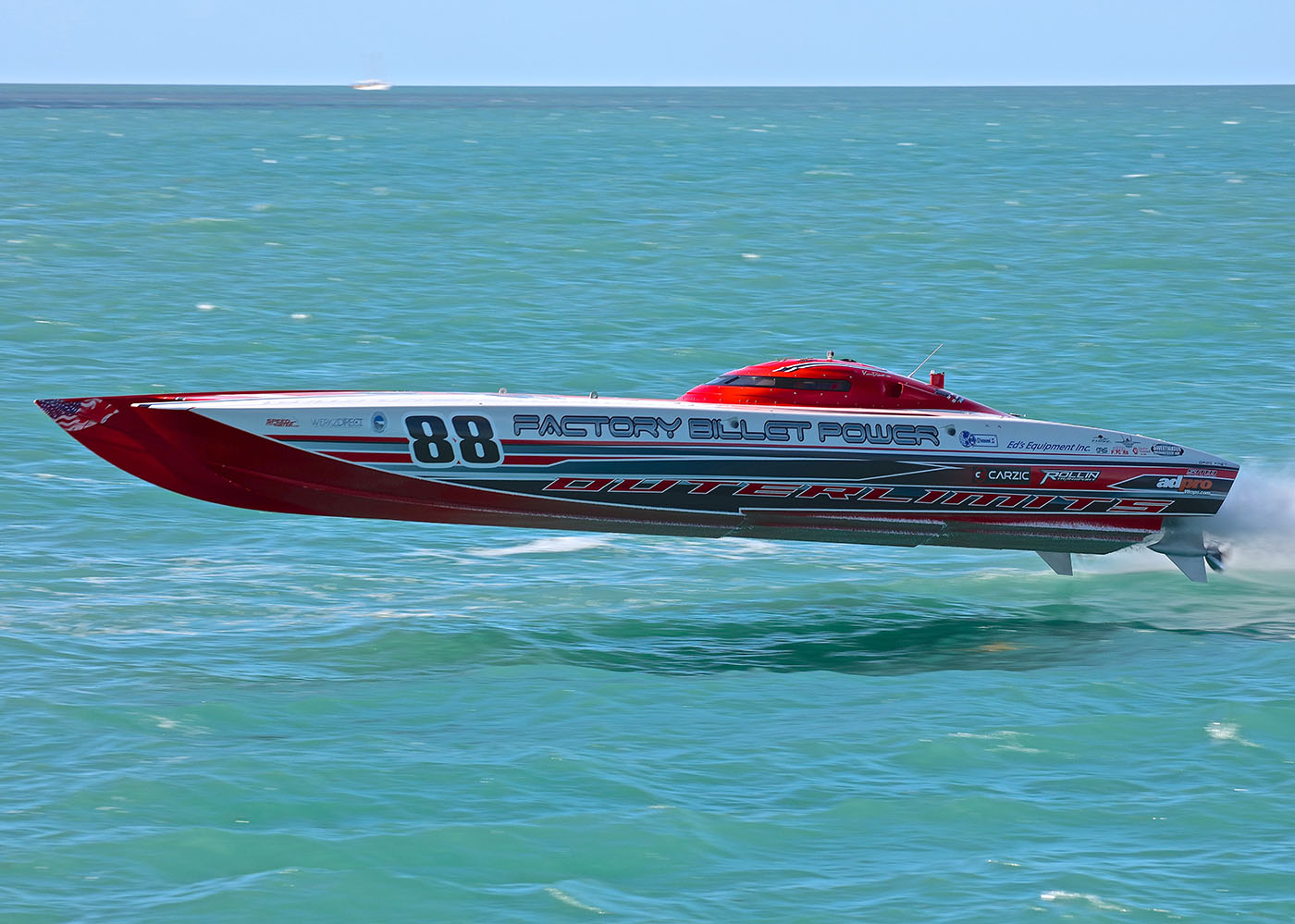 Noteworthy as it is, the Lake of the Ozarks Shootout is a one-off event. Long before the Factory Billet V-bottom arrives for the late-August happening, a 39-foot Outerlimits catamaran dubbed SV Racing, powered by 750-hp-plus naturally aspirated Factory Billet engines and campaigned by throttleman Vinnie Diorio and driver Simon Prevost will begin competing in the American Power Boat Association Offshore Championship Series, followed by Race World Offshore events in Clearwater and Key West, Fla. Faucher currently is finishing up the Supercat-class raceboat’s second engine, as well as building a back-up set for the team.

“Building engines for Vinnie and Simon wasn’t so much challenging as it was intriguing, because you have to work within the parameters of the Supercat-class engine specifications,” he said.

Between Factory Billet’s performance at the 2020 Lake of the Ozarks Shootout and SV Racing’s performance on the offshore racecourse, chances are excellent that the name will be in the news more than once this year. And that’s a good thing for Factory Billet engine program, which though close several times is still working to secure its first-pleasure boat client. Factory Billet’s high-profile charge into 2020 could change that.

On and off the racecourse, it’s going to be a blast to watch.