You are at:Home»Events»More Michigan Please

If you happened to follow any of the stories I did for speedonthewater.com or any of my social media posts from last weekend’s Rock The Coast fun run in Grand Haven, Mich., you know I had a good time participating in my first West Michigan Offshore event. I’ve covered the nonprofit organization’s events and philanthropic efforts many times with assistance from photographer Pete Boden and the WMO board members—heck I even wrote a Welcome West Michigan Offshore column on April Fool’s Day in 2015—but it was much cooler being there to meet everyone and witness it all firsthand. 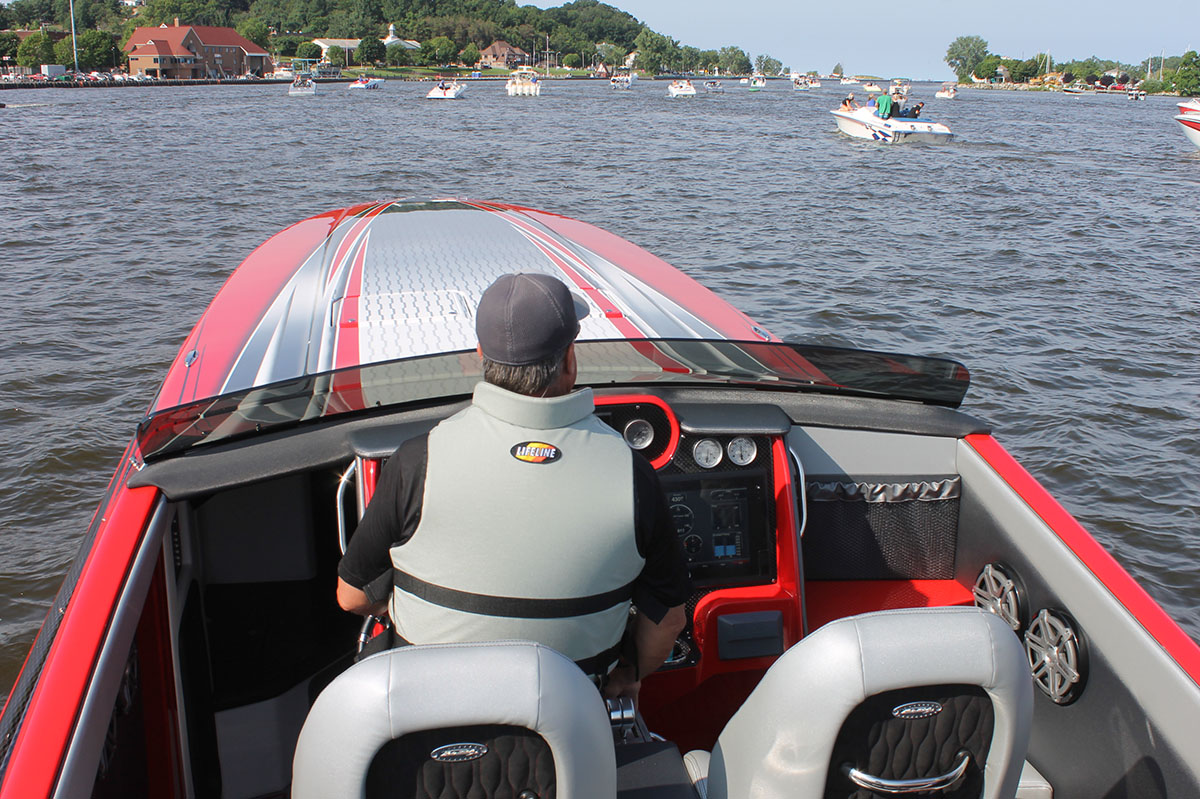 The group did an excellent job organizing the runs on Friday and Saturday, the town of Grand Haven and the surrounding communities were super welcoming and enjoyable to visit, and the participants were especially friendly and helpful.

And, as a special treat, Mother Nature provided a nice enough window of weather late in the day Friday and early Saturday, while whipping up a sizable batch of Lake Michigan’s finest three- to four-footers (with an occasional eight-footer if you ask some people) for Saturday’s run to Holland and back. Unfortunately an angry—at least it seemed that way to this Californian—late-afternoon thunderstorm cut the raft-up short on Pigeon Lake in Port Sheldon.

As far as the boating venue and the club’s hospitality, I’d definitely recommend giving Rock The Coast a try next year. I was lucky enough to catch a ride on Saturday with Ron Meyering, a Holland resident who has been a member of WMO since it was founded four-plus years ago.

Meyering recently took delivery of an extraordinary Nor-Tech 477 Super Vee powered by Mercury Racing 1550/1350 engines and dressed in stunning Visual Imagination graphics, and, as expected, riding in his boat with his son, Kevin, was an awesome experience. We didn’t come close to approaching the boat’s 120-plus-mph top speed in 1350 mode, but I could tell that the boat, which handled the rough stuff with ease, was super responsive with the turbocharged engines. 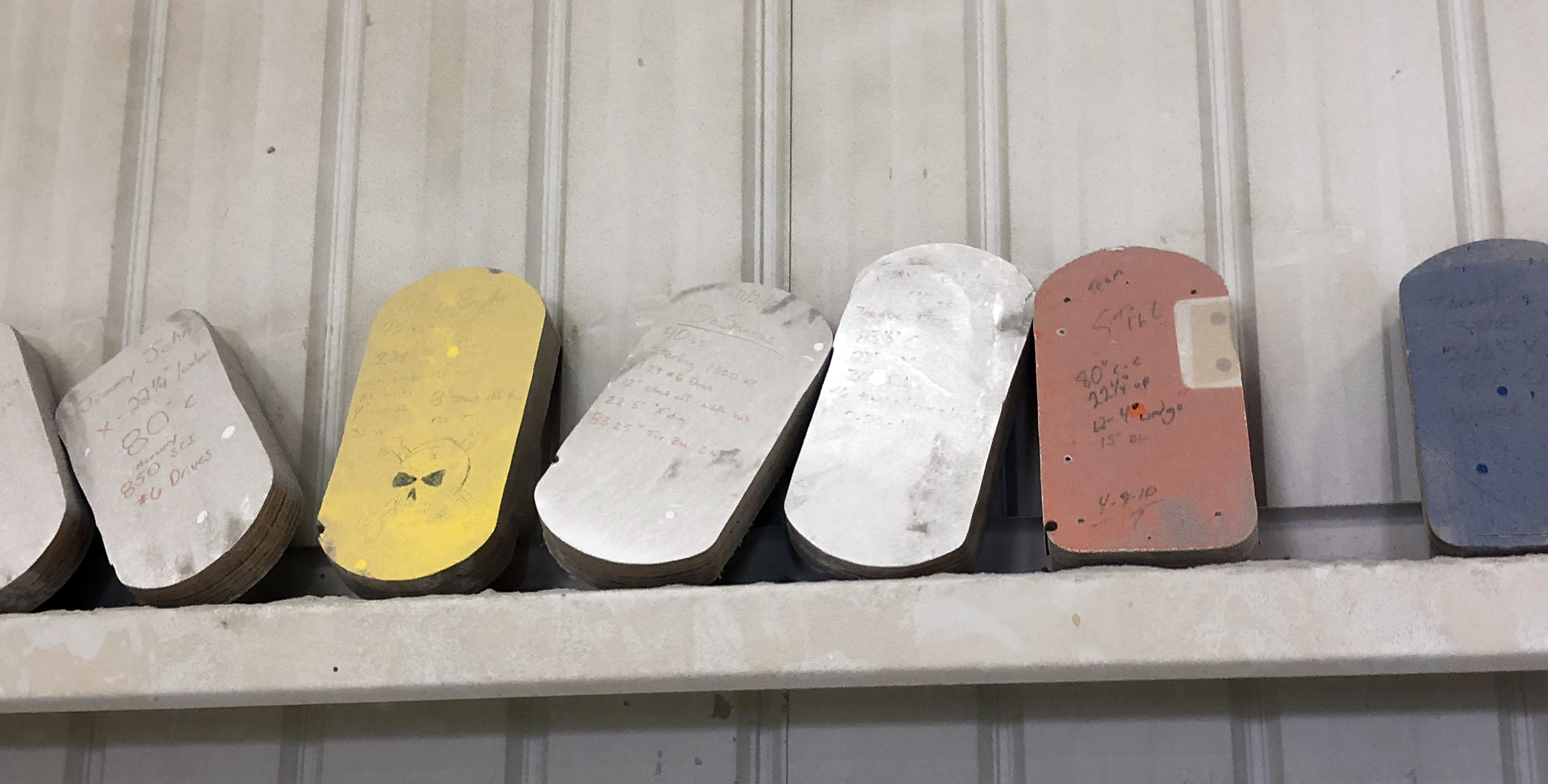 The large collection of transom cutouts lined up along a shelf on the wall at the Skater factory was neat to see. Photo by Jason Johnson

Along with staying with my friend, Paul Rose of SeriousOffshore.com and his wife, Terri, who were excellent hosts, another major highlight of my trip was visiting Douglas Marine, the home of Skater Powerboats, in Douglas. Before an early afternoon model photo shoot at The Wharf Marina in Grand Haven, Boden and I did a quick tour of the facility. While more than half of what we saw can’t be written about—at least not yet, which is the norm when you visit Skater or most other performance boat manufacturers, for that matter—I did snap a few images while walking around of a jaw-dropping 50-foot turbine-powered cat and a 46-footer with twin 1550/1350 engines and a full cabin that is going to be at Super Cat Fest in Central Missouri during the Lake of the Ozarks Shootout in August.

Despite seeing those boats as well as a handful of raceboats in various stages of production, I think the visual I won’t soon forget was the collection of transom cutouts lined up along a shelf on the wall with boat name, boat size, owner name and setup details, including X-dimension, drives and other relevant information, scribbled on them with Sharpie.

Looking at a piece from the STIHL raceboat built in 2010 next to cutouts from well-known boats owned by Gary Colledge, Jimmy Johns, Gary Smith, Ron Szolack and more, was damn cool. “That is our filing cabinet,” joked Tony Cutsuries of Skater. “Not real compact, is it?”

Good times in Michigan for sure. And, as I mentioned my column last month, Let The Fun Begin In Michigan, the fun isn’t over yet in Michigan. 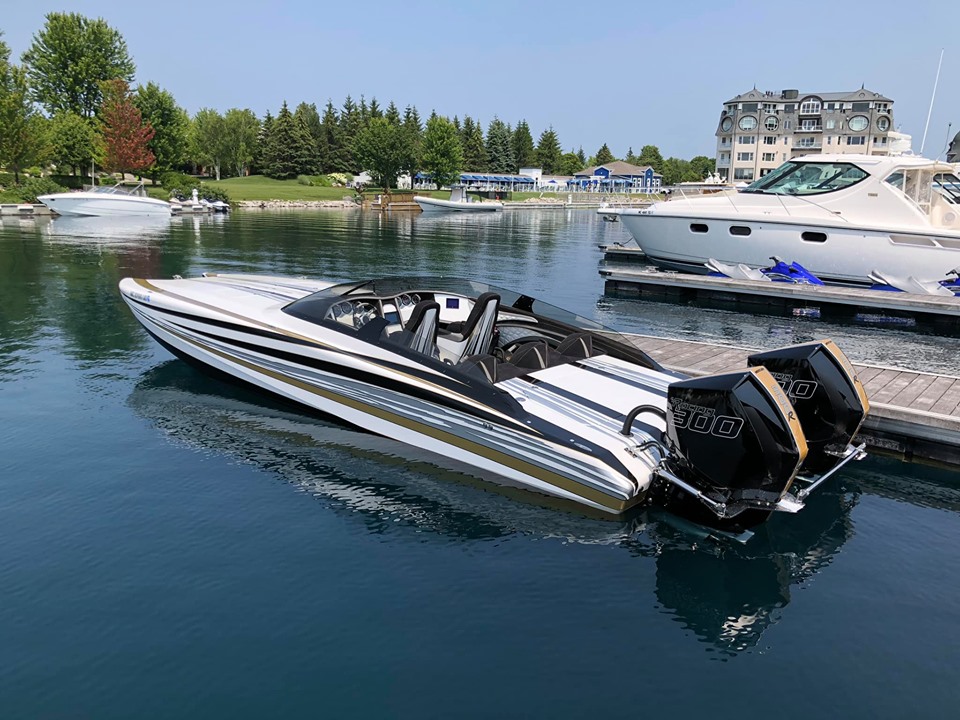 There’s also the one-and-only Skaterfest (Aug. 8-10) followed two weeks later by the WMO Summer Blast (Aug. 23-25) starting in South Haven. Hopefully my friends in Michigan (both new and old) get to do plenty more boating in August and September—before they send their boats to Florida for Michigan’s offseason.