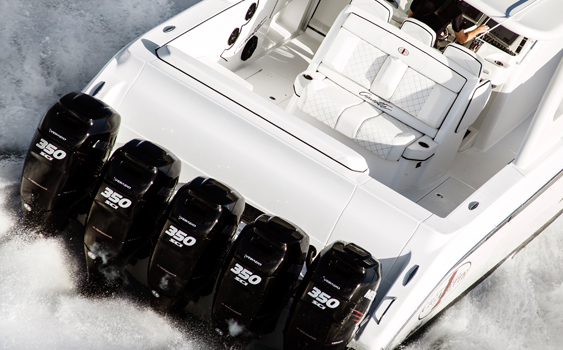 Even in the outboard category, big power is more popular than ever in the new go-fast powerboat world. (Photo courtesy Cigarette Racing Team.)

A few weeks back I chatted with Scott Sjogren at Pier 57 Marine, the well-known dealership of new Cigarette and Marine Technology, Inc., high-performance boats, as well as pre-owned models from just about any manufacturer you care to name, in Gurnee, Ill. After Sjogren and I got past our first ten minutes of standard good-natured abuse, we started on the subject of power trends—make that trends in power—in the go-fast powerboat world.

Sjogren put it simply. “If it’s big, it’s selling,” he said. “It doesn’t matter that a Mercury Verado 300 has a much longer warranty—as long as seven years if you want to pay for it—than a Mercury Racing Verado 350SCi. At least in new Cigarette center consoles, they’re going with the 350SCi almost exclusively.”

A few days ago, I chatted with Mike Fiore, the owner of Outerlimits Offshore Powerboats in Bristol, R.I. Because Fiore and his wife, Shonda Whipple-Fiore—the daughter of Art and sister of Dustin Whipple of supercharger leader Whipple Industries in Fresno, Calif.—just had a baby boy last week, we skipped the good-natured abuse and moved right into family matters. But eventually, I steered the conversation back to go-fast power trends. I mentioned what Sjogren had told me.

That threw me. I’d been told by Mercury Racing representatives—and also read in the company’s press material for the 1650 Race engine—that the engine would only be sold to “qualified race teams.” I’d even reported that in my first story on the engine, Mercury Unveils 1650 Race Engine—Miss GEICO to Run First Set. 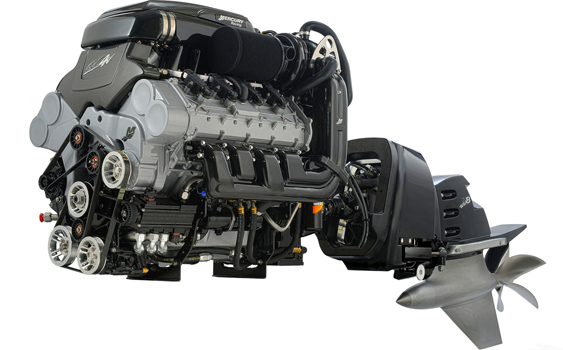 Designed for offshore racing, the new Mercury 1650 Race engine also will find a home in pleasure boats, among the first of which is a 52-foot V-bottom from Outerlimits.

So a few hours ago, I called Rick Mackie, the director of marketing and media relations for Mercury Racing in Fond Du Lac, Wis. I didn’t have to skip the good-natured abuse with Mackie because he’s just too damn nice to abuse, even in the most good-natured way. I asked him about the sale of 1650s to a company building a pleasure boat. Though he hadn’t heard of the sale of 1650s to Outerlimits, he was not surprised.

“It is a race engine that runs on 112-octane fuel and has no warranty,” he explained. “But once we sell an engine to an OEM (original equipment manufacturer), we can’t control where it goes, but I want to emphasize that the engine has no warranty and is designed for racing on 112-octane fuel. The onus for whatever happens to it is completely on the owner.”

Why was it originally stated the engine will only be sold to “qualified race teams?” Because as consumer-direct sales go, that was and is the truth. The first production pair of 1650 Race engines was delivered to the Miss GEICO racing team last week. Of course, as Mackie pointed out, that won’t stop OEMs from buying 1650s for the pleasure-boat customers who are either purchasing new boats or repowering existing models.

Regardless of who buys what from Mercury Racing, if it’s big power they’ll have to wait. Orders for 1100 and 1350s are reportedly backlogged and even with much more limited production and demand the 1650 Race engine likely will follow suit. At this level, even the most well-to-do buyers have to get in line because they’re all well-to-do.

We should all have such powerful problems.