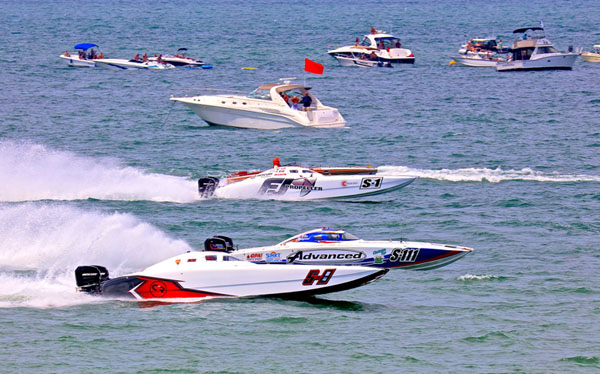 With just 10 hours on their 32-foot Doug Wright catamaran powered by Mercury Racing 300XS outboard engines when they arrived last weekend in Mentor, Ohio for the Super Boat International Cleveland Construction Grand Prix, throttleman Casey Boaz and driver Rob Unnerstall of the new C&R Racing team would have been happy to just finish their first offshore race. The last thing they expected was to return to their Missouri homes with a first-place Stock-class trophy, especially against the likes of class dominator Gary Ballough and his cockpit partner Darren Kittredge in FJ Propeller, another 32-foot Doug Wright cat with the same 600-hp power package.

But on the third or fourth lap around the four-mile course on Sunday—after a successful practice session on Saturday—they found themselves leading the three-boat Stock-class fleet. And despite losing their rearview camera and struggling with their in-cockpit radio communication system, they were able to maintain their lead to the checkered flag. Except they never saw one.

“When we got through what we thought was the twelfth lap we pulled off the last piece of tape from the dash, but we didn’t see a checkered flag,” said Unnerstall. “This being our first race, we ran another lap just to be sure—we didn’t want to make a rookie move and not complete all the laps. Gary followed us, so maybe he thought he had miscounted, too.”

As it happened, the extra lap was unnecessary. With its 32-footer rigged at Performance Boat Center (read the story) in Osage Beach, Mo., the C&R Racing team had won. No one was more surprised than Unnerstall and Boaz, who co-own the canopied catamaran and are neighbors on the shores of the Lake of the Ozarks in Central Missouri. (Boaz lives there full time, Unnerstall heads to the lake from his home in Wentzville on weekends.)

“We honestly had no expectation of winning,” said Boaz. “With offshore racing, it’s one of those deals where you hope everything holds together for a race.”

Unnerstall agreed with his teammate. “We really didn’t expect to win,” he said. “We tested in smooth water on Saturday. On Sunday, we talked to (Wake Effects team owner/driver) Rusty Rahm after his race, who told us it had gotten rougher out there, like two- to four-footers. So we stepped down a bit in propeller (pitch) and moved weight forward.

“We made up our mind before we started not to push really hard before we saw how the race went,” he continued. “So we kind of hung out after the start. Casey was doing a great job on the throttles and I guess on about the third or fourth lap we passed Gary. We lost our rearview camera, but at the last second we had added these little spotter mirrors so we could see people who close behind us, but not far away. But we couldn’t find Gary. Around lap No. 9, we could see Gary going into the corners as we were coming out, so we knew had about an eighth of a lap on him.”

For Unnerstall and Boaz, that turned out to be enough for the win. Though Ballough doesn’t have to face losing all that often, he lived up to his reputation of being gracious in defeat.

“Gary was as excited for us as we were,” said Boaz, who came to his first offshore race with some powerboat racing experience in the form of SST 120 hydroplane competition under his belt. “He helped us so much through the build of the boat. Every time I had a question, Gary was the person I called. (Stock-class veteran) Ryan Beckley also was extremely welcoming—everyone was very welcoming. Offshore racers are a pretty tight-knit group.”

After the SBI awards ceremony in Mentor, the C&R Racing teammates drove through the night to get home. “We didn’t sleep much,” said Unnerstall. “We were running on adrenaline. We were so excited.”

Next up for the team is the Super Boat Great Lakes Grand Prix on Lake Michigan Aug. 3-6 in Michigan, Ind. Though neither Boaz nor Unnerstall expects to win, it’s safe to say the rookie-season duo has developed a taste for it.

“We’re have a few things to fix on the boat, but we’re ready to go again,” said Boaz. “If we could go tomorrow, I think we would.”