You are at:Home»Community»Old School Made New 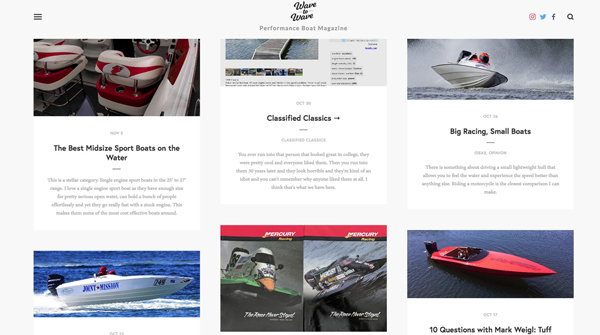 I confess: I cringed when I read the subject line, “Outboards: The Fall of Mercury Racing and the High Performance Opportunity” in an offshoreonly.com message board thread. Here we go, I thought, another expert opining on how the most successful high-performance marine engine company in history is somehow missing the mark. This ought to be good.

Turns out that the article linked to in the thread—save for its unfortunate headline—was good. Really good.

Properly labeled “Opinion,” the piece mourned the demise of the high-performance two-stroke outboard market while presenting lower-output, high-performance four-stroke outboards as replacements worth pursuing. Author Jared Powell, a 39-year-old New York City-based advertising copywriter who grew up around single-engine go-fast boats in Canada—his family even produced them—made a strong case. That his notions likely do not fit into Mercury Racing’s future product plans doesn’t matter relative to the point he was making.

Powell is a performance-boat enthusiast who grew up glued to the pages of Powerboat and Hot Boat magazines. He’s also a damn good writer—far better than most in the current go-fast powerboating media realm—and that makes his new Wave to Wave Performance Boat Magazine a pleasure to read. He launched the feature-filled, online magazine, in essence a website with the look, feel and feature-based approach of a traditional print magazine, in late July. In the relatively near future, he’ll be adding a branded video element to the publication. That’s one of the big advantages of digital publishing—you can incorporate and integrate online video into your existing media platform.

“Wave To Wave is almost like an old-school print magazine for the digital era,” said Powell.

Single-engine—outboard or stern-drive—V-bottom sportboats and catamarans up to 30 feet long are the magazine’s focus. Powell has organized the publication into categories or “content buckets” that include: Technical, Restorations, Opinion, News and Interviews, as well as a comical, irreverent take on used-boat listings called “Classified Classics” in which Powell offers mostly good-natured commentary on a given pre-owned boat for sale.

“I expected to get some push back from the people selling the boats, but I haven’t,” he said. “But I’ve gotten a ton of feedback from the readers, and they love it.

According to Powell, the magazine’s restoration and interview articles have proven particularly popular.

“We use experts in the field to help cut though what I call the ‘noise’ on the Internet,” he said. “We’re love picking the brains of designers like Mark Weigl of Tuff Marine—they’re building such great boats.”

To date, Wave to Wave has produced 40-plus feature stories, which is solid output for a little more than three months worth of publishing. From “Bayliner Cobra: Avant-Garde or Junk Yard,” the first story that went live on the online magazine, to “The Best Mid-Size Sportboats On The Water” published earlier this week, they demonstrate excellent editorial range and talent within a mostly ignored, but still popular powerboat market segment.

Plus, Wave to Wave’s features are just plain old good fun to read. Powell writes cleanly. He has a strong editorial voice, a distinct style and tone and a wicked sense of humor.

“I’m having fun creating the content for Wave to Wave,” he said. “And people seem to really be liking it, ”

Count me among them.