You are at:Home»Commentary»Event Schedule Conflict Resolution

From Memorial day through Labor Day, there are 12 weekends in any given boating season, at least in locales that have proper seasons meaning cold snowy winters and hot humid summers. That means, given the hundreds of organized go-fast boating events across the country each summer, there is bound to be some overlap. So having two to three events during the same weekend, especially in July and August, is common.

Take the weekend of August 9-11, for example. Joining Skater Fest, an annual weekend-long homage to the vaunted catamaran brand in Michigan hosted by Skater aficionado Ron Szolack, and the Ray Nuchereno Memorial Poker Run in Buffalo, N.Y., on the calendar is the Outerlimits Factory Fun Run. The Bristol, R.I. custom V-bottom builder announced the event yesterday. 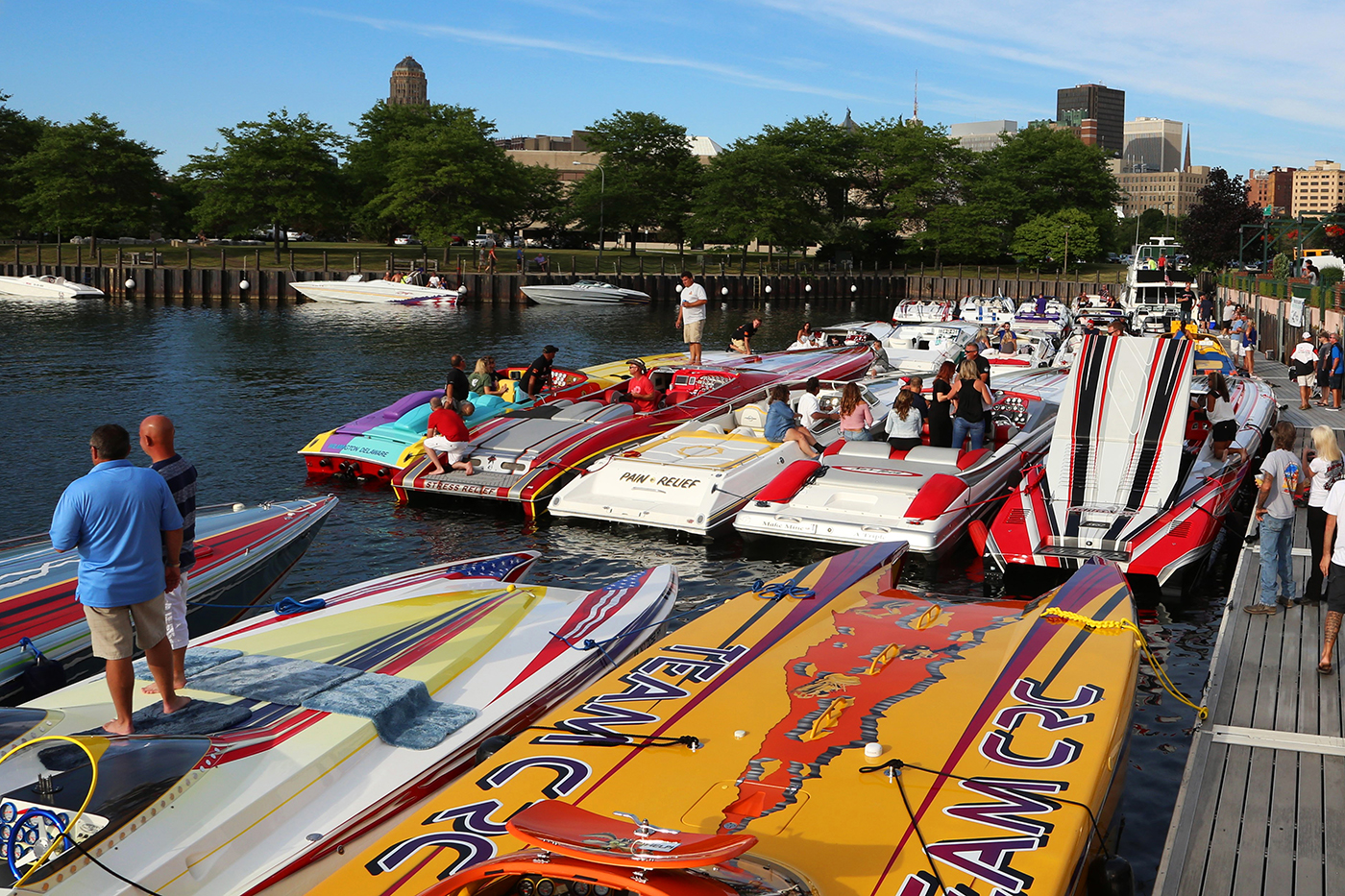 Despite the likely loss of several Outerlimits models, Scioli said he still expects to have 60 boats at the 2019 Ray Nuchereno Memorial Poker Run in August. Photos by Jeff Helmkamp/Helmkamp Photos.

Could the company have chosen another weekend for its first celebration of the Outerlimits brand and family of customers under its new sole owner, Brian McLaughlin? In theory, yes, but in practice it’s not that easy.

When Dan Kleitz, Jason Amaral and the rest of the Outerlimits crew chose dates, their primary concern was accommodating as many customers—all of which have event plans of their own this season—as they could.

“In July, you have the Boyne Thunder and 1,000 Islands Charity poker runs,” said Kleitz. “In June, you have the Four Horsemen Poker Run and the Erie Poker Run. But believe it or not, one of the biggest challenges was the offshore racing schedule with (longtime Outerlimits customer) Vinnie Diorio, Brian Forehand and (ongoing Outerlimits catamaran program consultant) Steve Curtis racing this year. At least the weekend we chose is not a race weekend.”

For those planning to attend Skater Fest, the Outerlimits event on the same weekend is mostly—if not totally—irrelevant as few if any Skater owners also currently own models from Outerlimits, and vice-versa. But for Elite Poker Runs LLC’s Anthony Scioli, the organizer of the Buffalo-based event, the conflict will end up costing his event multiple entries. 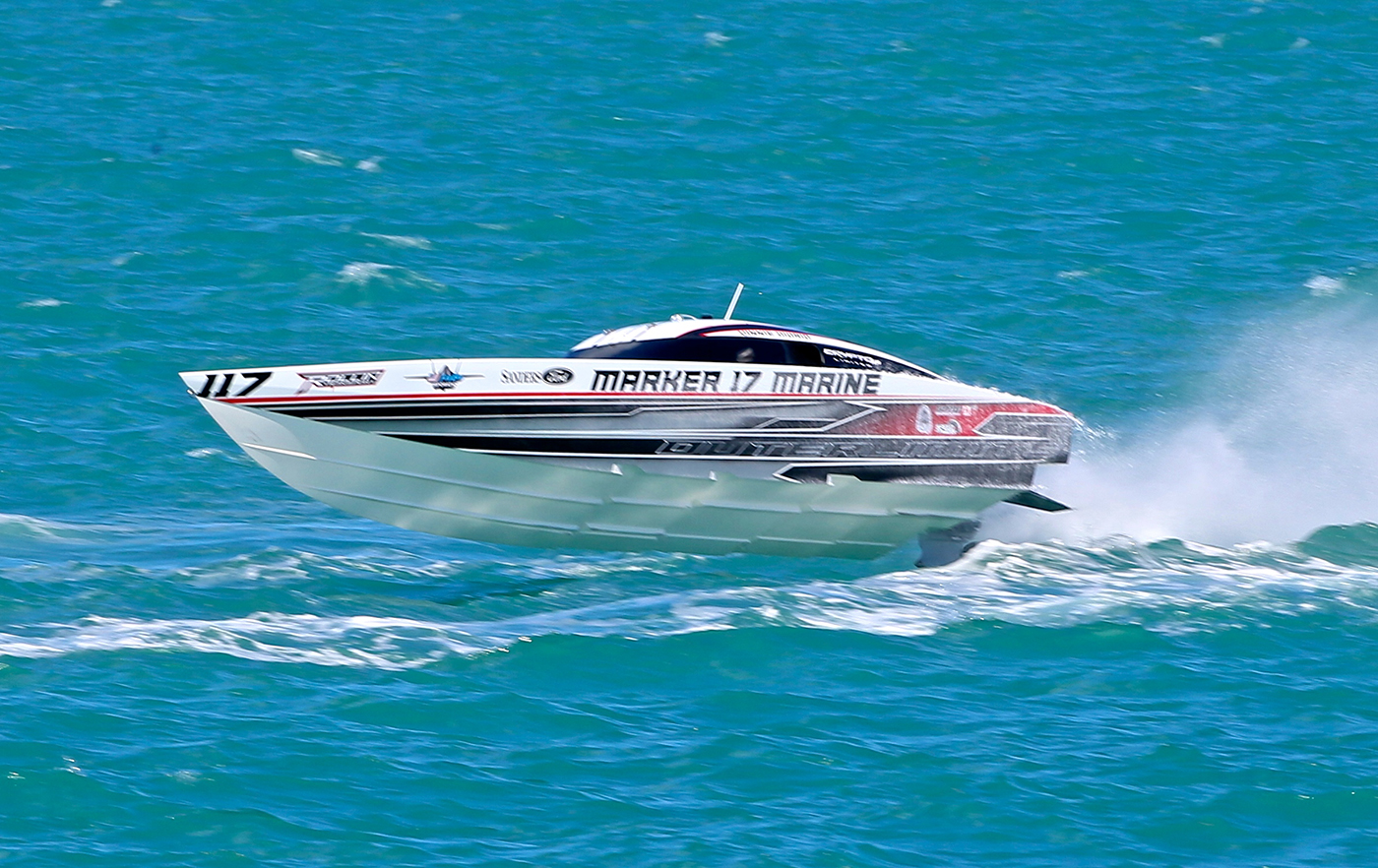 Outerlimits had to take the 2019 offshore racing season into account when choosing a date for its factory fun run. Photo by Pete Boden/Shoot 2 Thrill Pix.

“We probably lose five boats to Skater Fest each year and we will lose another five to the Outerlimits event this year,” he said. “But that’s just the way it goes. As I told the guys at the Western New York Offshore Powerboat Association meeting earlier this week, ‘This is our chance to go back to our roots—we need strong local participation this year.’ And I think we are going to get it and reach the 60-boat number we’re shooting for.”

To his credit, Scioli—who had already applied for permits based on his original dates—even tried to change dates for the run. But he came up against multiple issues. Templeton Landing, the host venue, couldn’t accommodate the event on another weekend all summer, which is its busiest time of year with weddings, banquets and such. Plus, Scioli quickly discovered that moving his event forward or a back one weekend would create a conflict with another event.

“I looked really hard and tried to change the dates, but I couldn’t,” he said, then laughed. “We’ll be fine. Thanks to Double R Performance of Canada, we have a great Canadian crew coming. And since Double R is a Nor-Tech dealer, they most own Nor-Techs so Skater Fest and Outerlimits Factory Fun Run isn’t of interest to them.”

Kleitz said that Outerlimits will help sponsor Scioli’s Erie Poker Run June 20-23 in Pennsylvania. Call it quid pro quo if you like, or just a nice gesture from one event organizer to another.

“I do feel badly about taking boats away from Tony’s event,” said Kleitz. “I really do. We looked at all the alternatives. That weekend was our best choice.”

That three go-fast boating events this season will share the same weekend is entirely unremarkable. Worth noting and appreciating, however, are the lengths two organizers with potentially overlapping participants went to in attempting to avoid it. Schedule conflicts aren’t always resolvable, but it’s nice to know that conscientious organizers try to eliminate them.