You are at:Home»Awesome»TNT Doing Dynamite Business

“I don’t mind going over there but it’s much easier for four days at a time rather than what I just did with seven days in Key West, home in Miami for three days and then off to Abu Dhabi for nine days. Between racing and testing, we were in the water seven days in a row over there.

“I like going over there and competing,” he added. “But at the same time you know there are things that are going to slip through the cracks when you’re gone that long and you’re as busy as we are.”

Not that Tomlinson, who’s seen his share of up and down economic cycles during his 30-plus years in the marine industry with partner Mike Thomas, is griping.

“The marine industry right now is just wailing,” he said. “Business is rocking and rolling. People are spending money, that’s for sure. People are ordering boats. We just referred an order for a new quad-outboard MTI center console to MTI — we’re an MTI dealer but we sent the customer there because he lives closer to the company. We’re selling used boats like crazy, from a $20,000 fishing boat to a $600,000 Cigarette 42 Huntress.

“I have no complaints,” he continued. “We’re busy with storage, repowers, rigging projects and service. We just don’t have enough guys to get it all done.” 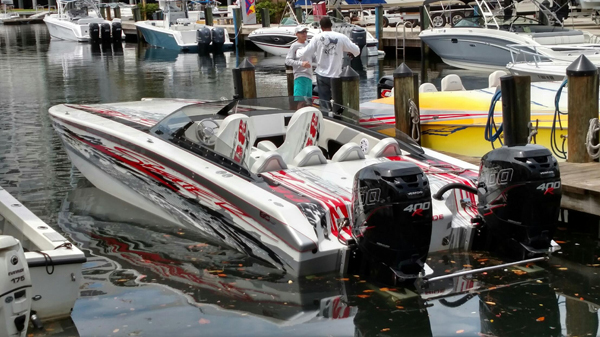 Repowered with Mercury Racing Verado 400R outboard engines, this 30-foot Skater was delivered in August to its Arkansas-based owner.

Tomlinson said he’s on his third Skater 30 catamaran repower where the owner has opted to swap the cat’s original Mercury Racing 300XS Optimax two-stroke direct-injected outboard engines for Verado 400R supercharged outboards. Skater 30 repower No. 3 is going to an owner in Texas — the first two went to owners in Arkansas and Florida. The Verado-powered 30-foot Skater catamarans ran in the 106- to 109-mph range in hot and humid Florida conditions before delivery to their owners, though Tomlinson said both reportedly picked up “two to three miles per hours” in cooler conditions with their owners.

TNT also is handling all rigging and installation of twin Verado 400R outboards for a brand-new 32-foot Doug Wright catamaran in the shop. Tomlinson said he expects the wide-tunnel Doug Wright cat to run in the 120-mph range, as have other Doug Wright 32-footers with the same power.

“All of the Verado 400 repower business coming through word of mouth,” said Tomlinson. “People are psyched about the Verados.”

That said, the daily grind at TNT Custom Marine isn’t necessarily as sexy as sport catamaran repower projects. A lot of the company’s business is simple routine service.

“Everyday service is our bread and butter,” he said. “And storage is big, too.”

Tomlinson said he has a simple yet potentially lucrative multi-boat outboard engine installation deal in the works, but declined to provide additional detail until “we have one of them finished.” The rigging side of TNT’s business, he added, continues to boom.

“Rigging has been great,” he said. “Next year we’re going to be more selective on some of these rigging jobs. Some of them linger on and on while we’re waiting for parts or upholstery or engines. We need to get them in and get them out. We need to keep things moving.”

On that subject—keeping things moving—Tomlinson is an expert. But right now, he’s just glad to be back home working long days.