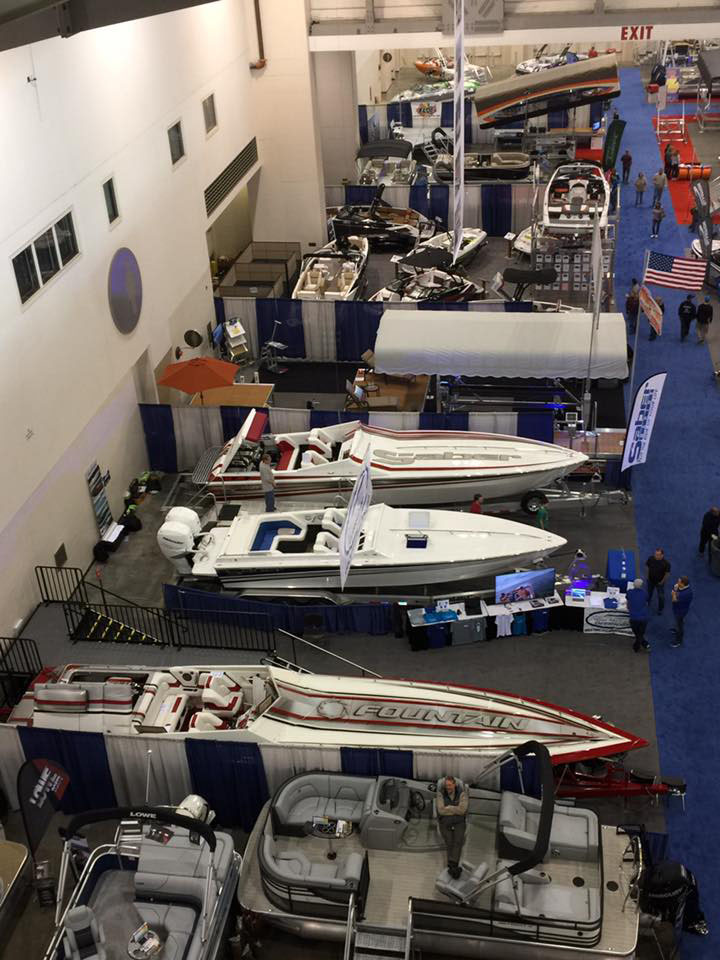 A West Michigan tradition, the 2018 Grand Rapids Boat Show is just a month away and the excitement is building with the local performance boat community. In a conversation with Chris Dekker, a founding board member of West Michigan Offshore, the Michigan native said that this year’s 73rd annual Grand Rapids Boat Show, which takes place February 14-18, is going to be one of the best in terms of go-fast boat representation.

The 32-year-old Dekker, who has attended the boat show since he was a kid, said he remembers being disappointed in the show year after year because it was “an endless sea of pontoons and ski boats.”

“I have nothing against those type of boats, but there’s only so many hundreds you can see before you’ve had enough,” Dekker explained. “I remember the board meeting where Roger Zuidema suggested that we try to work out a deal with the show to give us enough space to put a cool boat on display for free in return for allowing them to advertise to WMO members to increase ticket sales. I told him that I thought he was nuts and that there was no way a sold-out show would give up that much revenue-generating square footage for our then-new and relatively small club.

“Roger made a couple of calls, and I’m glad to say that he proved me very wrong,” he continued. “The first year, 2016, we had Bill and Monica Reiffer’s well-known 43-foot Checkmate Powerboats V-bottom on display, in addition to club apparel sales, offshore video on a big screen, membership opportunities and so on. Henri Boucher, the show’s manager, was incredibly generous in not only working with us on the space but also providing utilities, carpet, tables, a TV and a raised platform that we put next to the boat so people could look into the cockpit and engine compartment.”

Last year, Dekker said the club had Steve Niewoonder’s Fountain Powerboats 42 Lightning Ultimate Weapon on display. The boat, which the owner completely restored a couple of years ago, was another showstopper just like the 43-foot Checkmate. 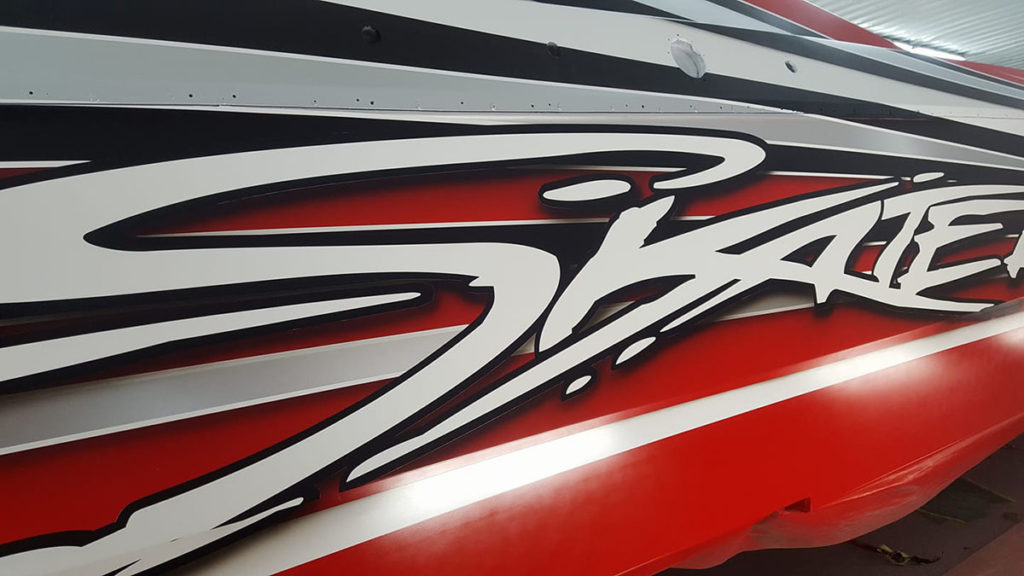 T&D Custom Painting in Zeeland, Mich., provided this teaser image of the 40-foot Skater that it is repainting before the boat is put on display at the Grand Rapids Boat Show.

“We had the most popular booth in the whole place, well besides Action Watersports, who had a bar in the middle of their display, but who can compete with that?” Dekker added. “What we can’t believe is how much interest the boat show has generated for the club and for offshore powerboating in the area. We get hundreds of people asking questions about the boat, the owners, the club, the motors, the paint and pretty much everything else you can think of. The first year we did the show—when the club was only nine months old—we gained more than 60 members that week from all the exposure it gave us.

“We’re particularly excited about this year’s show several reasons,” he continued. “The two V-bottoms we’ve brought have been stunning, but we’re changing it up this year by bringing a catamaran.”

Dekker said brothers Mike and Steve Bareman, who are charter members of WMO, are bringing their new-to-them 40-foot Skater Powerboats cat with Wesco Racing supercharged 1050 engines to the show. He thinks the boat should be a hit considering much of the public doesn’t get the chance to get up close to a cat like that.

“One of the coolest things about the Skater is the fact that T&D Custom Painting, a charter sponsor of the club, is applying a new paint job that’s sure to be stunning,” Dekker said. “Another particularly exciting thing about the 2018 show is the fact that both PowerQuest Boats and Bluefin Marine Consultants, both of which are club sponsors, have booths. PowerQuest is going to be right next to WMO and is displaying a 1999 280 Silencer that is being restored.

“The company is just getting off the ground now after new owner Neil Wallace began resurrecting it last year,” he added. “I’m hoping WMO’s well-publicized display will help give them exposure and vice versa. Bluefin’s booth isn’t next to the club’s, but it is in a great spot across the hall.”

Being that the boat show is so early in the year, Dekker said it provides a great avenue to promote offshore boating and it gives WMO members an opportunity to get together and talk boats in the middle of winter.

“I think the fact that a 28-foot PowerQuest is going to be next to a 40-foot Skater is a perfect reminder that WMO isn’t only about the triple-digit, six-figure-dollar boats, but also welcomes single-engine smaller boats to its events,” Dekker concluded.