You are at:Home»Industry»Chilling With Trond

Early Thursday evening during the 2020 Miami International Boat Show, Nor-Tech Hi-Performance Boats hosted a happy hour for customers, dealers, suppliers and a few other lucky guests. It was the perfect end to a fine opening day at the show, and Jason Johnson—my fellow offshoreonly.com columnist and speedonthewater.com publisher—and I looked forward to it all day.

What we didn’t expect was to find ourselves sitting in the open bow of a Nor-Tech 390 Sport center console, cold beers in hand, with Nor-Tech president and co-founder Trond Schou and Geoff Tomlinson, the Fort Myers, Fla., high-performance center console, catamaran and V-bottom sportboat company’s dealer manager. What had been planned as a quick meeting to discuss future editorial and advertising plans stretched into about 30 minutes of simply kicking back with the most influential Norwegian high-performance powerboat builder in United States history. 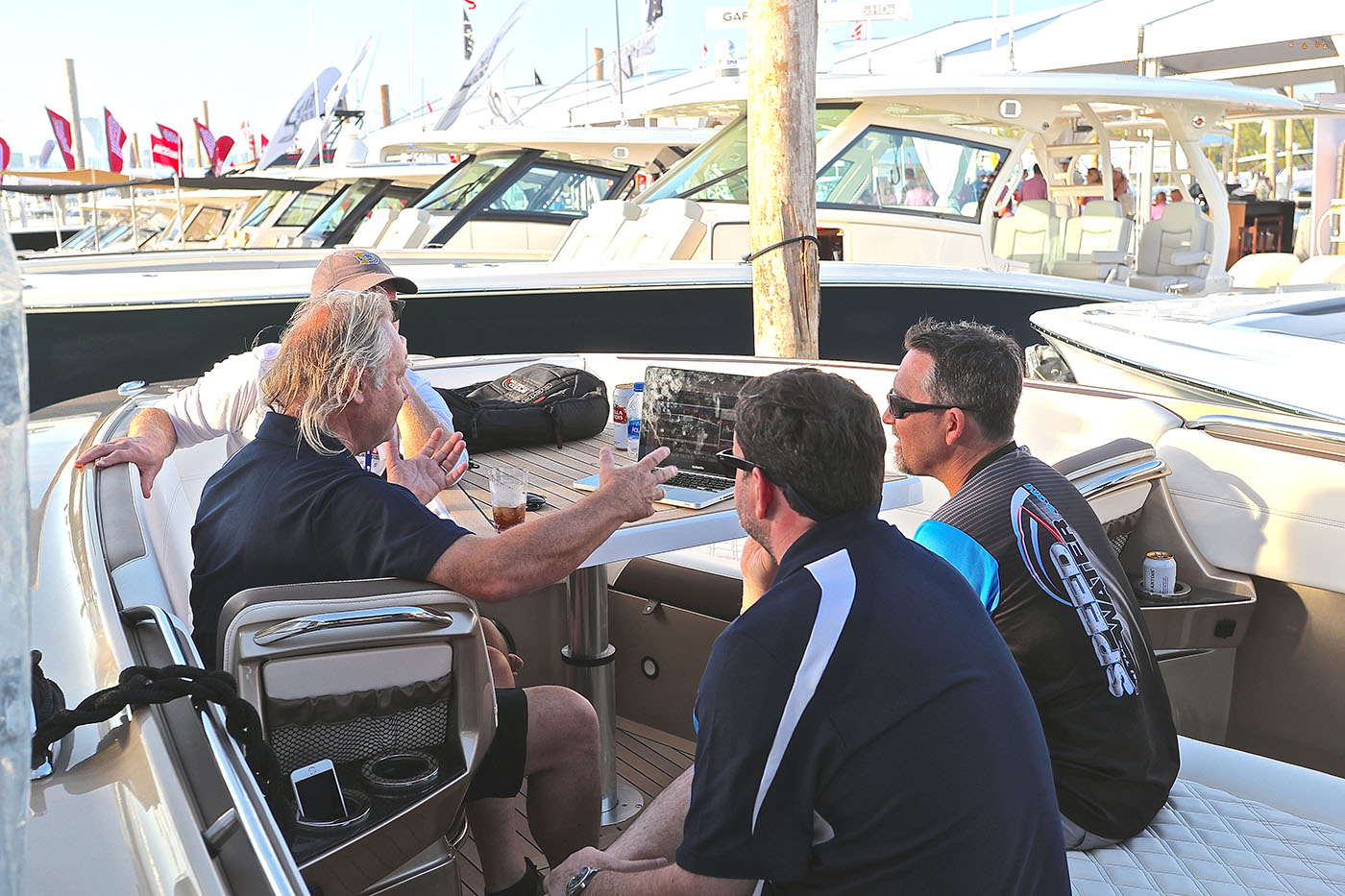 As most folks in the industry know, getting a half hour to just hang out with Schou isn’t easy, especially for media types who he tends to eye suspiciously. Like Nor-Tech’s brilliant designer and co-founder Nils Johnsen, the guy is seriously busy. He doesn’t have time for small talk, much less the inclination for it. That doesn’t mean Schou is opposed to having a good time—far from it—but during the Miami event in particular he tends to be all business.

Rightly so, Schou believes that much of his company’s achievements during the past 30 years have been under-reported. He understands the attention that’s been placed on the Don Aronows and Reggie Fountains of the world, but he feels that the Nor-Tech brand has made significant impact on the industry over the last three decades. And he isn’t wrong. 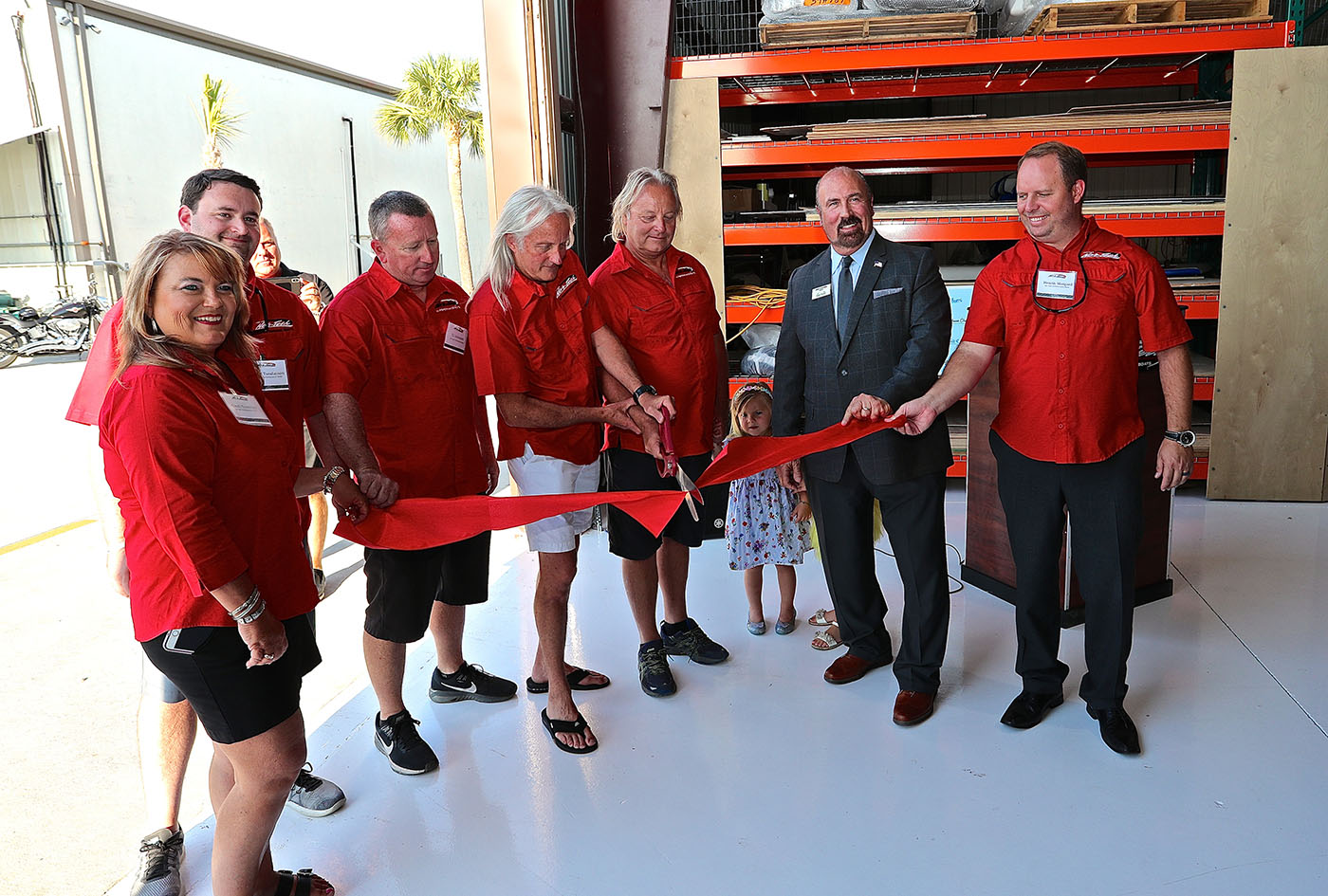 The Nor-Tech celebrated the opening of its Cape Coral, Fla., expansion in spring 2019 with Cape Coral mayor Joe Caviello.

“You know, 15 years ago when all these pleasure boat owners were trying to hit 200 mph to see who had the fastest catamaran, Xtreme Xhibit, a quad-engine 50-footer we built, went over 200 mph, and we hardly got any publicity,” he said, his thick Norwegian accent still fully intact. “That boat was a poker run monster. It even was ‘King of the Hudson’ one year.

“No one really wrote about it back then,” he added, then laughed.

I reminded Schou that in 1996 I was part of the Powerboat magazine test team that evaluated his company’s first 38-foot V-bottom sportboat called the 3800 Supervee. (The company’s first V-bottom actually was a 50-footer, as was Nor-Tech’s first catamaran model.) The boat had two rows of old-school, offshore racing-style, three-person, stand-up bolsters that passengers simply dropped into. They were snug, to say the least. 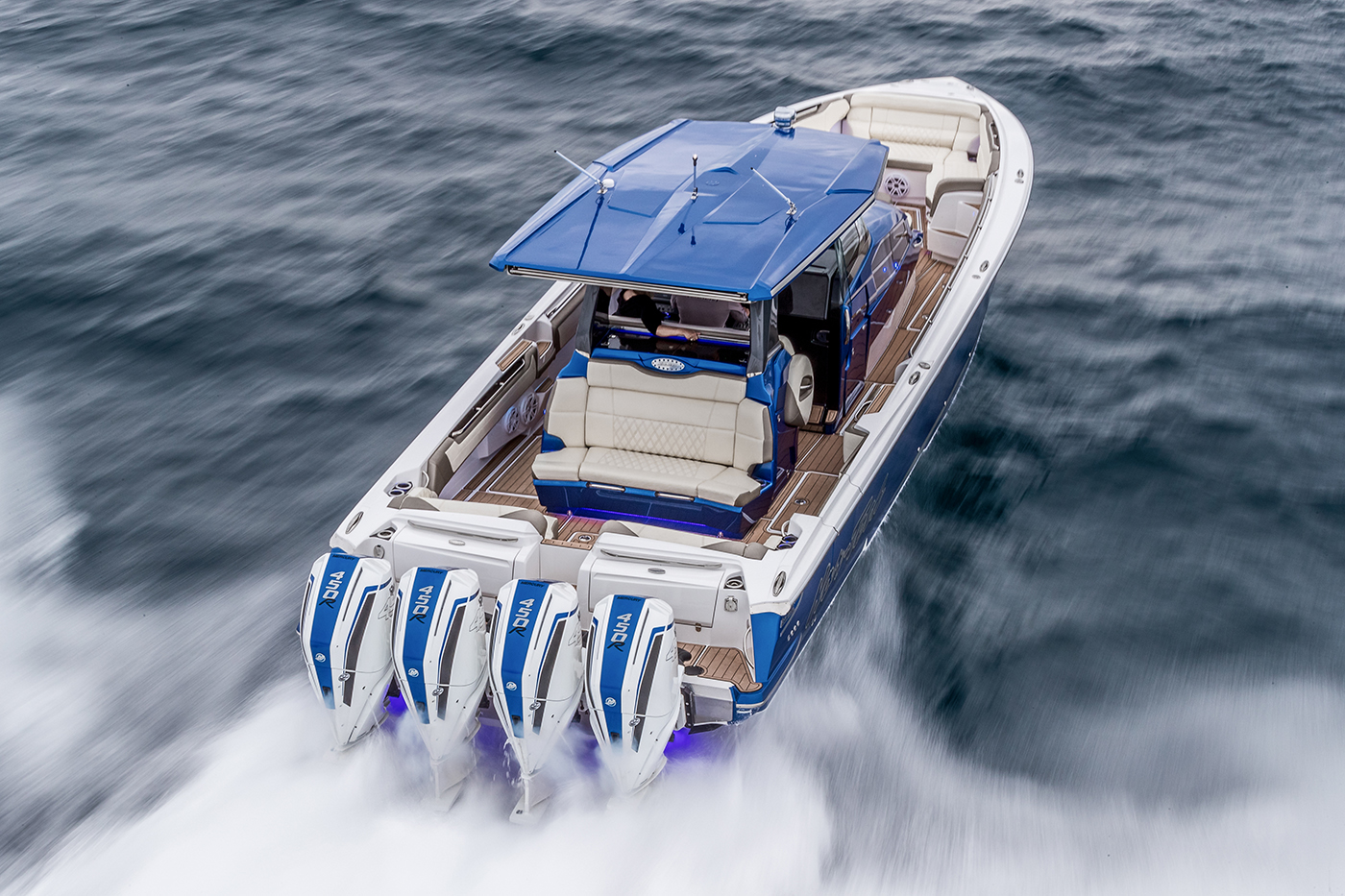 “I felt like a cork in a champagne bottle,” I told him. Schou laughed again.

“Yeah, but they held you in place didn’t they?” he asked with another chuckle.

A few years later, in 2001, Nor-Tech released its first catamaran dubbed the 5000 Supercat, a term that was not yet synonymous with offshore raceboats as it is today. A couple of years later, the company, which had grown to more than 50 employees, added a 36-footer to its lineup, and it soon became the company’s best-selling catamaran.

Among those 36-footers was a spectacular model called Perfect Storm that was owned by Bob Christie of New Jersey. Dressed in photo-sensitive graphics by Dean Loucks of The Art Of Design, the boat even made the cover of Powerboat magazine. 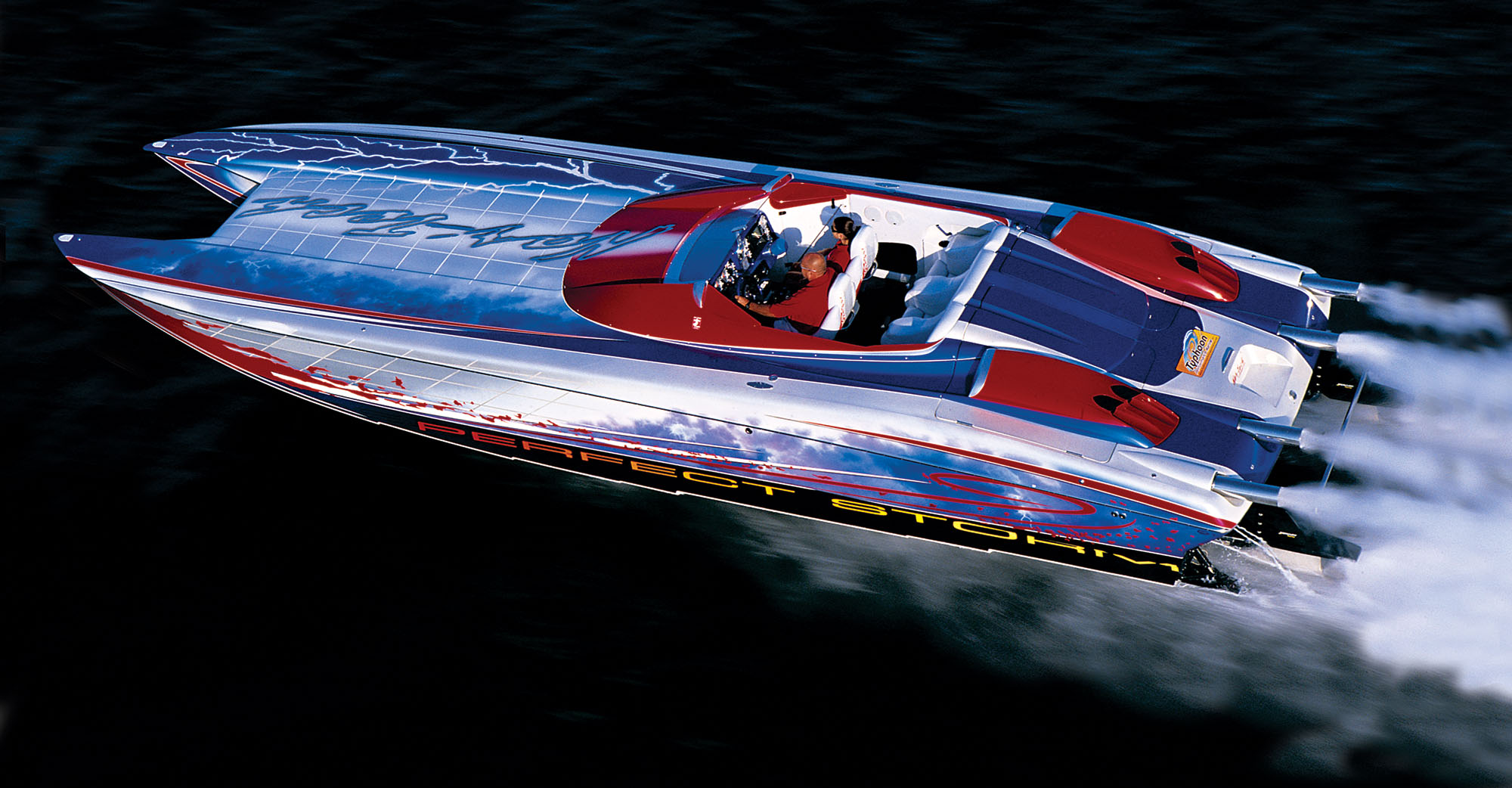 A Nor-Tech 3600 Supercat, Perfect Storm made the March 1994 cover of Powerboat magazine and claimed national recognition. Photo by Tom Newby.

“Yeah, that was a very pretty boat,” Schou said. “We built a lot of those 36s and each one was completely customized to the owner’s liking.”

But Nor-Tech’s biggest release happened in 2010 amongst a failing economy when it unveiled its first 39-foot center console, and that we happened to be sitting in one—more than 200 builds later—wasn’t lost on any of us. No high-performance powerboat company of catamaran and V-bottom sportboat fame has better reinvented itself with center consoles than Nor-Tech since the recession of 2008.

The company now boasts performance-focused center-console offerings from 34 (hull No. 196 is in the mold) to 56 feet. To move them, Schou and company have established a true dealer network with more than dozen locations. Today, Nor-Tech employs 155 people in South Florida and, thanks to its most recent expansion, has more than 100,000 square feet of production space.

But before we could venture down the center-console path of conversation, Schou had to depart. A potential customer needed his attention, so he politely excused himself. Just like that, he was gone.

“How cool was that?” Johnson asked. “We just hung out with Trond Schou and had a beer with him in one of his boats. That doesn’t happened very often.”

Tomlinson chimed in “No. It doesn’t.”

“That was a first for me,” I said. “And I’ve known him longer than both of you. Highlight of the show, for sure.”

Johnson agreed and—having finished day one of the Miami International Boat Show hanging out with a true legend in the go-fast powerboat industry—off we went. 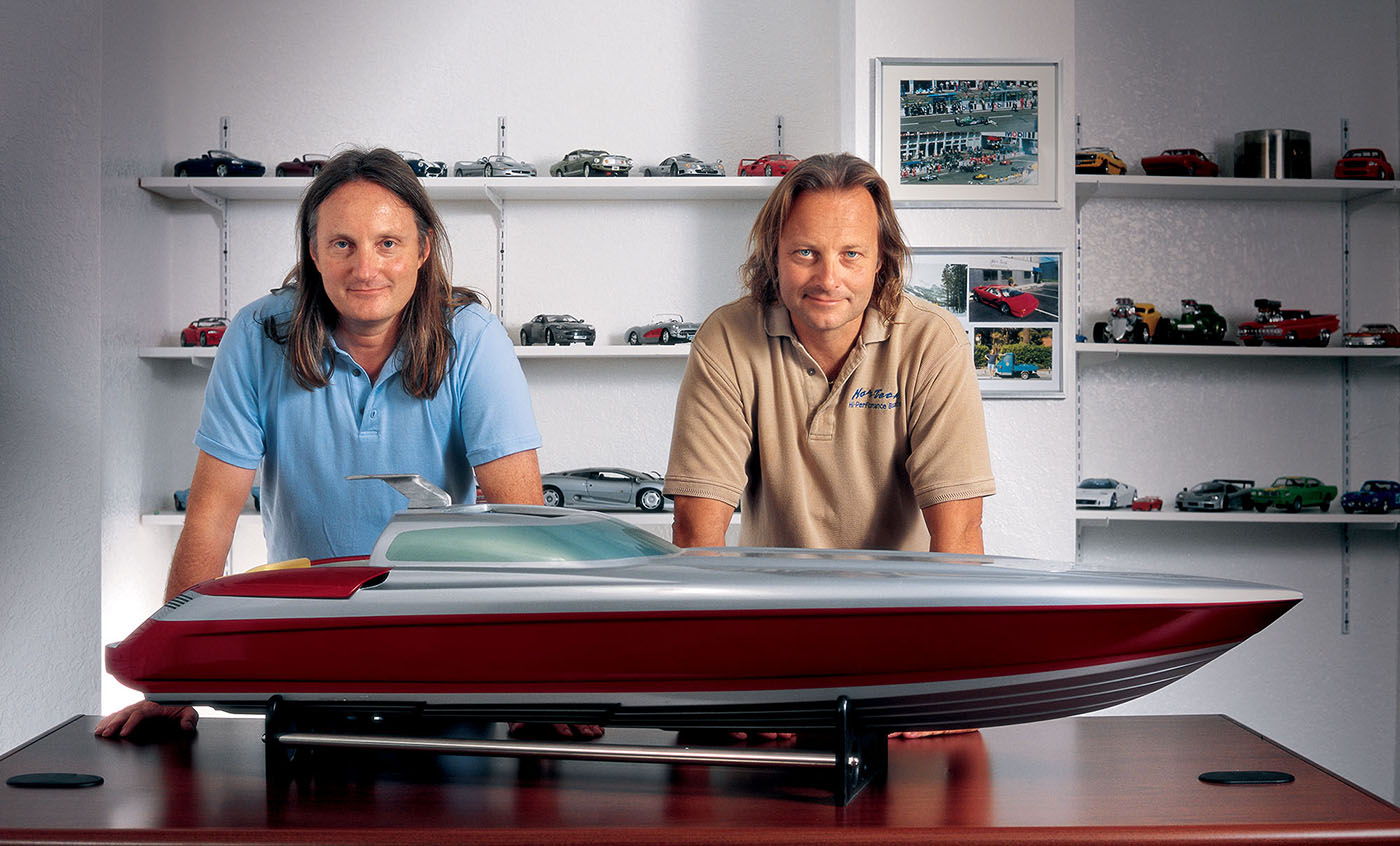 An early 2000s profile of Nor-Tech’s Nils Johnsen and Trond Schou captured the Norwegian duo at the beginning of its 80-foot sport yacht project. Photo by Tom Newby