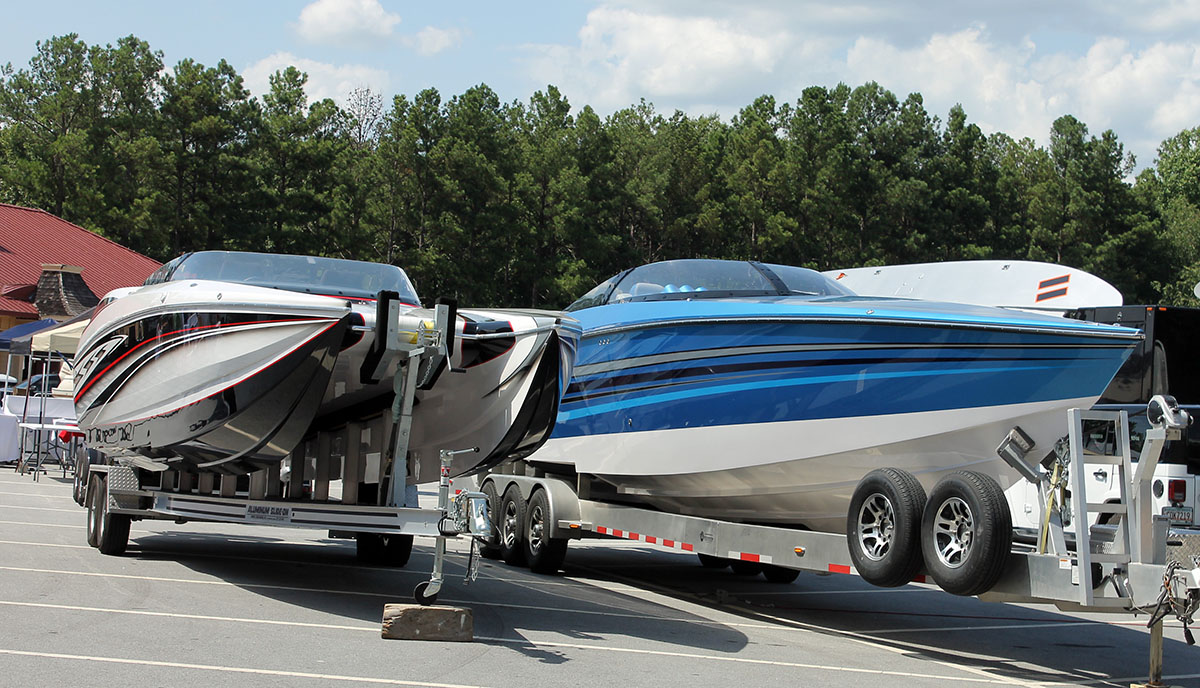 Sonic Powerboats showed off its sporty 32 Fast Cat and wave-crushing 42 Hyper Sonic models during the Pirates of Lanier Poker Run in Buford, Ga.

Smack dab in the middle of a busy poker run tour, Tony Canale looked and sounded exhausted as he sat down for an interview following Saturday’s Pirates of Lanier Poker Run in his hometown of Buford, Ga. Not only were he and everyone at Canale Marine, the full-service marine center he started more than a decade ago, helping prep three Sonic Powerboats models for display at the event, they were also working around the clock to get customers’ boats ready and assist out-of-town participants at the same time.

It appeared as if the multi-time world champion offshore racer has never been so busy—of course, my visit was timed with what is normally one of his busiest weeks of the year thanks to the poker run. But what’s compounded the responsibilities on his plate lately is his recent affiliation with Sonic, the venerable boat builder located in Fort Pierce, Fla.

His travels to events such as Smokin’ the Sound in Biloxi, Miss., the Erie Poker Run in Erie, Pa., and the Lake Cumberland Thunder Run in Kentucky the last two months have kept him coming and going from the family-run shop. The same goes for his visits to Fort Pierce to sea trial a boat or check in on the production of another. Fortunately he gets in a lot of work when he’s in town, and when he’s not, the fantastic team at Canale Marine, including his wife, Ginger, and his son, Nicholas, step up in his absence. 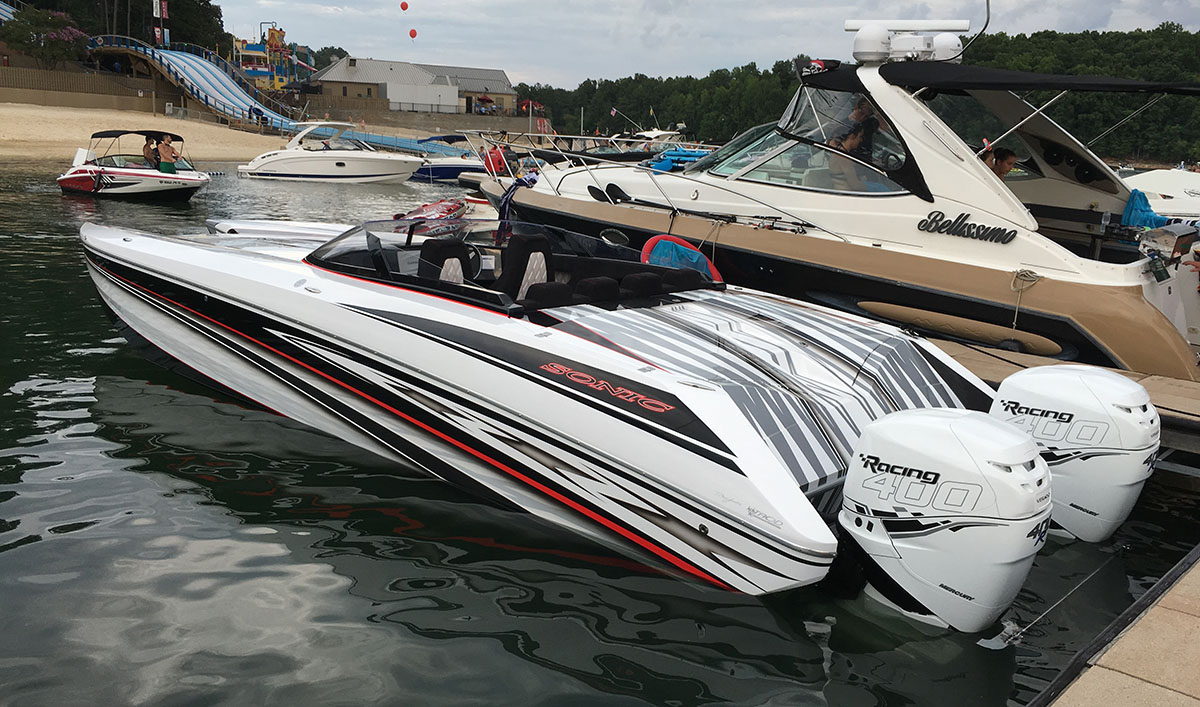 The Pirates of Lanier Poker Run was one of several must-attend events on Sonic’s list when planning where to take its 32-foot cat this summer.

According to Canale, he enjoys being busy. He’s also enjoying the pleasure side of performance boating more than ever before. Of course he credits Sonic and the renewed interest in the brand for making that possible. He points toward the company’s new 32-foot catamaran powered by twin Mercury Racing Verado 400R engines, which I got a chance to ride in after the interview, and gives it credit as well.

“That 32 Fast Cat is a great-running boat,” said Canale, who is planning to run the boat in this weekend’s Old Hickory Fun Run in Nashville. “It’s been a fun, safe boat to run, and it gets a lot of interest at the docks. I let people take their shoes off and come on board to see the quality for themselves. Only serious people get a ride.”

And journalists (wink). As mentioned, Canale and I ran the boat late Saturday afternoon before the poker run’s evening festivities began (we actually idled back in as the skydiver with a massive American flag in tow was landing at Lanier Islands). Unfortunately it was windy and raining on and off throughout the afternoon so the conditions weren’t great on the water. Still, the lightweight 32-footer responded well to the 400-hp engines. The midrange acceleration was quite apparent and the boat shot on plane in no time. 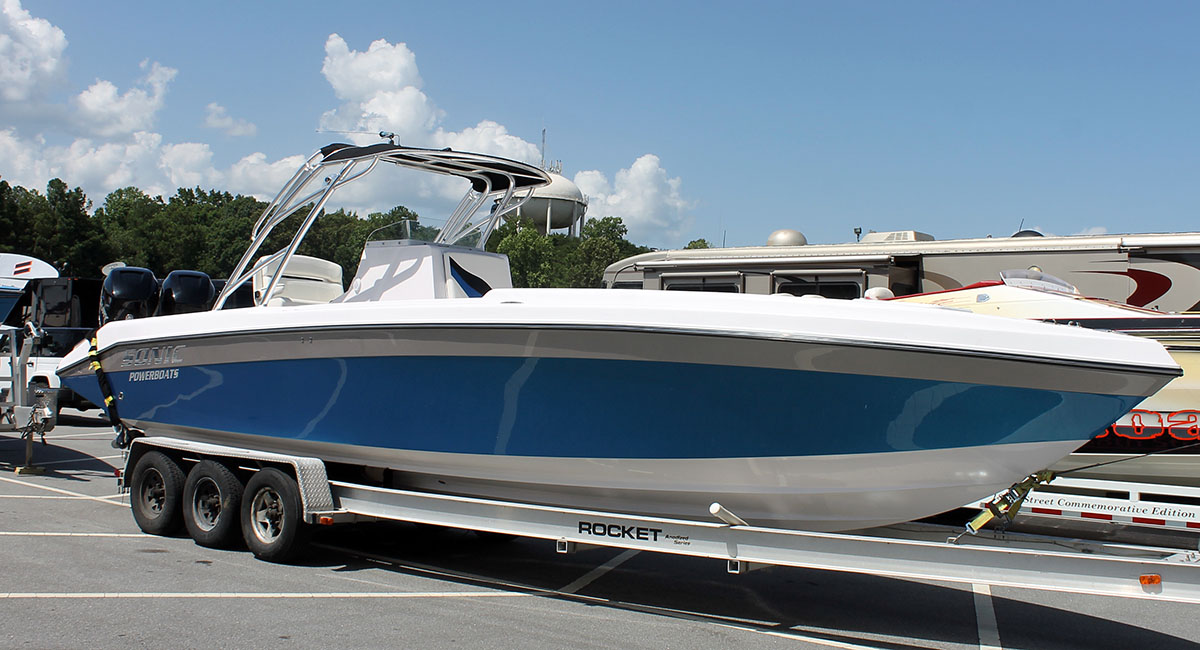 We cruised around for several miles between 60 and 90 mph and the boat, which tops out close to 110 mph, handled the 1- to 2-foot chop with ease (although Canale had to back off the throttles when we came across larger cruiser wakes and such). You could still feel the bumps—it’s a sport cat, that’s part of the fun of driving them—but you could also hear those bumps thanks to the boat’s light layup and empty engine compartment behind the cockpit.

Along with the 32-foot cat, Sonic also had a new 32-foot center console entered in the poker run—the straightforward blue and gray V-bottom powered by twin Mercury Verado 300 engines got plenty of attention in the water and in the Sunrise Cove vendor area—and a pre-owned 42 Hyper Sonic V-bottom with twin Mercury Racing 1100 engines that was at the docks on Friday and Saturday.

Canale added that Sonic’s rigging crew is hard at work on the second 32 Fast Cat, which is going to have Mercury Racing 565 engines, and that hull No. 3 is out of the mold and hull No. 4 just went into the mold. He also hinted at some news to come regarding the reintroduction of Sonic’s  358 Super Sonic.

While he recognizes that Sonic has gone through a multitude of changes in its history, Canale believes the brand is headed in the right direction with a nice diverse lineup of models in the three performance segments—sport boats, catamarans and center consoles. He also believes he can help Sonic continue to move forward.

That’s exactly why you’ll see him at the Old Hickory Fun Run, the Emerald Coast Poker Run, the Key West Poker Run and more this year.