You are at:Home»Racing»Parveys For The Course 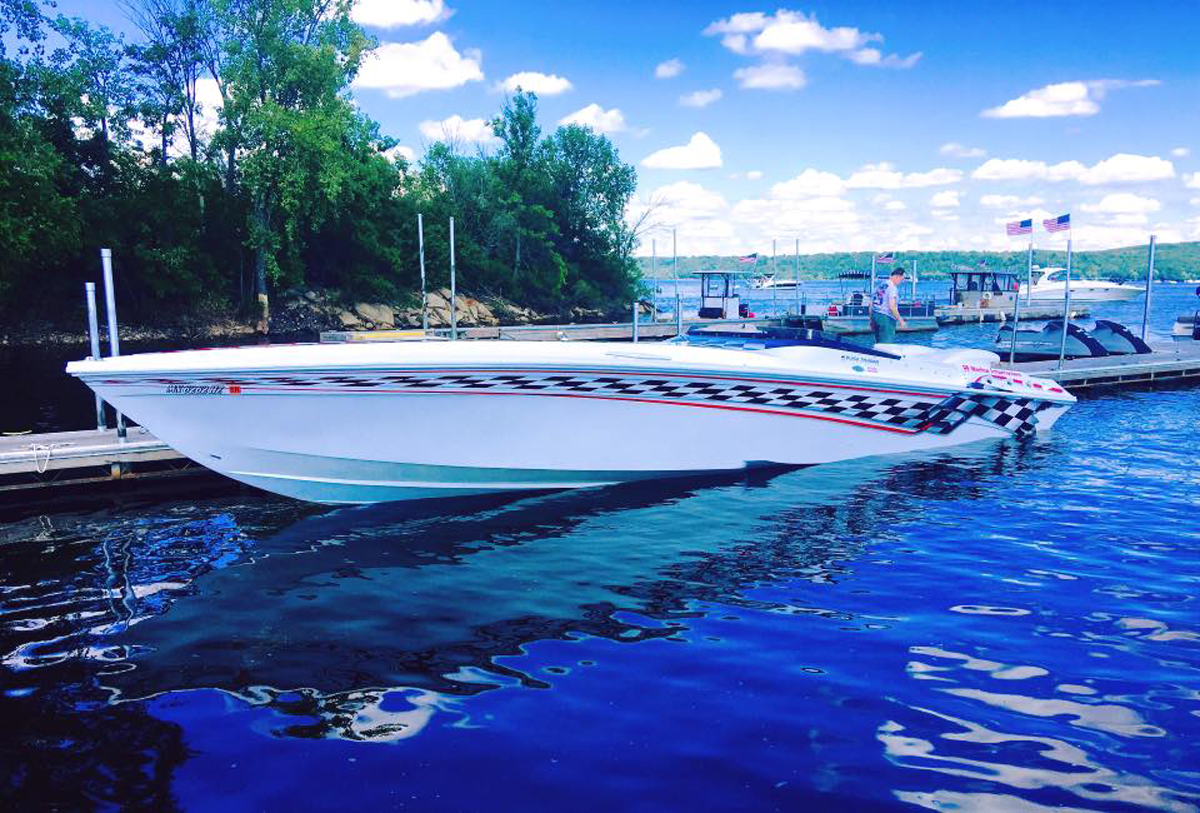 The Parvey’s 43-foot Black Thunder was the fastest V-bottom in the 2015 Lake of the Ozarks Shootout.

Jason Parvey’s sense of humor isn’t dry. It’s arid. Parched, even. Ask him why he and his father, Dennis, plan to push their 43-foot Black Thunder V-bottom past 140 mph this year at the Lake of the Ozarks Shootout in late August and you get this:

“We don’t know any better.”

Then you hear something that easily could be mistaken for a soft laugh.

Ask him who enjoys the annual top-speed contest in Central Missouri more, his father or him, and—once again—you hear something not unlike a soft laugh. Then this:

“I’m a bad influence on my dad.” Then another soft laugh sound.

Dennis Parvey, who is 66 years old and still lives in Ham Lake, Minn. (Jason lives in Dallas), started competing in the Shootout in the early 1990s. In 2000, he purchased his current 43-footer and he took it—along with his then 15-year-old, wide-eyed son—to the event. Now 29 years old, Jason joined his father in the cockpit at the Shootout in 2012 and hasn’t been out of it since. Last year, the father-and-son duo laid down an impressive 145-mph top speed, making the boat, which boasts twin electronically fuel-injected supercharged engines each making close to 1,700 hp, the fastest V-bottom in the 2015 Shootout fleet.

Dennis (left) and Jason Parvey. Said Jason, “It’s just fun to go out and see what we can do.”

Dennis handles the driving, throttling and trim assignment. Jason watches the gauges. Both hope to top the personal-best speed mark they set during last year’s Shootout, but they’ll be just fine if they don’t.

“I would be happy if we’re around the same mark,” said Jason. “It’s just fun to go out there and see what we can do.

“There aren’t a whole lot of V-bottoms running that speed and it’s not something we do every weekend,” he continued. “I think the number of people who have driven a V-bottom at that speed is pretty limited, but Dennis does a good job keeping the boat in balance. You can’t fall asleep, but for all intents and purposes the boat feels pretty good at that speed.”

Oh yeah, Jason calls his dad by his first name, at least when he’s not around. “I used to work in his office—Dennis is a dentist,” said Jason. “I though it sounded better than calling him dad.”

They get along in the cockpit. They don’t argue. “Well, you always discuss things,” said Jason.

And they’re definitely looking forward to competing in this year’s Shootout. They even took the boat out for a test session on Ham Lake last weekend.

“That new Outerlimits SV 43 and Joe Sgro’s SV 43 are coming and they both have 1350s,” said Jason. “It will be interesting to see what everyone does.”