You are at:Home»Awesome»Not As Busy As Brett

As I usually do the week leading up to the Lake of the Ozarks Shootout in Missouri, I started mapping out my calendar of happenings for the annual event. In doing so on Tuesday, I was thinking to myself that it’s going to be quite a busy week. This being the 30th anniversary and all, not to mention that I’ll be catching a flight to St. Louis on Monday—after covering this weekend’s Big Cat Poker Run in Northern California—so I can get to the lake in time for Tuesday’s Lake of the Ozarks Shootout Hall of Fame ceremony. That reminds me, I still have an induction speech to write.

Still, while I seem busy, I realized my situation is a breeze compared to what Performance Boat Center’s Brett Manire has going on. I know because I asked him about his plans for the week, and he told me his Shootout preparation began a couple of weeks ago between scheduling, prepping the facility, getting displays set up, making sure boats are ready for customers to enjoy the event and much more. 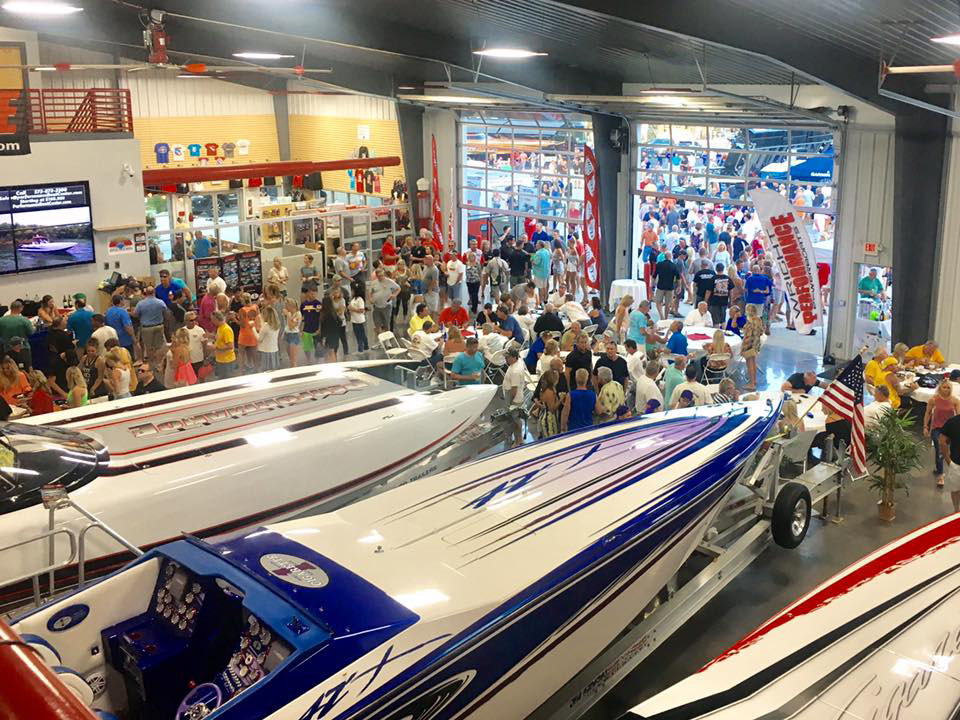 I caught up with Manire quickly on Tuesday afternoon as he was off to catch a flight to Michigan to visit the Sunsation Boats factory to check in on a new boat that is going to be showcased next week at Lake of the Ozarks. Not only was he consumed with Shootout prep, he said the Performance Boat Center/Jimmy John’s Freaky Fast offshore racing team—a skeleton crew, he added—left on Tuesday for the Race World Offshore event this weekend in Dunkirk, N.Y., and there were a couple of new Wright Performance Powerboats 360 cat rigging jobs being completed by the end of this week.

Although I expect my time with Manire to be limited next week—it usually is—I should be crossing paths with him several times as the company he owns with business partner Mark Waddington is being inducted into the Bob Morgan Memorial Hall of Fame as well. That happens Tuesday evening at The Stables at Cannon Smoked Saloon. On Wednesday I’ll run into him a few times during the Shootout on the Strip street festival on Bagnell Dam Boulevard, then I’ll likely see him at the Speedonthewater.com Mercury Racing Verado 400R Sport Cat Roundup at Super Cat Fest at Camden on the Lake on Thursday, followed by the one-of-a-kind welcome party hosted at Performance Boat Center on Thursday night. 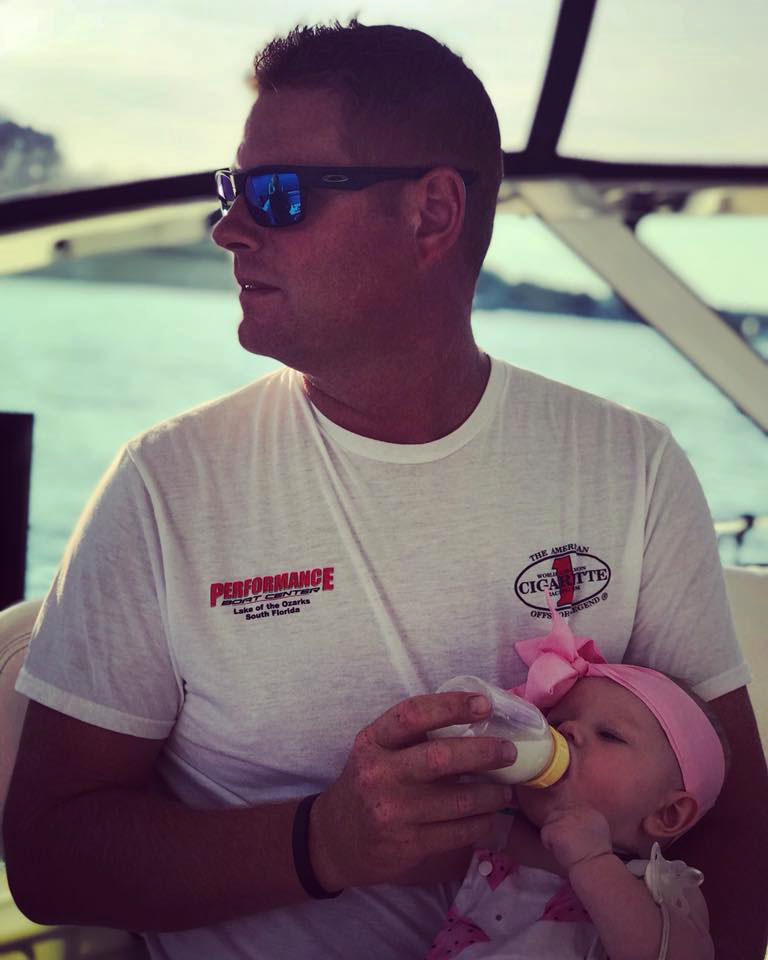 With frequent travel to Florida and weekend events aplenty on the lake, Brett Manire tries to spend as much time as possible with his wife, Mackenzie, and their six-month-old bundle of joy. Photo courtesy Meg Manire Rutledge

On Friday? Who knows, but chances are good I’ll have a Manire sighting. Maybe I’ll even be lucky enough to meet his baby girl. I know with certainty we’ll converse Saturday and Sunday as Performance Boat Center—the title sponsor of the Lake of the Ozarks Shootout—is going to have a full display of boats at the docks on both days of the top-speed contest.

Busy as can be, Manire hasn’t lost sight of the reason he and the rest of the team at Performance Boat Center continue to work their tails off during Shootout week—the substantial impact the event has on more than 30 local charities (read the story).

“We really love being an integral part of the Shootout—the event means so much to this community, the local economy and the charities,” Manire said. “The event also attracts a ‘who’s who’ list of performance boaters and industry icons who come out to the lake to see how we do things around here. We enjoy showing off our skills as the focal point for performance boaters on Lake of the Ozarks.” 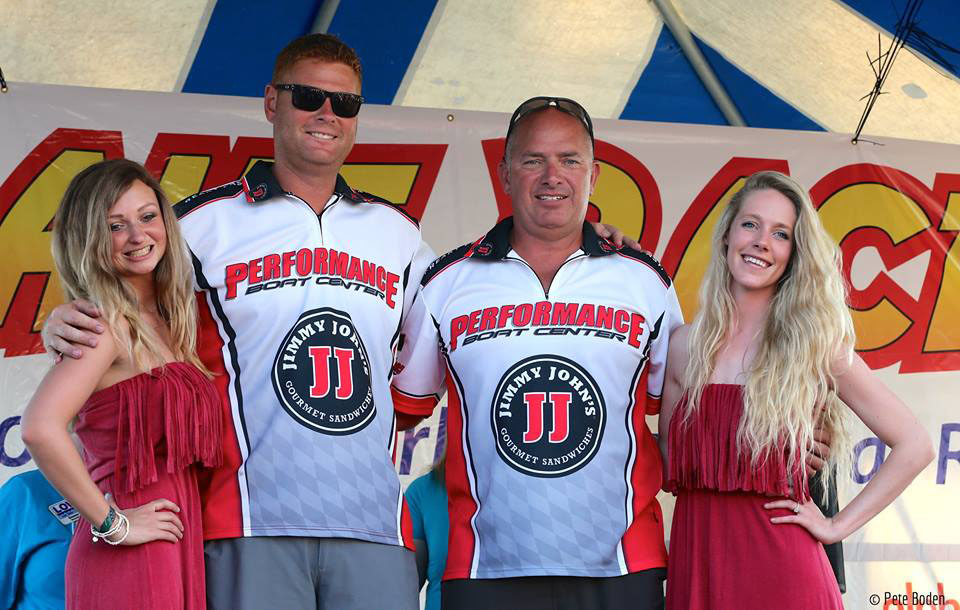 Brett Manire and Mark Waddington are going to be honored next week as their business is being inducted into the Lake of the Ozarks Shootout Hall of Fame. Photo courtesy Pete Boden/Shoot 2 Thrill Pix

Ron Duggan, the defacto leader of the committee behind the Lake of the Ozarks Shootout, said the event—more importantly the amount of money it raises annually—wouldn’t be where it is today without Performance Boat Center.

“Performance Boat Center took this event to a whole new level in terms of donations compared to where we were at the first five years we hosted it at Captain Ron’s,” said Duggan, who owns Captain Ron’s Bar and Grill in Sunrise Beach. “They brought a lot of money to the table to add to the pot, which in turn has helped us get more sponsors and grow the pot even larger.”

Fortunately for Manire, he doesn’t have to worry about actual Shootout organizational details. Mainly he just needs to keep to his tight down-to-the-minute schedule and make sure the PBC team is ready to take care of the local and out-of-town guests who are also putting together their “busy” schedules for next week.

Like me, those schedules probably don’t seem as busy now though. Best of luck to Manire and company.