You are at:Home»Community»The Hosts With The Most

From the wrap to the re-rigging, Craig Mears was pleased with the upgrades that were done recently to his Skater 308 catamaran powered by twin Mercury Racing Verado 400R engines. Photo by Pete Boden/Shoot 2 Thrill Pix

As I sat cozily in my Southwest Airlines seat during my flight to New Orleans last week with a stop in Houston, I knew I was in good hands heading to my first Tickfaw 200 Poker Run in Springfield, La. Not just because I had reported about the event for several years or because I knew organizers Joey Fontenot and Casey Harrison would point me in the right directions at Blood River Landing or because photographer Pete Boden also was going to be there with me, it primarily had to do with that fact that Louisiana performance boaters Craig and Patti Mears—two people I’d never met in person before showing up to find my room at their house on Wednesday night—have treated me so nicely since I “met” them doing a speedonthewater.com story a few years back. 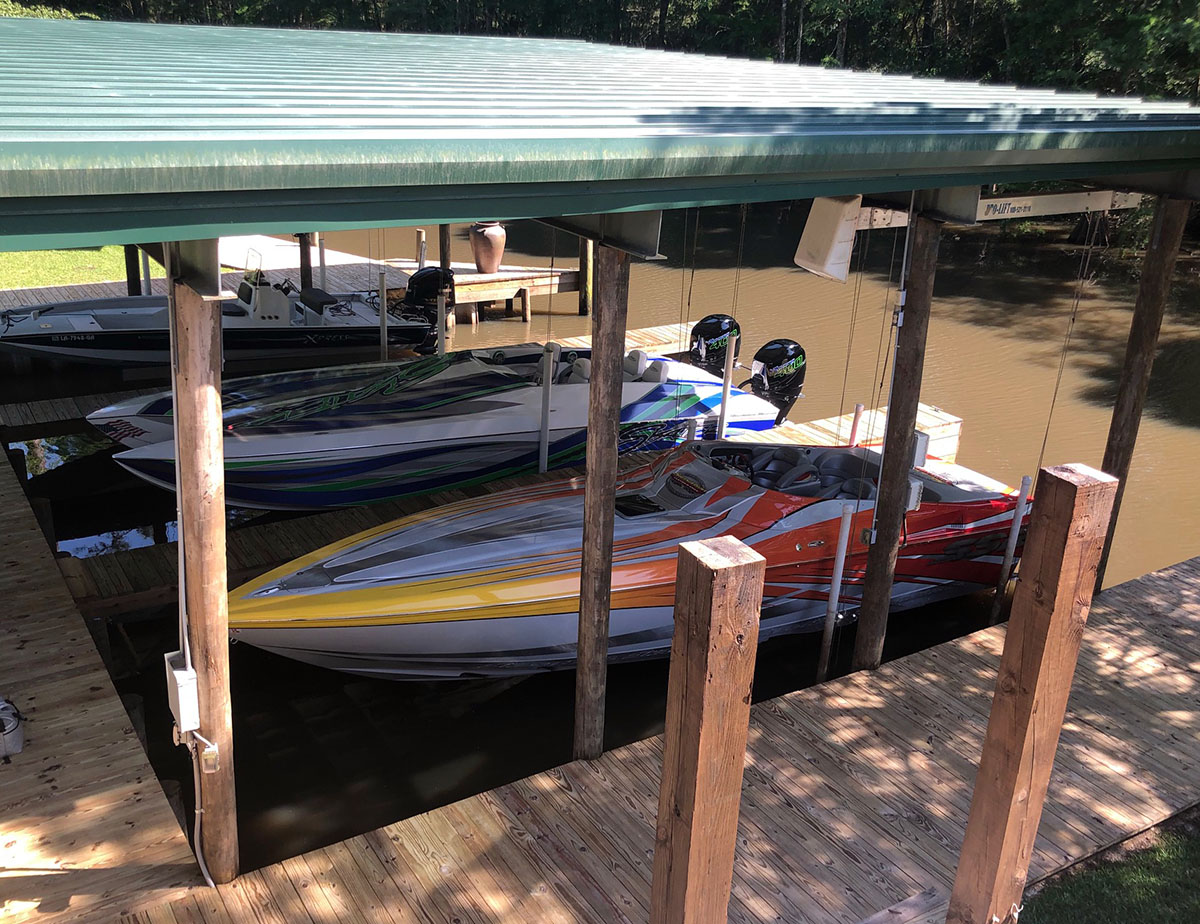 Craig and Patti Mears have a few choices for when they want to go boating from their home on the Tickfaw River in Louisiana. Photos by Jason Johnson

The husband and wife, who live on the Tickfaw River in Springfield and grew up in and around the Bayou, own a 32-foot Sunsation Boats sportboat with twin MerCruiser 496 Mag engines and a 30-foot Skater Powerboats catamaran with a pair of Mercury Racing Verado 400R engines, both of which sit on covered lifts next to the couple’s aluminum Xpress Boats fishing boat. Two of their friends’ boats—Sam Jirik’s 30-foot Skater and Shane McFall’s 36-foot Baja—were tied up to their docks. Both of them were staying at the Mears’ welcoming abode, which played host to a bona fide crawfish boil on Thursday afternoon that was quite a treat for this California boy and the other 50-plus people who joined the fun.

Not only did I eat the tails and suck the heads of the crawfish—and devour some of the accompanying tasty corn, mushrooms, potatoes and sausages—that Craig cooked up for all of us, the next day I got an incredible tour of the local rivers and lakes while sitting shotgun with him in the sporty Skater 308 that he recently improved with help from Nick Compton and the team at Island Audio in Maurepas. 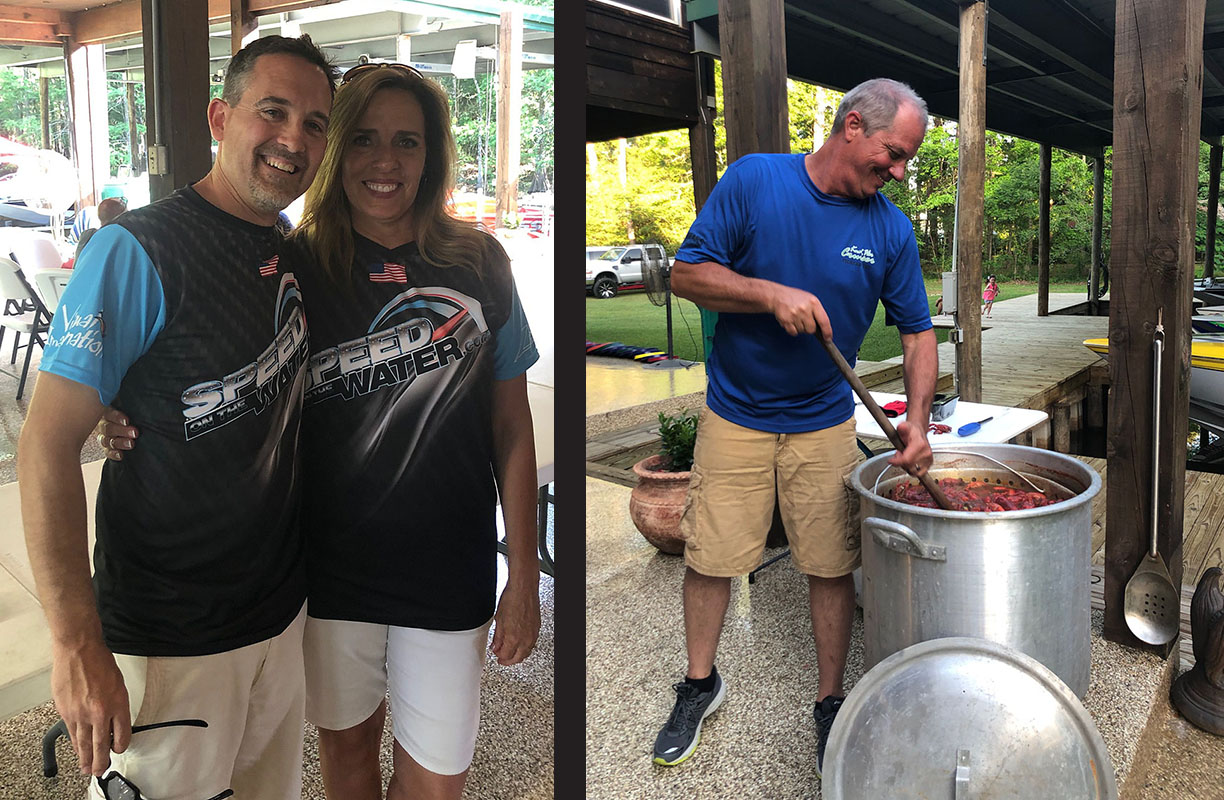 Jason Johnson was happy to be part of the crawfish boil hosted by Patti and Craig Mears during the Tickfaw 200 Poker Run.

As we ventured over to Madisonville on the Tchefuncte River via crossings on Lake Maurepas and Lake Pontchartrain, Craig seemed extremely pleased with the changes that were done to his boat, including the through-transom and through-bulkhead rigging passages that were neatly finished, the electric hidden hinges that powered the storage hatch quickly and smoothly, the SeaDek flooring and storage compartment lining, and the color-matched battery boxes and bezels for the speakers and accessory switches. Electronics wise, Island Audio added a TrimSync system from Marine Design Corporation to keep the twin outboards level, a Mercury VesselView display in the center of the dash and a Garmin GPS screen to the right, along with color-changing LED throughout.

Compton and his team also fixed the pop-up windscreens. Mears said they went up and down (and stayed up) way better than before and were much clearer thanks to some serious buffing and polishing. I appreciated the one in front of me, that’s for sure. Craig also was proud of the boat’s new graphics, a well-designed blue, green, gray and white wrap handled by Lion Grafix in Slidell. 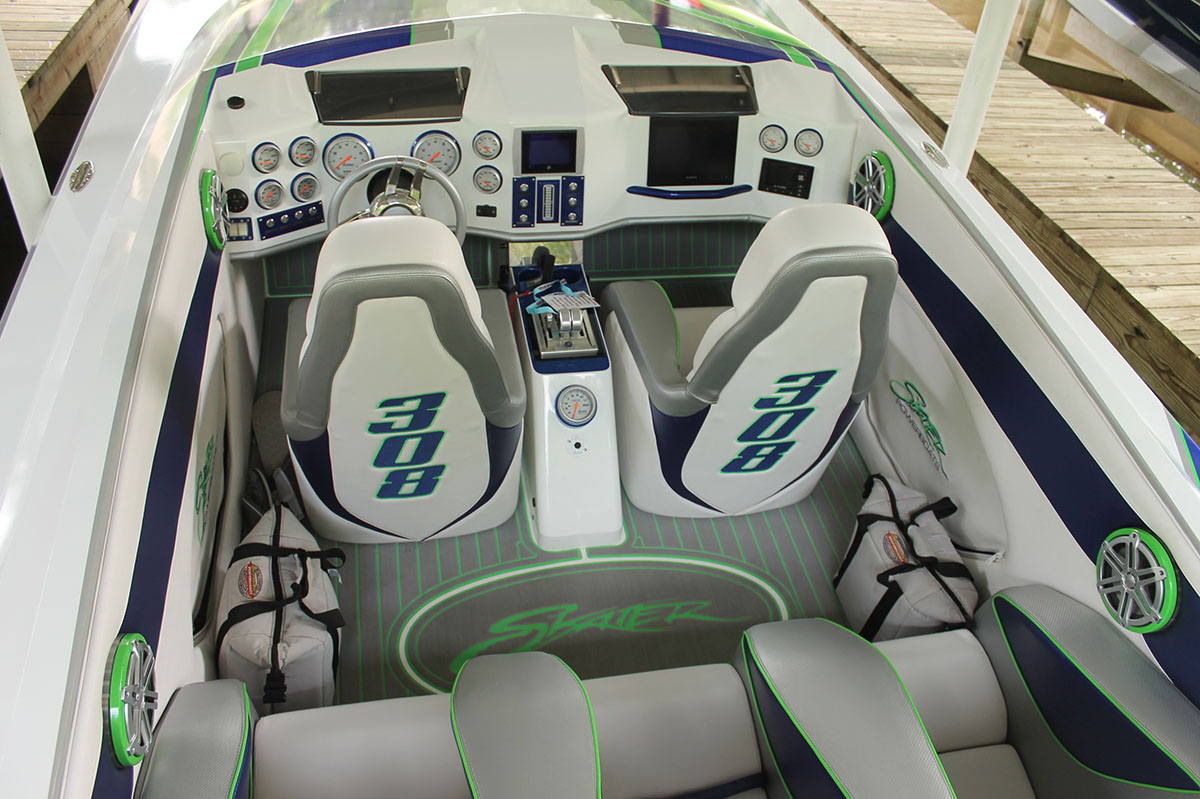 The Mears’ Skater 308 received several upgrades recently from the team at Island Audio.

I briefly mentioned that the Mears’ beautiful home was welcoming, which has a lot to do with how open and spacious it is with a couple of conversation areas, including an island in the kitchen that we gathered around for breakfast and an impressive bar flanked by two full-size pirate statues, a skeleton one and a busty female one. There are also pictures of the family boating locally and in Key West, along with a loft with framed posters from Tickfaw 200 Poker Runs from the past decade or more. That was pretty cool to see.

As I squeezed back into my cozy—I use that term loosely—Southwest seat leaving New Orleans, I couldn’t help but think about all of the wonderful Southern hospitality that was delivered during my stay in the Pelican State. Full disclosure here, I had to look up the state nickname for Louisiana; I had no clue what it was. Either way, what I do know is that the Mears and everyone in the Pelican State understands how to treat a visitor.