You are at:Home»Industry»The First Outerlimits Lives

What was promised by my colleagues during the 1997 Powerboat Magazine Performance Trials as my first 100-mph boat ride came up three miles per hour short. And from the copilot’s seat of an Outerlimits Offshore Powerboats 37 Stiletto, the only model the company made at the time, I could not have cared less.

Riding with Bob Teague, the magazine’s lead test driver, in the 37-footer powered by twin 800-plus-hp Richie Zul engines, I felt like I was flying. The wind noise and pressure reminded me a lot of skydiving—my hobby at the time—but the experience was a bit scarier because I had no control. 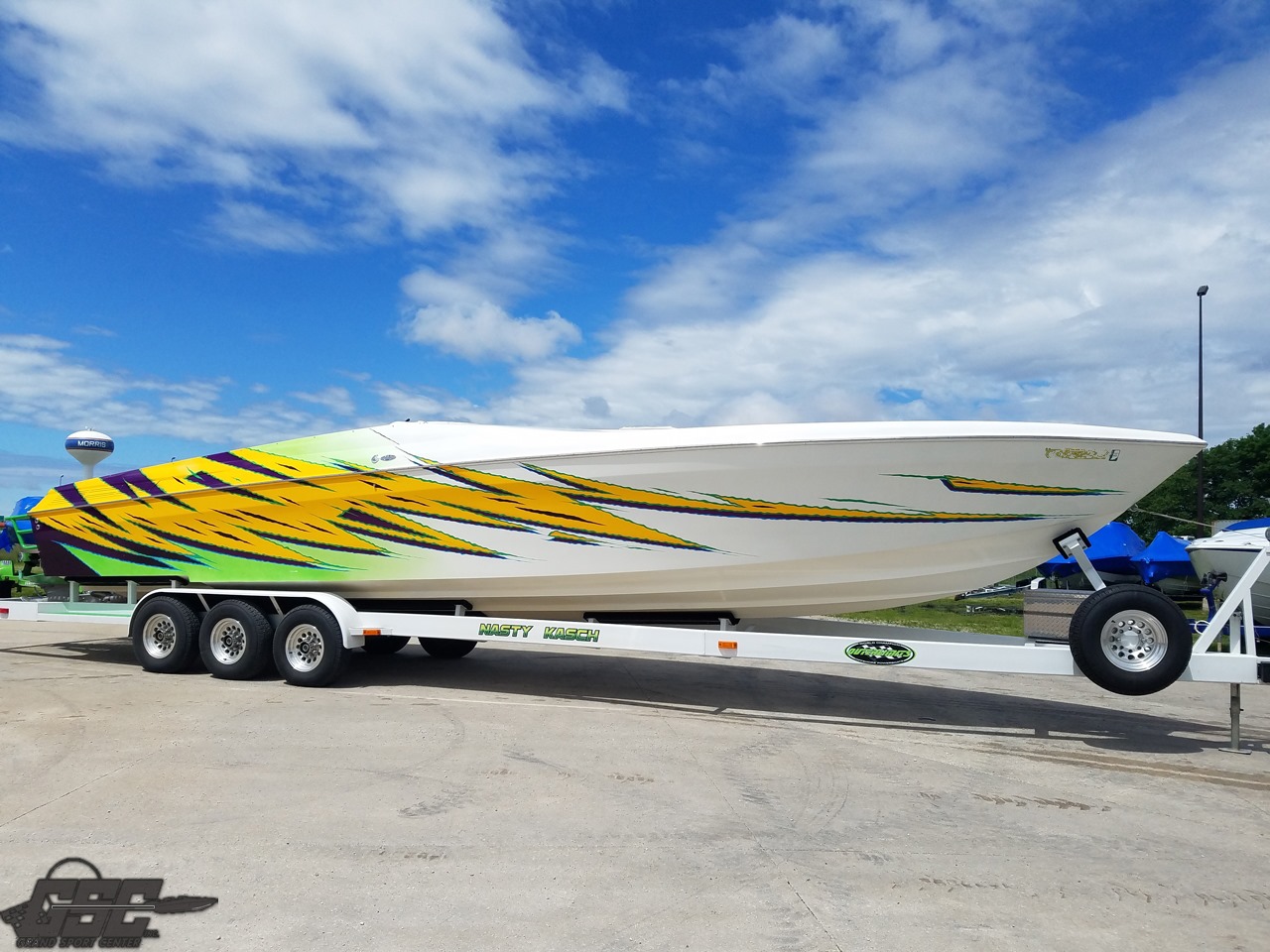 The first Outerlimits built, this 37-footer originally went to Bob Russell, who would become a longtime Outerlimits customer.

Freefalling through the sky was familiar territory. But rocketing across the water at near-freefall speeds? Not so much.

Of course, I never forgot the experience. So when Outerlimits Offshore Powerboats sales manager Dan Kleitz posted something about the first 37 Stiletto ever built being up for sale at Grand Sport Center, Inc., a pre-owned performance-boat sales, consignment and brokerage operation with two operations in Northern Illinois, I had to take a closer look.

Built in 1994, the 37-footer isn’t just the first Stiletto. It is the first Outerlimits, the first creation from company founder Mike Fiore.

Grand Sport Center specializes, according to co-owner Jerry Gianfrancisco, in selling pre-owned performance boats on trailers for no more than $100,000. With an asking price of $79,950, the 37-footer, which is powered by a pair of approximately 800-hp MerCruiser 502 EFI engines equipped with Procharger superchargers, fits that description.

Gianfrancisco and company discovered the boat after its current Indiana-based owner responded to an email blast—Grand Sport Center always is looking for inventory that meets its $100,000-and-below criteria.

“It looks like it’s in great shape,” he said.

From its deep cockpit to its muscular lines, this 37 Stiletto would be difficult to mistake for anything other than an Outerlimits.

What a difference 25 years makes. Built at the original Outerlimits facility in East Moriches, Long Island, NY., the 37 Stiletto is long gone from the Outerlimits line and the company relocated to its second—and current—location in Bristol, R.I., yeas ago. It has been replaced with a line of exotic V-bottom sportboats from 29 to 52 feet long, as well as 39- and 46-foot catamarans.

But one glance at hull No. 1 is all it takes to know the boat is an Outerlimits.

“That is definitely Outerlimits hull No. 1, but the boat had a different paintjob when it was new,” said Kleitz. “I think it even had Blackhawk drives to go with its MerCruiser 502 EFI engines.

“Mike built it for Bob Russell and Bob called it ‘Let’s Rock,’” he added. “We’ve come a long way since then, but it’s great that the first Outerlimits is still out there and looking for a good home.”