You are at:Home»Inspiration»Flying With Torrente

By the time we finished our first speedonthewater.com center console roundup last Thursday on the Lake of the Ozarks in Central Missouri, Jason Johnson, my fellow OffshoreOnly.com columnist and speedonthewater.com co-publisher, and I were ready for something a little more exhilarating. Don’t get me wrong—with professional test drivers Bob Teague, Grant Bruggemann and Shaun Torrente we tested some dazzling center consoles that day. But none of them delivered a pure go-fast boat experience.

For that, we turned to Torrente, who brought his vintage 30-foot Skater Powerboats catamaran repowered just a few days before with a pair of Mercury Racing 450R outboard engines mounted on his own STR X-Act brackets. Currently in the thick of defending his 2018 title with the Abu Dhabi team, the 41-year-old reigning F1 H2O tunnel-boat world champion was more than happy to take us for a late-afternoon blast in his 30-footer. 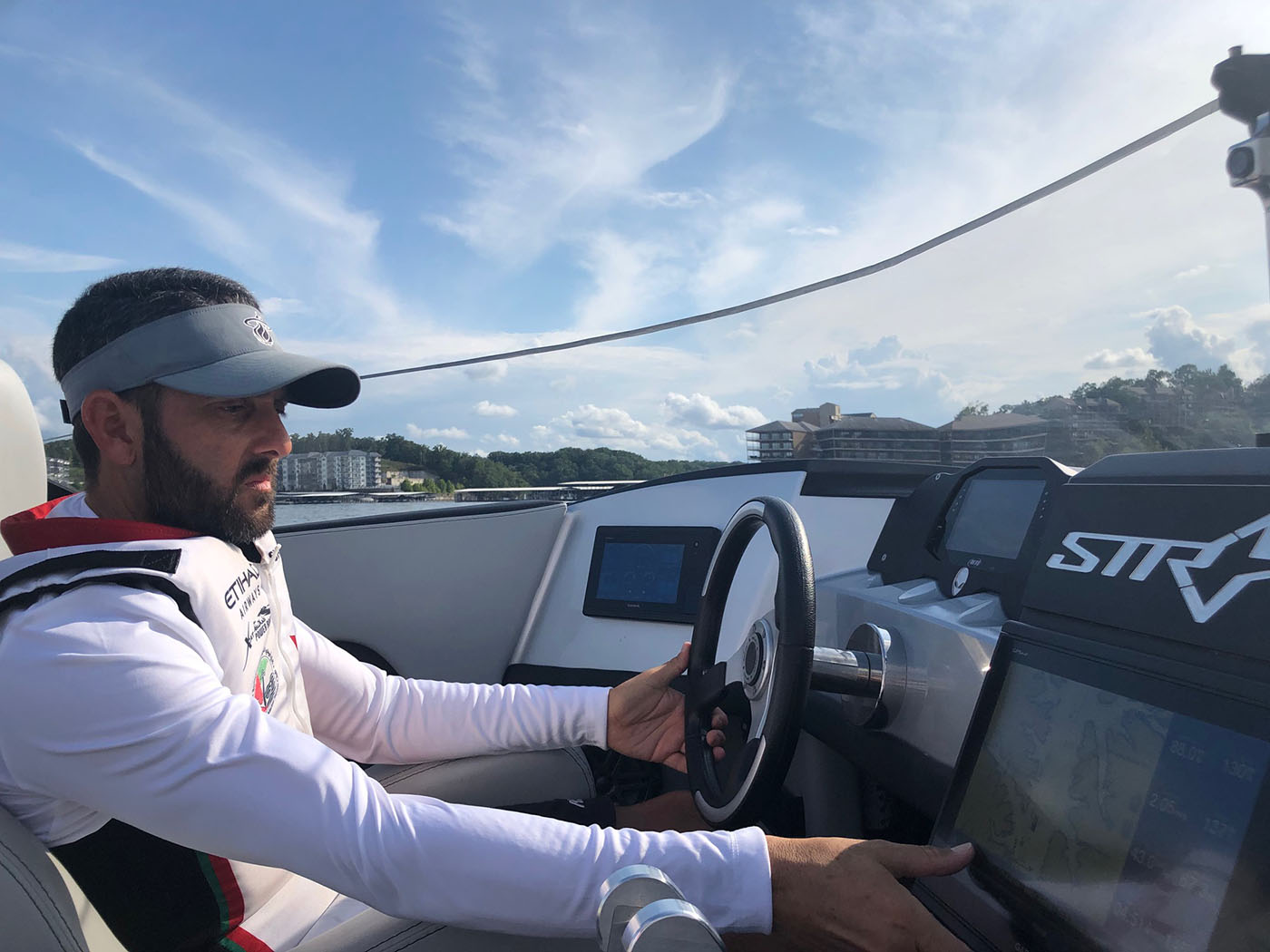 Currently overseas in advance of the next F1 H2O race with the Abu Dhabi team, Shaun Torrente treated two reporters to an unforgettable ride in his 30-foot Skater catamaran, which he repowered just a few days earlier with twin 450-hp outboard engines. Photos by Jason Johnson/Speedonthewater.com.

Johnson rode in the copilot’s bucket next to Torrente. I grabbed a seat in the back. Then the fun started.

Johnson and I have gone a lot faster on the water than the 114 mph we hit with Torrente in his boat. (For the record, Torrente said he’s already had the repowered cat to 124 mph.) Johnson saw 185 mph in a canopied, turbine engine-powered Mystic Powerboats catamaran several years back. A few years later, Johnson and I were treated to a 171-mph ride in an open-cockpit M35 catamaran from DCB Performance Boats.

But neither of those rides felt as much like flying as running with Torrente at more than 100 mph. Combine a small cat with significant outboard power, a world-class tunnel-boat and catamaran driver and slightly lumpy water and you have what was—to some degree—the ride of our lives. Torrente is a top talent in arguably (but not by much) the most competitive and professional circuit in powerboat racing.

Though the boat shot to 100-plus mph in what seemed like an eyeblink, most of the ride was docile. The Skater skimmed across the top of the one- to two-foot slop created by other boats on the water. But as we got toward the center of the waterway, we encountered some bigger stuff and launched a few times.

Shaun and Flavia Torrente enjoyed a little time together last week on the Lake of the Ozarks in their 30-footer.

With a lesser driver—meaning pretty much everyone on the planet—I’d have been afraid, maybe even asked him to slow down. After more than 25 years of fast boat rides, I’m not shy about asking drivers I feel are over their heads to either throttle back or let me off. (Shattering a fragile ego or appearing frightened is the least of my concerns, coming home to my family is my top priority.)

But Torrente had it all under control. The first roller we hit put us slightly, and I mean slightly, nose high. In the split-second between that roller and the next one, Torrente adjusted the trim and we flew perfectly level over the next three. And then we were back to a flat and glassy section of the waterway.

At one point we ran side-by-side with another 30-foot Skater of a different vintage and deck style. That boat also recently had been repowered, but with Mercury Racing 300R outboards. Torrente eventually left them in our wake, but he did chat with the two guys in the cat when we both stopped a few minutes later. They asked his name and he introduced himself.

“Oh, I think I’ve heard of you,” the driver/owner of the boat said.

A big-time Skater catamaran, Torrente took the time to chat with a couple of other Skater enthusiasts he encountered on the Lake of the Ozarks last Thursday.

Torrente and the other driver talked shopped for a few minutes before we left. He wasn’t Shaun Torrente the defending F1 H2O tunnel-boat world champion. He didn’t launch into a litany of his career achievements. He’s far too humble for that.

Johnson and I could have ridden with Torrente, who has become one of our most cherished industry friends during the years, all day, but he had other—and much better—things to do. His lovely wife, Flavia, was coming into town that evening and he had to get his Skater back to its home base (a lakefront home he and his Southwest Florida pals rented for the week) and get cleaned up in time for dinner with his bride. He dropped us off at the Camden on the Lake Resort, the host venue for Super Cat Fest and our center-console roundup.

We thanked him for the ride, and off he went.

“That was the highpoint of the day for me and probably one of the coolest boat rides I’ve ever had,” I said to Johnson. “We just went pleasure boating with freaking Shaun Torrente. I think that might have been the best boat ride of my life.”

Last week, we caught a go-fast powerboat ride with Shaun Torrente. And while it wasn’t the fastest one either of us have taken—as noted above—it may well go down as the most memorable.