You are at:Home»Power»Meeting the Chief 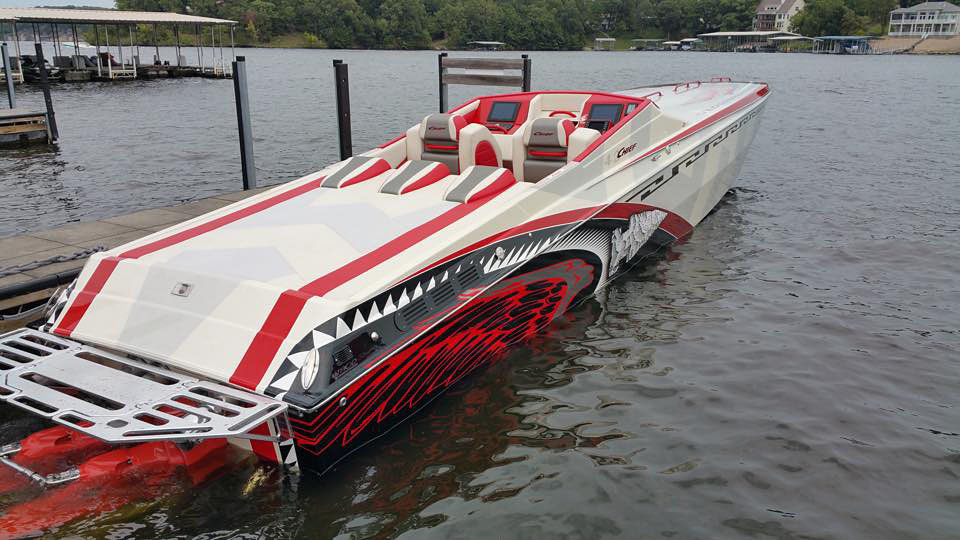 The 42 Warrior from Chief Powerboats was an attention-getter during the Lake of the Ozarks Shootout thanks to its stunning paint job from The Art of Design. (Photo: Chief Powerboats)

I was just about to sit down amongst several MTI owners and their family and friends to order some food at Coconuts Caribbean Bar & Grill in Gravois Mills, Mo., when my phone rang with an unfamiliar 219 area code on the screen. Since it was Lake of the Ozarks Shootout week, I figured I should answer it real quick.

Well I was glad I did. On the other end was Eric Dorris, a contact I hadn’t heard from in some time. I interviewed Dorris, who owns Fire Flys Performance Marine in Crown Point, Ind., in early 2014 about the 42 Warrior from Chief Powerboats he purchased (read the story) and becoming one of the company’s dealers. The Art of Design in Elkhart, Ind., had recently painted the V-bottom and he was overjoyed by the detail, depth and modern take on a classic design that Dean Loucks and the crew at TAOD provided. 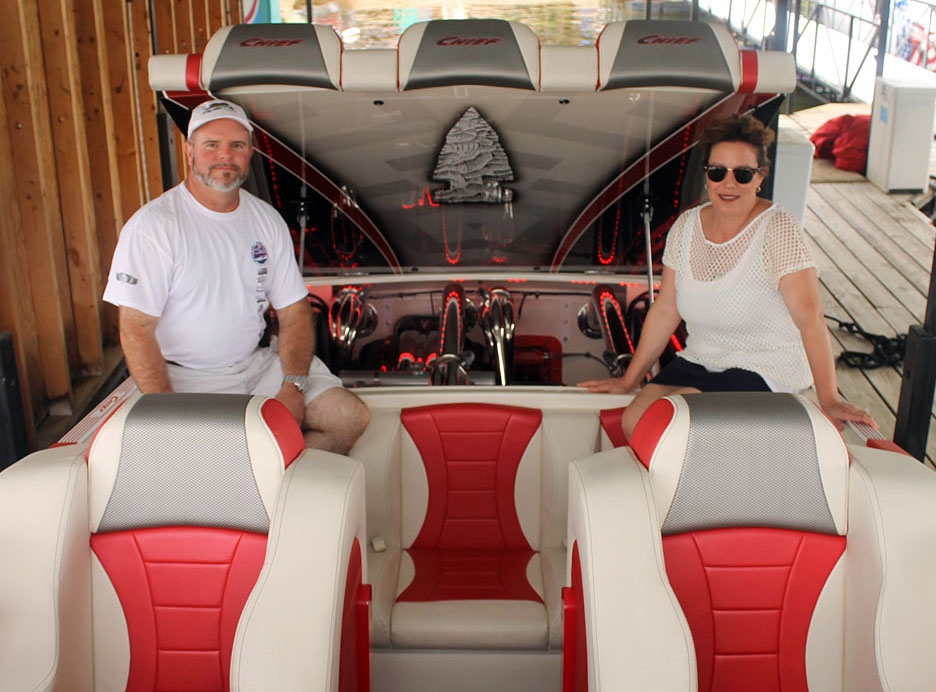 Eric Dorris and his fiancé, Ann, have spent much of their summer enjoying the 42 Warrior. (Photo: Chief Powerboats)

Dorris informed me that he was on his way into town and would have the 42 Warrior, which is powered by short-staggered Ilmor Marine 725 engines coupled with Ilmor Indy drives, on display at Dog Days for the longstanding Friday night dock party. I never made it to that party so I missed seeing the V-bottom lit up in red with its engine compartment LEDs showcasing the 725-hp motors and its underwater lights attracting the fish.

Fortunately Dorris was persistent and made sure to set aside some time to show me around the boat during Saturday’s Shootout festivities. All I can say is that it is definitely a one-of-a-kind, show-stopping piece. The rigging was lights-out, the upholstery (including the substantial sun pad that matched the paint) was top-notch and its overall appearance—from the paint and the handrails to the custom swim platform and modernized dash—was outstanding.

While the build took longer than he expected to complete, Dorris said he’s been enjoying the 42-footer throughout the summer and is likely going to take it on the Florida Powerboat Club’s Key West Poker Run from Miami to Key West, Fla., in November. His disclaimer is that he’s getting married in October so that takes precedence over anything else at the moment.

“I still can’t believe how beautiful this thing turned out,” said Dorris, who was almost at a loss for words when discussing the 42 Warrior. “Whether you like the design or not, everyone can appreciate the attention to detail that went into this boat. It really is a piece of art as much as it is a performance boat.”

Working closely with Scott and Daryl Grady—the two brothers from Indiana who have owned Chief Powerboats since 2004—Dorris, a mechanical contractor, said that he enjoyed being a part of the build process and would be happy to do it again with any interested customers.

“At the end of the day, we’re going to do everything we can to bring a completely customizable product to the customer,” said Dorris, adding that if anyone is interested in buying the new 42 Warrior or exploring the possibility of building a new boat to contact him at Fire Flys. “Our goal is for owners to be able to make the boats as unique as possible.”