For the purposes of full disclosure, Speedonthewater.com is the official media partner of the inaugural American Power Boat Association Offshore Championship Series produced by the Offshore Powerboat Association and Powerboat P1. Jason Johnson, my speedonthewater.com co-publisher, and I were honored to be asked by Azam Rangoonwala of P1 and Ed “Smitty” Smith of OPA, and we agreed to take on the formidable task of covering the before, during and after of the six-race series, which so far has delivered more than 50 boats per race and some truly fantastic action—the Supercat-class battle between the Pro Floors Racing and M-Con teams at the season-opener in Cocoa Beach, Fla., comes to mind. 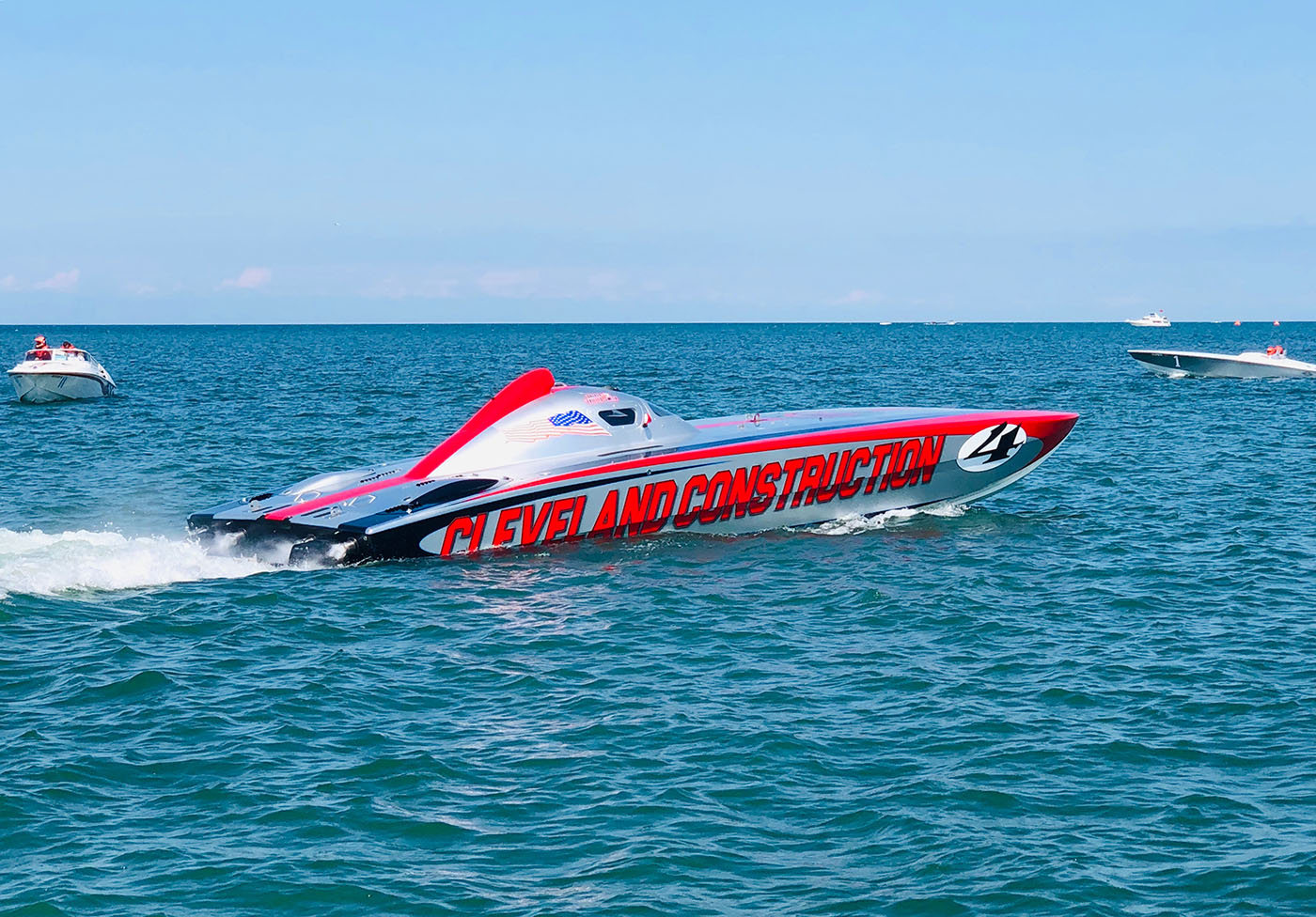 Cleveland Construction made a surprise appearance at the first event of the 2019 Race World Offshore season in Dunkirk, N.Y., last season.

Race World Offshore produced its first race of the 2019 season in Dunkirk, N.Y., last Sunday. But with an eight-boat turnout and none of those boats in the same class—they even had a poker run boat in the mix—it really wasn’t a race. It was an exhibition, a show for thousands of fans from a small town and beyond, and a decent one by most accounts.

But it wasn’t a race.

For dedicated and discerning fans of the sport, it was a non-event. But for the vast majority of people who showed up to watch eight go-fast boats run on Lake Erie, it was a show.

“I think I only heard one fan say, ‘Last year, there were more boats,’ ” said Anthony Scioli of Buffalo, N.Y.-based Elite Poker Runs LLC, who was in Dunkirk for the weekend and honored a commitment he made last year to run his center console as a safety boat. “Most people had no idea what they were watching. They thought all the boats were racing against each other.

“The City of Dunkirk, the mayor and the organizing committee rolled out the red carpet,” he continued. “The race-day crowd was awesome. When I looked in at the pier all I could see were people. The causeway was lined with people. Dunkirk is a little town kind of in the middle nowhere. They definitely built on the momentum from last year.”

Though disappointed with the race-team turnout, Larry Bleil, the head of Race World Offshore, said he was delighted with everything else about the event. And RWO has a two-year contract with the city, which means his organization will return to Dunkirk in 2020.

“We had a great show and the town loved it,” he said “There should have been more boats—I wish there were more boats and a lot of teams that said they were coming bailed out at the last minute—but this is the bottom line: We put on a great show with the boats we had. When you have a town that is so appreciative, all of the people who came out, kids from the hospital in wheel chairs, thousands of people on the beach, it’s a success.

Bleil said that he is confident that the upcoming Race World Offshore contests in Florida—Clearwater (Sept. 27-29) and Key West (Nov. 3-10)—will have stronger race-team turnouts.

Among the boats in the Dunkirk mix was Cleveland Construction, a Skater Powerboats 388 catamaran owned by Mark Small, who exited the sport a little less than a year ago. One of the original backers of Race World Offshore, Small said he was inspired to bring the 38-footer—and have (Evil) Ed Smith and Rich Quandt  run it—by a Dunkirk local who helped the team weld an exhaust pipe during the 2018 Dunkirk contest.

“He asked me why our boat wasn’t there,” said Small. “And I saw the low boat count and a lot of folks in the crowd wearing Cleveland Construction hats on Saturday. I called Ed Smith and said, ‘We have to bring the boat up. We need to do it for the fans.’

“The reality is we did it for all the right reasons,” he continued. “I don’t care about OPA and P1 or Race World—the city paid $300,000, which is a lot of money for a little town, for a race and they deserved to see a show. And the whole town came out. They came out in droves. I was happy to bring the boat out for them and the guys put on a show. I love this sport as much as anybody. I’m an advocate for it. ”

Small paused. “Who knows?” he said. “You may even see our boat competing under a sponsor in the RWO event in Key West (Fla.)”

With or without Cleveland Construction—and I hope it’s with because another boat in the Supercat-class would make a great class even more competitive—speedonthewater.com will cover the RWO races in Key West. As we will with Clearwater. And of course, we’ll be all over the final race of the APBA Offshore Championship Series in Fort Myers Beach, Fla., as well as the OPA World Championships in Englewood Beach, Fla.

Dunkirk was, at least from what I viewed on the sketchy Facebook livestream coverage, a high-speed powerboat exhibition for appreciative spectators who, for the most part, aren’t offshore racing experts, much less students of the sport’s nuances and politics. From a media perspective, the event didn’t offer much to cover. There’s no escaping that fact.

But for those in town to watch, it may have been enough.