You are at:Home»Racing»Full Stream Ahead for Lake Race 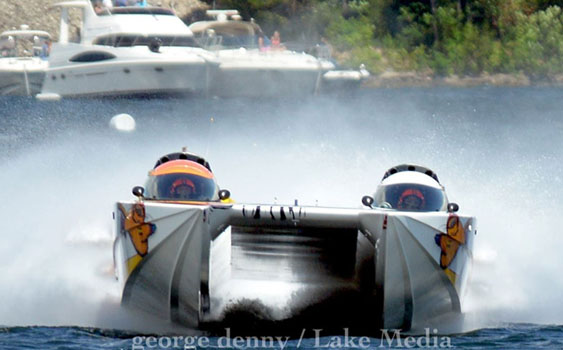 Driving the Cat Can Do Skater, Keith Holmes and Barry Glovick took home the overall victory in the Run What Your Brung class last weekend. (Photo by George Denny.)

I can’t speak for my wife and two daughters who had to listen to six hours of racing being streamed live on my laptop last weekend, but I know I enjoyed the online broadcast of the 2014 Lake Race on Missouri’s Lake of the Ozarks. And that had little to do with the actual racing on the 4.5-mile course at the Bagnell Dam end of the lake.

Don’t get me wrong, the racing wasn’t boring by any means. There was plenty of fast-paced action during the two days of competition—in fact, there were almost twice as many boats as there were at last year’s inaugural event thanks to the sanctioning efforts of the Offshore Powerboat Association (OPA)—but it was the team at KRMS Radio that impressed me most as it put together solid live coverage of the weekend for broadcast on local FOX affiliates, which was in turn streamed online for those of us outside of Missouri.

Borrowing from its experience producing the coverage of the annual Lake of the Ozarks Shootout for more than a decade, KRMS did a fine job bringing the action on and off the water to my screen. Brendan Matthews, a familiar face and voice among Shootout fans, was joined by offshore racing legend David Scott in the Bravo Shop broadcast booth, while jack-of-all-trades powerboat enthusiast Shane Sherman provided interviews and insight dockside from Beavers at the Dam. 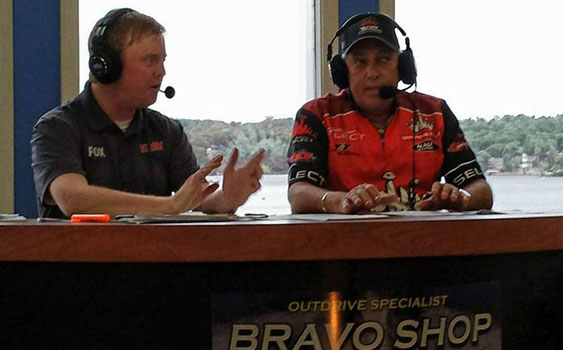 Throughout the broadcast, both Matthews and Scott gave a lot of credit to the crew from OPA for handling the race management and encouraging its teams to compete in the association’s first event west of the Mississippi River. Scott also made it clear that in all of his years racing offshore, nowhere else offered the incredible spectator viewing opportunities that Lake of the Ozarks provided.

Scott, who owns a home and a service and rigging shop—Nauti Marine—on Lake of the Ozarks, was pleased to be part of the broadcast team after serving as honorary chairperson of last year’s race. He said it was an especially fun weekend since he celebrated his birthday on Friday after the event’s street party hosted by the Bagnell Dam Strip Association.

“Overall, I think the event went very well,” said the former offshore racer who campaigned many world-champion and kilo-record-setting boats over the past two decades. “The broadcast was pretty fun even though it was hard to talk for three hours when there was only about 30 minutes of action each day.” 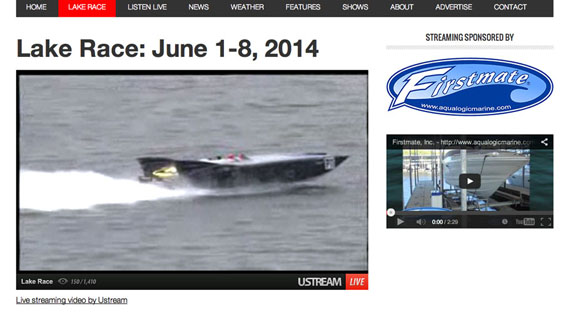 It was easy to follow the Lake Race competition via the live stream on the KRMS Radio website.

Scott also was complimentary of the event in general, especially the cash purses handed out by the organizers.

“The Lake Race is good for Lake of the Ozarks,” Scott added. “These guys do such a great job organizing the race in that the whole community comes together and helps to sponsor this thing. Between free rooms for the racers and the no-strings-attached prize money given out, there’s really nothing in offshore racing like the Lake Race.”

Besides maybe spreading the coverage up more evenly among all the teams competing on the course, the only minor criticism I have for the crew behind the scenes is that it would be nice to have a chat feature during the online broadcast so people could figure out what is going on or ask specific questions about a team, a rule, a previous race and more.

For more on Lake Race 2014, read the speedonthewater.com post-race story and check out oparacing.com for the complete results.