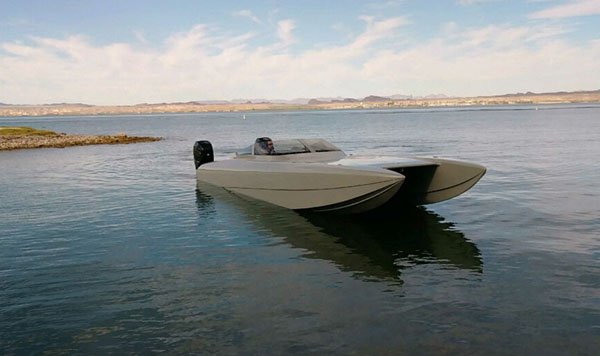 The fact that the all-new widebody 30-foot 6-inch catamaran from Predator Powerboats in Patchogue, N.Y., hit the water for the first time almost two weeks ago in Lake Havasu City, Ariz., may seem out of the ordinary being that the West Coast hot spot is some 2,000-plus miles away from New York’s famed Long Island.

But thanks to the company’s latest distributor, Sandy Dells of SDR Enterprises, the new C306WB, with its striking gray paint and wraparound windshield, was water-tested on the Colorado River-fed lake only a few weeks after being delivered—without any rigging or interior, which was being handled by two Lake Havasu-based companies: Fallon Marine and Main Stitch Upholstery.

According to Predator owner Arnaldo Alvarado, the boat, which was sold to Dells before the build even began, was designed with assistance from Doug Wright of Doug Wright Designs in Melbourne, Fla. 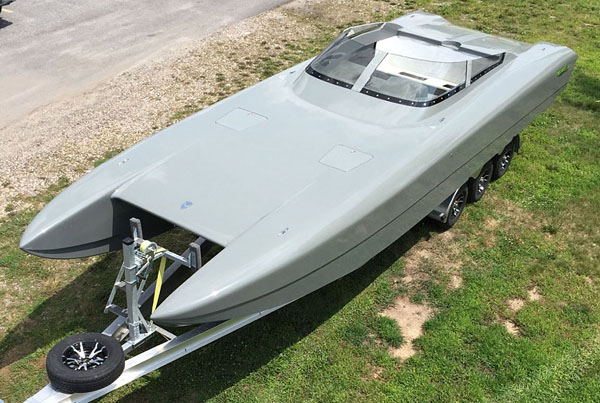 Predator’s new widebody catamaran has a 9-foot 8-inch beam and plenty of space to walk around the windshield.

“As many individuals know, Doug shares his knowledge and is one of the nicest and kindest people you’ll ever meet,” Arnaldo said. “He designed the original 30-foot cat (which was purchased from AMT Powerboats) so he knows it very well. Our goal was to make this a fast and safe 30-foot widebody cat. The changes took about two months to complete, the result of which is a new widebody mold. It was great to work with Doug to create another incredible offshore cat.”

Arnaldo said the C306WB, which is powered by twin Mercury Racing Verado 400R engines, reached 118 mph its first time out with Mercury MAX 5 33”-pitch propellers at 7150 rpm. Still without a full interior last week—only the front two seats were installed the first time out—Dells ran the boat up to 121 mph at 7150 rpm with 34”-pitch Mercury Cleaver-style propellers.

“We’re awaiting the arrival of a set of 34”-pitch MAX 5 props to complete the testing,” Arnaldo said. “Anyone who wants to run faster than 121 mph can opt for Mercury’s CNC props, although we haven’t done any tests with those. You can also order the C306WB with the less-expensive and less-powerful Mercury OptiMax 300XS engines, which we expect to be a great package.” 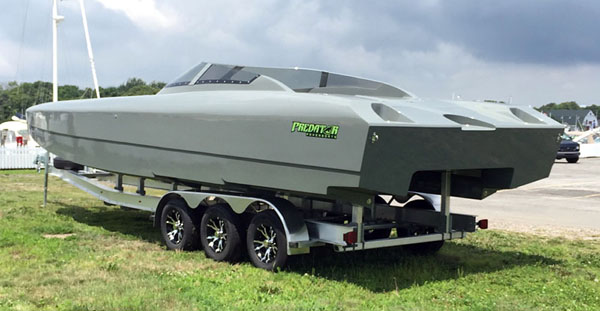 The beautiful 30-footer left the Predator facility in New York without any rigging or interior as that was handled across the country in Lake Havasu City, Ariz.

Thanks to a wide 9-foot 8-inch beam and a sizable 61-inch tunnel, the boat’s cockpit is roomy enough for a four-person rear bench rather than the three-person configuration in the non-widebody 30-footer. The C306WB also has a newly designed dash with an optional carbon-fiber in-lay to handle large-screen displays.

Arnaldo pointed out that customers who have children might opt for the cabin build. With that option, the center console-style controls are eliminated—for easy access into the carpeted cabin—and moved to a cutout in the starboard-side gunwale.

As expected, the option list for the boat includes different fuel tank sizes, electronics, graphics and more, but Predator’s goal is to keep the new C306WB simple, worry-free and stylish while providing the best performance possible on the water.