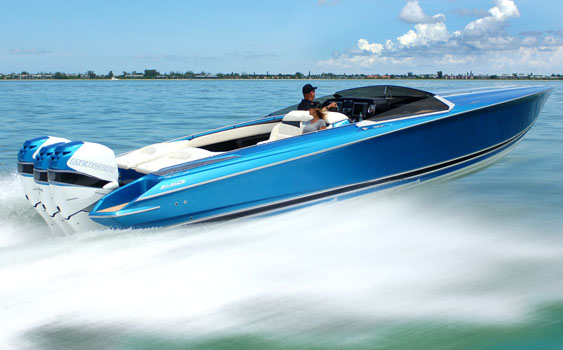 With triple Mercury Verado 300 engines, the 36-footer is quick and fast.

There’s no denying Nils Johnsen’s sense of style. The designer and co-founder of Nor-Tech Hi-Performance Boats, Johnsen has captivated customers for many years with his stunning performance boat design that he’s since rolled into the North Fort Myers, Fla., company’s lineup of popular center consoles as well as its latest series of Monte Carlo models.

The latest addition within the Monte Carlo lineage is the innovative 360 MC Flyer, which, as you can see by the images, is quite stunning. The first model, with its attractive cerulean blue paint job and corresponding Mercury 300 Verado engines integrated so sleekly into the boat design, was built for Johnsen himself. He designed it to satisfy a variety of boating lifestyles—and he seems to have done just that.

The aft-fencing seat on the opposite side of the helm seat extends and retracts electrically.

The 10-foot-wide, 36-foot-long V-bottom, which is based off Nor-Tech’s proven 340 Sport center console hull, combines the retro styling of classic runabouts from decades ago with exhilarating performance and the practicality of modern outboard power. And get this, with 900 hp behind it, the 360 MC Flyer reportedly tops out at 80 mph. Complement that with a well-appointed and spacious cockpit as well as a cabin with an enclosed head, pullout shower and wraparound sofa (an oversize berth is available), and Johnsen’s design is simply impressive.

According to Terry Sobo, Nor-Tech’s director of sales and marketing, four of the 36-footers—all with triple 300-hp outboards (twins are available)—have been sold already. As someone who was at the forefront of the center console rise, Sobo believes this boat could have similar appeal. 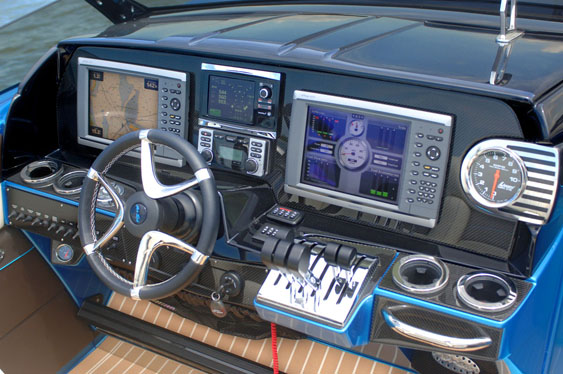 “The 36 could come with stern drives—that’s an option—but the outboards have come along so much that I think that’s why the center consoles are so popular,” Sobo said. “They’re so sleek and quiet and maintenance-free, for the most part, so if they’ve got the performance, why not? There are a lot of reasons people are going toward outboards, and the technology seems to be advancing.

“We’re proud of this design,” he added. “Think back to the old days with the Glastron Carlsons and some of the classics with that swept-back look. This boat definitely brings back some memories with a little bit of retro styling. Plus the cockpit is amazing—it swallows up a bunch of people. It gives you all the low-maintenance aspects of a center console, but it doesn’t look anything like a center console.” 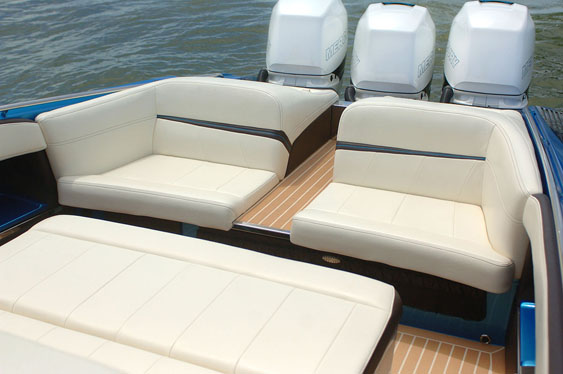 The 36-footer’s rear bench and aft-facing sun pads are split by a walk through to the transom.

Ahead of the three-person helm seat is a state-of-the-art dash protected by a wraparound windshield. Behind it is an aft-facing bench seat with storage below it that, with the push of a button, extends out to become a full-length sun lounge. A large rear bench seat lifts via electric actuators to access a sizable storage area and mechanical room. Atop the hatch is a pair of aft-facing lounges and a walkway for access to the transom for boarding and/or swimming.

One of the coolest aspects of the 360 MC Flyer has to be the transom extensions that give it a sportboat appearance rather than the flat transom look of a center console. It’s also cool to see someone like Johnsen be able to incorporate much of the creativity he’s put into various boat designs into one model—and be able to keep it stylish at that.