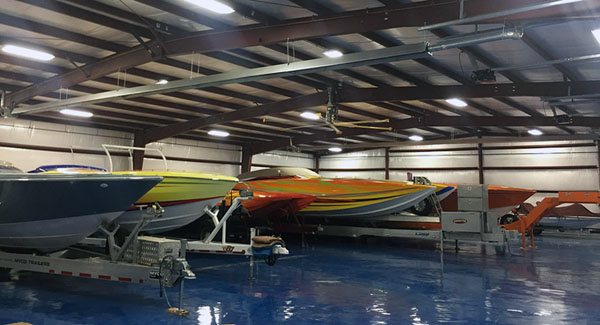 To say Justin Wagner of Waves and Wheels has been busy lately would be an understatement. Not only has his company (which he founded in 2001) continued to crank out stereo installs and complete interior updates during an expansion that more than tripled the size of its current Osage Beach, Mo., facility, but Wagner has also been pushing—and pushing hard—his new Bluave Marine Audio line of pro audio equipment engineered exclusively for the marine industry.

After introducing the business last October at the International Boatbuilders’ Exhibition and Conference (IBEX) in Tampa, Fla., Wagner and company have been hard at work lining up dealers, installing the product in their customers’ boats and fine-tuning the equipment with some of the best sound engineers around. Things have been going so well that between the offices, product storage and a demo area, the original 5,400-square-foot shop is no longer being used for fabrications, rigging and upholstery installs. All of that work is now being handled in the 12,000-square-foot shop that was completed in March.

“Justin has been telling me about his new products for at least a year, so when he sent me some speakers a while back I was eager to give them a try,” said Chris Foster of Mobile Solutions in Brentwood, Calif. “We’ve done a couple of installs so far—nothing too excessive—and we’ve been pretty impressed. I love the highs on them. I also like that Bluave offers the larger speakers and subwoofers, too.”

Foster, who also handles car stereo installations as well as some in-home audio projects, said Mobile Solutions recently completed a system upgrade on a customer’s Nordic Boats 35 Flame and the owner was pleased with the end result. He added that he expects to start using even more of the Bluave products moving forward, but that it really depends on what the customer wants.

Another dealer who has gotten to know Wagner over the years and has been utilizing the Waves and Wheels speaker pods and subwoofer enclosures regularly since stumbling across the company’s website many years ago is Nick Compton of Island Audio in Maurepas La. 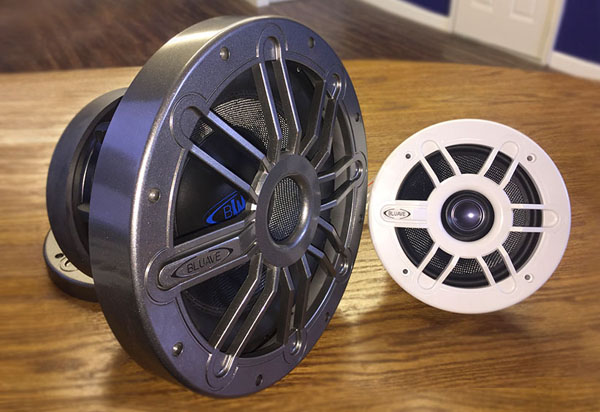 For now, the new Bluave marine-specific products include 7- and 9-inch coaxial speakers and 10- and 15-inch subwoofers.

“We haven’t put too many of the new Bluave products through the paces yet—we’ve only done one install (in a 23-foot Monterey), but everything turned out great,” Compton said. “The clarity of the speakers is unbelievable. I can’t say how many of my customers will go with them—some of our guys like what they like and it’s hard to sell them on something new when what they had before worked well for them. That said, the Bluave products sound just as good or better than most products, and price wise they are very competitive.”

While Wagner has been busy over the last six months adding dealers such as AVC Marine in Georgia and Tronix Autosports in New Jersey, the custom work by the team at Waves and Wheels hasn’t stopped—especially when it comes to Bluave installations and complete interior updates that can be done with more frequency thanks to the new addition to the shop.

A repeat customer of Waves and Wheels, Charlie Galli of St. Louis was excited to get some of the first Bluave speakers installed in his recently purchased SeaRay 450 Sundancer. As part of the updated audio system, which included Bluave speakers, Focal subwoofers and a pair of Waves and Wheels quad speaker pods, his cruiser received a new Fusion head unit that allows him to manage the audio in zones, giving him control of the volume in the cockpit separate from the speakers facing aft.

“Waves and Wheels did the entertainment system in my 410 Sundancer and there was no question I was going to use them again for my next boat,” said Galli, who does most of his boating with his wife, Corrie, and their two kids on Missouri’s Lake of the Ozarks. “We were happy with the previous installation, which was probably six or seven years ago now, but more important, we were impressed with the service that went along with it. If we ever had an issue, they’d come address it immediately. Every dealing we’ve had with Justin and his team has been top notch, and of course the system in the new boat amazing.

“I’m not sure how to describe (the sound of the Bluave speakers), I just know it sounds awesome,” he continued. “I mean it’s crystal clear—and I know it sounds better than my old one. Of course that one was seven years older, but I don’t think it ever sounded as good as this one.”

For Wagner, who said he is always available to answer questions from customers, dealers, OEMs and more, the compliments keep coming in and he continues to take them in stride while working to improve his products, procedures and overall perception of the powerboat industry.