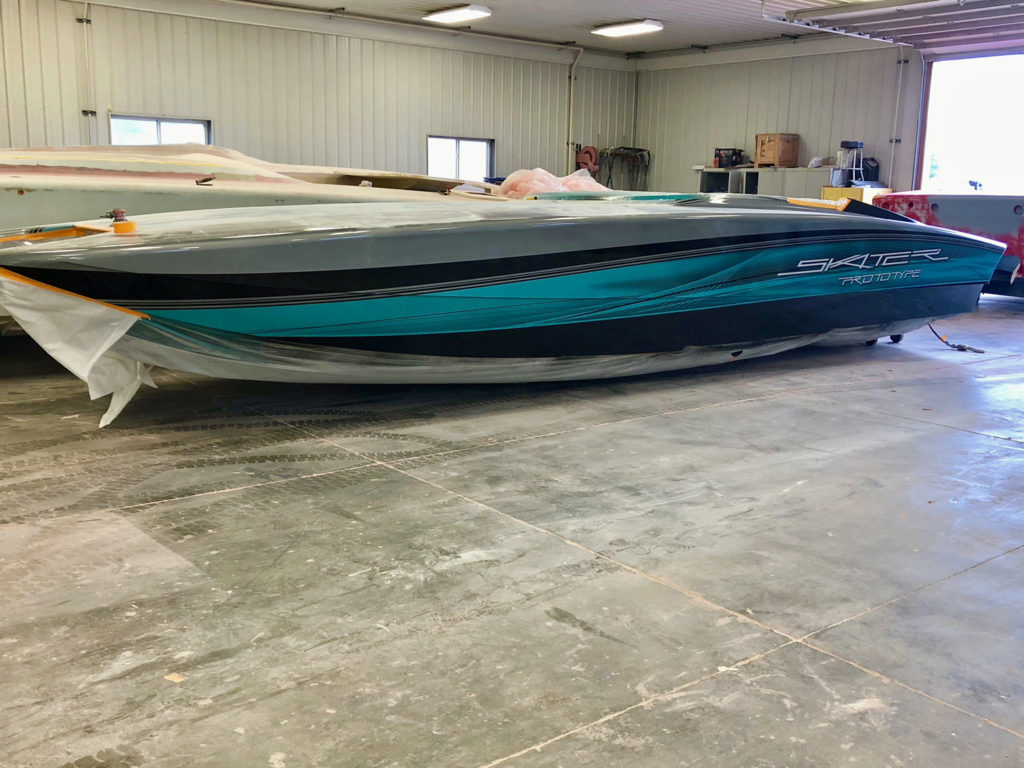 By the end of the 1990s, high-performance powerboat builders were pretty much done with teal in their exterior and interior graphics packages. But in the four to five years prior, they couldn’t get enough of it. From gauge bezels to hullside stripes, teal was everywhere.

And then it was nowhere. Go-fast boat builders mercifully retired it.

As overused colors go, I didn’t mind teal. True, it became ubiquitous but it at least it wasn’t gaudy. Teal was, for this longtime industry observer, inoffensive and easy on the eyes, especially given some of the over-the-top motifs such as murals, themes and hideous tribal flames that followed.

But then, my tastes in colors and color schemes run conservative. To each his or her own, right?

So I have to admit that the predominant teal—or least a slightly darker exotic derivation of it—in the color scheme of a 30-foot Skater catamaran currently being repainted at Boat Customs in Caledonia, Mich., has me stoked. Boat Customs talented proprietor Chris Mills is handling the application. Thomas Kulesia, II, of No. Coast Design in Elkhart, Ind., created the design, which also includes black, gray and the Skater name in white.

You’ve probably read about this project on speedonthwater.com, but for those who haven’t, here’s the short version: The boat’s owner, Dale Rayzor of Discovery Bay, Calif., is repowering his formerly Sterling Performance engines-powered 2005 Skater 30 Prototype catamaran with Mercury Racing Verado 400R outboard engines. In concert with the power swap, Rayzor decided the boat needed a whole new look, so he turned to Mills and Kulesia.

Pardon the pun, but Rayzor has a sharp eye. The original metallic-silver-and-red paint job, applied by Chris Dilling of Grafik EFX on his then-new 30-footer was as gorgeous as it was unusual at the time. That paint job was bold, as bold as the new one is shaping up to be. Yes, Mill and Kulesia created it. But Rayzor had to approve it and, once again, the guy has proven he has great taste.

Does this mean teal is coming back with vengeance and that eventually, you’ll be unable to escape it? Of course not. Rayzor’s Skater is a custom boat with custom paint based on a custom design. Boat buyers in the custom realm look for distinction rather than sameness—and they’re willing to pay dearly for it—and the most effective way to accomplish that is through paintwork. So while they’re could be derivations and maybe even outright imitations, they’ll likely be few and far between.

But at least with Rayzor’s Skater, teal returns in glorious and—thanks to its disappearance from the go-fast boating world almost 20 years—refreshing fashion.