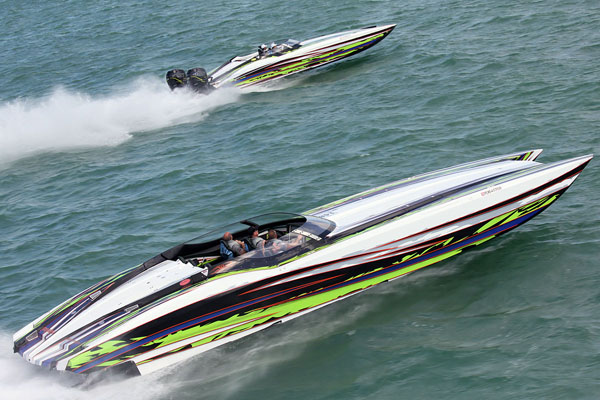 It is kind of funny, but if you asked me this summer, last month, yesterday, tomorrow or next week what my favorite boat I came across this year was, I’d likely rattle off 10 to 15 boats in 60 seconds and the list would probably be different each time.

But that’s because I either wrote about or climbed aboard in person—between the Miami International Boat Show, Desert Storm Poker Run, 1000 Islands Charity Poker Run, Big Cat Poker Run, Lake of the Ozarks Shootout and Key West Poker Run—dozens of jaw-dropping boats. In fact, I’d liken this to one of the best years I can remember in terms of production variety, new model introductions and outstanding projects.

The boats I’ve been able to check out from the likes of Cigarette, DCB, Deep Impact, Fountain, MTI, Mystic, Nor-Tech, Outerlimits, Skater, Statement, Sunsation and more were pretty amazing, to say the least. But let’s get back to the question about my favorite boat—never mind I can’t answer that. Because if I had an open checkbook and could pick any boat I came across this year, I’d have to say I’d want two and I’d want them to match, which seems to be the trend (depending on your pay grade).

Spooled Up, Craig Hargreaves’ 52-foot MTI, drew plenty of attention at the Miami International Boat Show in February and was joined by its sister ship, a DCB M44 Widebody (below), seven months later. Photo by Pete Boden

Let’s start with Hargreaves, who scored two exceptional catamarans—a 52-foot MTI in February and a 44-foot DCB model (Spooled Up II) in September, both of which were painted in the nearly identical black, orange and yellow design by the talented team at Visual Imagination in Peculiar, Mo., and both of which were powered by twin Mercury Racing 1550 engines. Matching boats might as well have matching engines, right? Of course, Hargreaves’ custom SportChassis and F650 tow rigs are wrapped to match the boats. 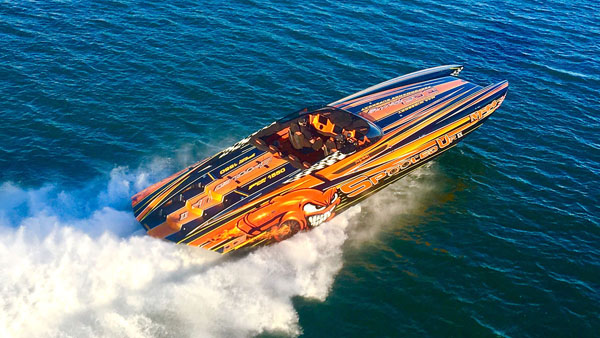 Spooled Up II made its debut at the DCB Performance Boats Regatta in Lake Havasu City, Ariz. Photo by Todd Taylor/Todd Taylor Images

Then there were O’Loughlin’s matching MTIs—Vengeful and Lil Vengeful. The 48-footer powered by Mercury Racing 1350/1550 engines made its debut next to Hargreaves’ 52-footer in the MTI display at the Miami International Boat Show in February, and the “mini me” 340X catamaran with twin Mercury Racing Verado 400R engines was delivered just in time for last month’s Key West Poker Run. I got an up-close look at both boats during a photo shoot for the Speed On The Water 2017 Year In Review coffee-table-style magazine coming out next month (you can order it here), and they are works of art.

I’ve got a full feature on O’Loughlin’s MTIs in place for the Speed On The Water Nov./Dec. 2017 digital magazine that is going to be live after the holidays.

So the ultimate question is, which matching set of boats would I like, the Vengeful or Spooled Up combination? Neither. I’m going to go with another one of my favorites, although its complimentary boat was delivered two years prior—Lickity Split’s Toon. Yes, “Toon” as in pontoon. But not just any pontoon. 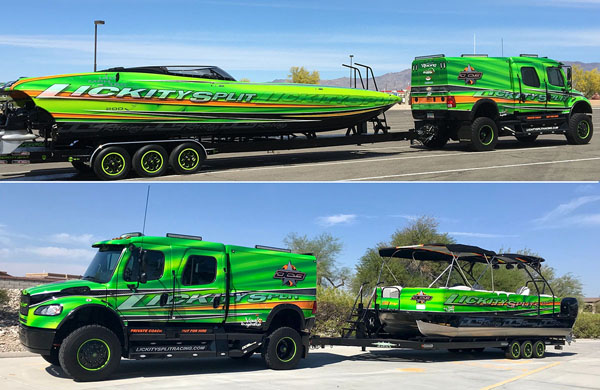 This is a 31-foot PlayCraft Boats model powered by a pair of Verado 400R engines and painted by Visual Imagination to match Lickity Split, the bright green DCB M35 Widebody powered by twin Mercury Racing 1350 engines that is as eye-catching as boats come. The same could be said for the Visual Imaginations-painted SportChassis that can often be seen towing either boat behind it around Lake Havasu City, Ariz.

Maybe it’s the practical side of me that thinks I don’t need two catamarans, but instead one screaming-fast cat and a feature-filled party platform. Heck, what am I talking about? There’s nothing practical about JP O’Donoghue’s Lickity Split or Lickity Split’s Toon, which is why they’re so damn cool, right?