You are at:Home»Awesome»A Star Is Reborn

Here is proof positive that age is just a number: Reggie Fountain, Jr., the man who built Fountain Powerboats in Washington, N.C., the once the dominant force in the high-performance powerboat industry, will be 78 years old in April. And while you won’t find him running offshore raceboats solo anymore—as was his custom back in the 1980s and 1990s—this true Southern gentleman is as mentally sharp, ambitious, charming and flat-out entertaining as he ever was.

Now employed by the company he founded, Fountain is leading the outfit’s V-bottom kilometer speed-record attempt project. Reportedly a longtime admirer of the man, Iconic Marine Group—the parent company of the Fountain, Donzi and Baja brands—owner Fred Ross knew that no Fountain record attempt would be close to complete without Reggie Fountain Jr., involved.

“I’m delighted to be back,” Fountain said in a brief telephone interview. “I want to help bring excitement back to all the Fountain boats, from sportboats to center consoles.”

And that is exactly what Fountain’s involvement in the kilo-record effort (which is planned for Feb. 2-4 but could change at any moment with the weather or a delay in finishing and testing the company’s purpose-built 40-footer that will be used for the attempt to top 180 mph) is designed to do. Bringing back excitement to the Fountain brand is a solid goal. And what better way to do it than with a new kilo record on the Pamlico River behind the Fountain plant? 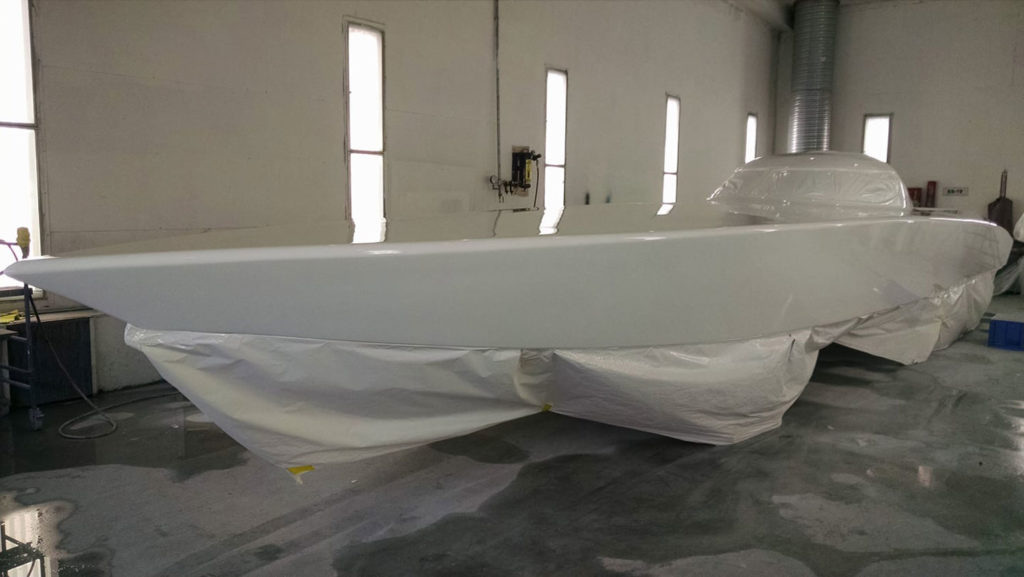 The founder of Fountain Powerboats has overseen all aspects of the company’s new kilo-run boat.

To that end, Fountain is putting the band back together, as only he could. Longtime Fountain man Ben Robertson, Jr., will run the boat. As he did for Fountain’s last kilo boat, Mike D’Anniballe of Sterling Performance built the new V-bottom’s 1,900-hp turbocharged engines. Even longtime Fountain friend Peter Hledin of Skater Powerboats has consulted on the project.

But Fountain’s involvement in the project is even bigger than all of that.

Don’t take my word for it: Talk to any high-performance powerboat builder still in business after the recession of 2008 and you’ll hear how important Fountain’s larger-than-life persona was when the industry was thriving and how—despite the permanent wholesale changes in the go-fast boat market since the recession—missed it still is.

In fact, you could make the case that his involvement is at least as important as Fountain Powerboats actually setting a new kilometer speed record. When I suggested to Reggie Fountain, Jr., during our interview, that he had once been an active hero in the performance-boating world and now he was a semi-retired legend, he chuckled and profusely thanked me for the compliment.

“Well, I guess we still need heroes in this industry,” Fountain said.

We do indeed, Mr. Fountain. Welcome back.