You are at:Home»Awesome»Cleveland Construction Out For Key West

Last Sunday morning, Mark Small, the owner of the Superboat-class Cleveland Construction team, officially “withdrew his application to participate” in the Super Boat International National Championships in Clearwater, Fla. At issue was SBI’s refusal to crane in a pair of his own non-medical safety boats equipped with fire suppression, de-watering pump, air-bag floatation and environmental containment systems that he had rented to the Fast Response Marine Towing and Salvage crew.

According to Small, SBI head John Carbonell told him, “We have it covered.”

Small disagreed. The rest is history. 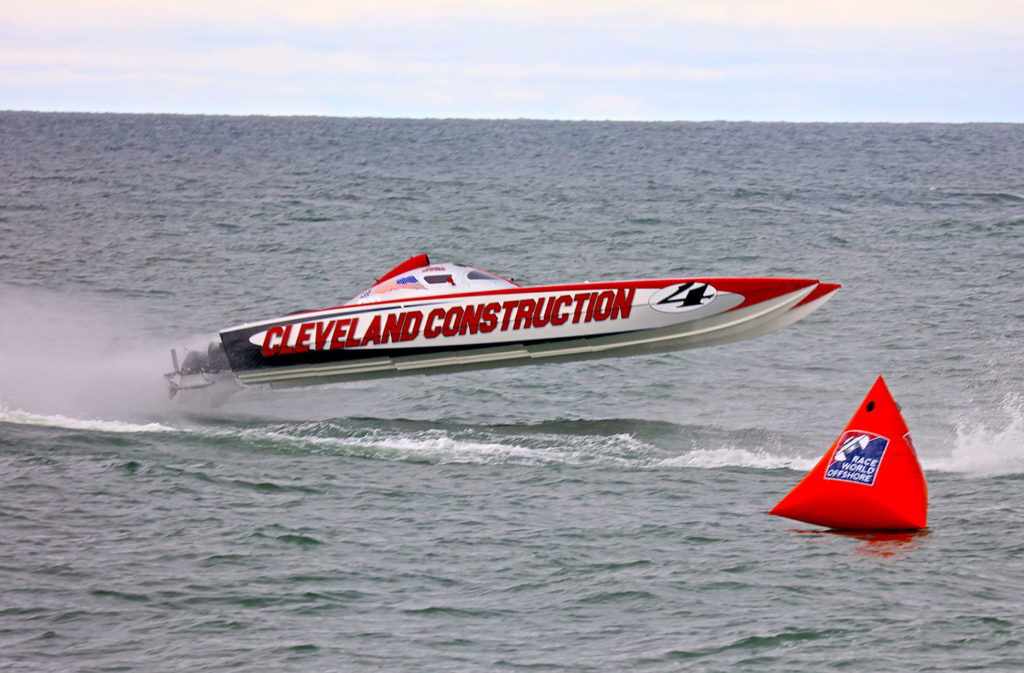 The show will go on at the SBI Worlds in Key West—but without the Cleveland Construction team. Photo by Pete Boden/Shoot 2 Thrill Pix.

And so, too, are the Cleveland Construction team’s plans to compete in the SBI Offshore World Championships Nov. 5-11 in Key West, Fla. The team likely will compete, however, at the Offshore Powerboat Association World Championships the following weekend in Englewood Beach, Fla.

“We are not going to Key West,” said Small. “We will not compete in another SBI event. I probably spent $10,000 bringing equipment to Clearwater—we wanted to race.

“I went back to my team and explained the risks and the rewards,” he continued. “Racers wish to race—they put risk secondary. But I am in a business where I calculate risk and reward every day. To be fair, I think the SBI safety crew did a decent job at the last race. I made the decision because I didn’t think they (SBI leadership) cared about my assets in the water.”

SBI’s John Carbonell offered a different version of the situation.

“Fast Response had leased a boat from Cleveland Construction to serve as the tow boat during the Clearwater National Championship Race,” he said. “However, on Saturday, Cleveland Construction demanded that they also be allowed to launch a private boat to be used for their personal service on the course. This private boat was not part of the race event and was not covered under the race contracts or insurance policies covering the event.

“While Cleveland Construction could have launched their boat at a private facility and kept it within the spectator area as required of every other race team, they chose instead to pull the tow boat out of the race at the last minute and remove their team from the competition,” he continued. “SBIP was able to make other tow boat arrangements and there was no impact on any of the races or race teams.”

To say that a major conflict between Small and SBI leadership has been brewing is an epic understatement. Citing safety concerns regarding the organization’s replacement of its safety crew leader and several members of its team, Small and several other Superboat-class team owners opted out of the SBI season-opener in Cocoa Beach, Fla.

After backing the first Race World Offshore event in Mentor, Ohio (formerly an SBI venue) in July, the Cleveland Construction outfit headed for SBI’s second event of the year in Michigan City, Ind., where the boat rolled and sustained significant damage. The team worked hard to get the boat back on the water for the second and final RWO event of the year in Dunkirk, N.Y., but was dogged by mechanical issues.

In short, it’s been a very rough—and very brief—season for Cleveland Construction.

But the rising tension between Small and SBI’s leaders began long before the season started, as he has been a leading proponent of RWO since it was formed—albeit with multiple fits and starts—by Key West’s Larry Bleil last year. Small also is a strong backer of and participant in the Supercat Racing organization, a group of Superboat and Super Cat (the Offshore Powerboat Association name for the class) owners that has agreed to run its own internal schedule of events and championship points system—across multiple racing organizations—next season.

The real loss, at least as far as Small pulling the Cleveland Construction team from Key West, is for the fans. And between the three-race SBI season and the two-race RWO season, they’ve already had to deal with what has to be one of the weirdest and most disappointing years in offshore racing history. (To be fair to OPA, the organization has had its usual solid showing this season, though to be equally the organization presently does not attract big Super Cat fleets.)

The show will go on without Cleveland Construction in Key West and likely will be a good one. Still, the loss of a key player in the season’s premiere event never is—and never will be—good news.