You are at:Home»Awesome»Going to Sport Catamaran Heaven

As its Verado 400R outboard engines will power all of the cats, Mercury Racing will have a product applications manager on site for the event.

Generally speaking, the annual late-August Super Cat Fest event based out of the Camden On The Lake Resort in Lake Ozark, Mo., showcases the biggest and baddest custom high-performance catamarans on the planet. Organizer Alvin Heathman has created a sensational happening that consistently attracts the best hardware on the planet from the likes of DCB Performance Boats, Marine Technology, Inc., Mystic Powerboats and Skater Powerboats. The ninth annual event Aug. 23-25 will be no exception. 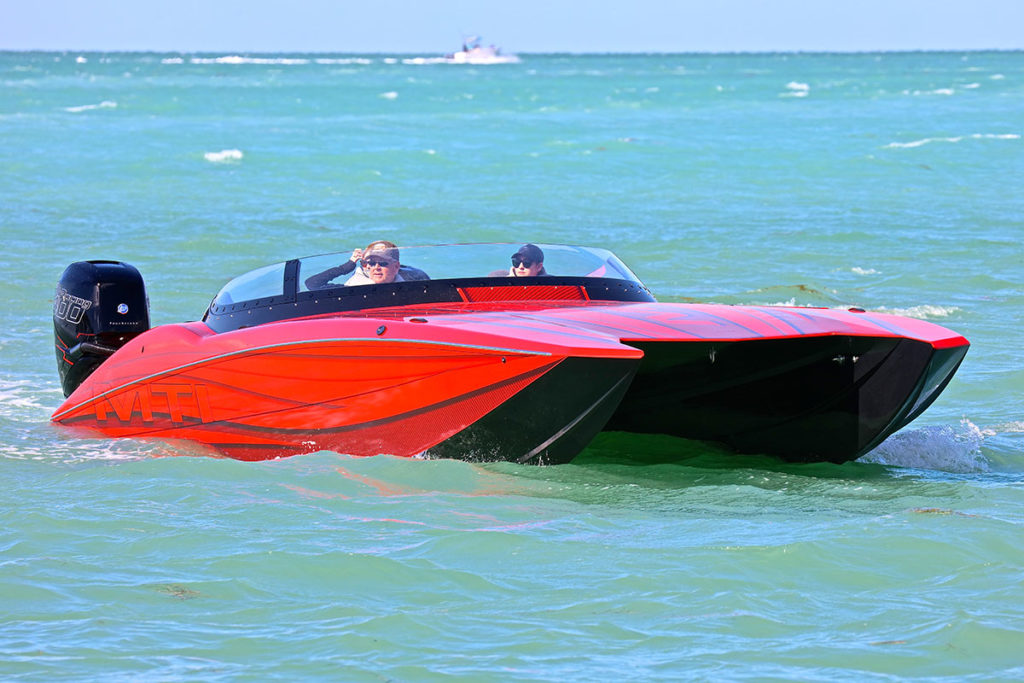 Randy Scism of MTI has committed to bring a 340X to the first speedonthewater.com sport catamaran roundup in August. Photos by Pete Boden/Shoot 2 Thrill Pix.

But outboard engine-powered sport catamarans from 28 to 36 feet have been few and far between at Super Cat Fest. That’s no fault of the organizer as the sport cat market only has exploded, thanks in large part to the introduction of the Mercury Racing Verado 400R outboard, in the past few years.

That will change this year with inaugural Speedonthewater.com/Mercury Racing Verado 400R Sport Catamaran Roundup based out of the Camden On The Lake Resort in Lake Ozarks, Mo., on Thursday, Aug. 23, the day many of the big cats also will begin rolling into town for Super Cat Fest. While the roundup officially is a speedonthewater.com event, at least by proxy it will become an early part of the amazing show Heathman has created.

Of course, we’ll record top speeds for each entry—all powered by twin stock Mercury Racing Verado 400R outboards—and we already have commitments from DCB, Mystic, Pilini, Skater and Wright Performance Powerboats. But while we can’t stop readers from fixating on that metric, this roundup will not be a top-speed contest. (Top speed is far from everything.) We’ll also look at performance measures such as time to plane, standing start and midrange acceleration, handling and stability. 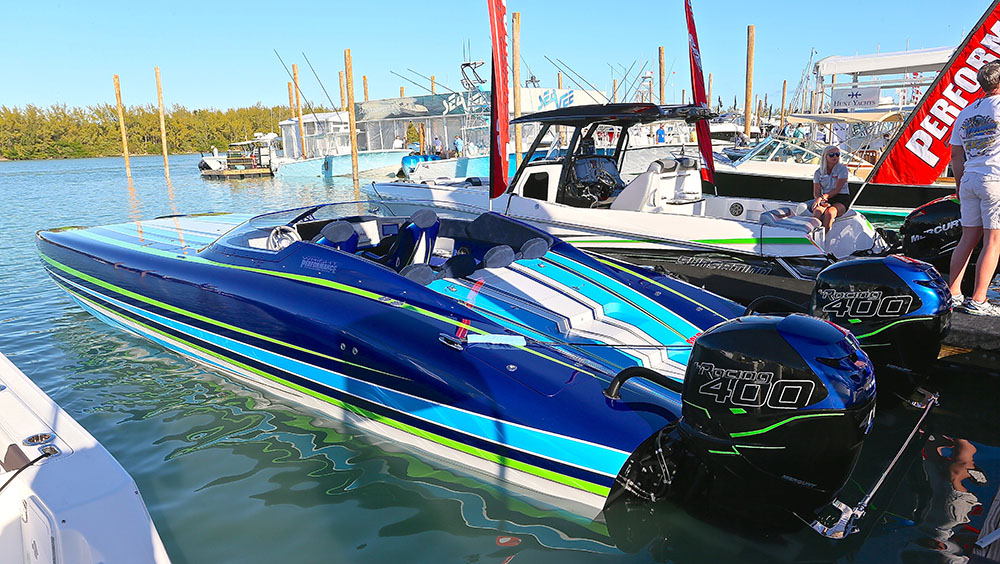 Located on the shore of the Lake of the Ozarks, Performance Boat Center will have a Wright Performance 360 cat in the mix.

Our goal isn’t to select a “winner” based on all those criteria and more. It’s simply to present side-by-side comparisons—including manufacturer’s suggested retail price—of today’s hottest sport cats, all run by the same test teams on the same day on the same waterway. Each team will run each boat and gather its own data.

All of the results will be published in the September/October issue of Speed On The Water digital magazine.

Pete Boden, our chief photographer, will capture the action, and not just for our digital magazine. We’ll be using images from the Thursday morning photo shoot for our 2018 Year In Review print magazine.

Most important: We’ll also have a professional safety crew on hand during our time on the water. Outboard-powered sport catamarans don’t post the gaudy speeds of their larger inboard engine/stern-drive counterparts, but they’re more than fast enough to warrant taking all precautions.

The boats we test will be coming to and from the Camden On The Lake docks for most of the day, which means anyone interested can come down and enjoy the show. Come Friday, the biggest and baddest cats on the planet will take their place and Super Cat Fest will begin in earnest.

So if you want to see most of today’s hottest sport cats in one place, here’s your chance—the first such opportunity since the sport cat market caught fire a few years. We hope to see you there. We’ll be busy, for sure, but we always have time to say hello.