You are at:Home»Awesome»Handicapping The SBI Key West Worlds

About midway through the Superboat Vee-class battle during the Super Boat International National Championships in Clearwater, Fla., earlier this month, I switched off the Livestream figuring the new Marker 17 Marine team of rookie throttleman Vinnie Diorio and veteran competitor/owner/driver Brian Forehand had victory in hand. I had a baseball game to get to, the last one of the San Francisco Giants miserable season, which they lost 15-0 to the Los Angeles Dodgers, and fellow offshoreonly.com columnist/speedonthewater.com co-publisher Jason Johnson had it covered.

Not so, I later learned. Leading from the start, Diorio and Forehand developed an engine problem in their Outerlimits SV 29 raceboat near the end of the contest. Never to be counted out, defending world champions Brit Lilly and Ron Umlandt in LSB Sportboats/Hurricane of Awesomeness took first place and went on to claim the national championship.

I’m going to dispense with the “To finish first, first you must finish” cliché and say yes, OK, of course keeping your vehicle running plays a huge role in all motorsports. But I really thought Diorio and Forehand would take the checkered flag, which goes to show you—if nothing else—the folly of trying to pick the winners in an offshore race.

Now, multiply that task times three with races Wednesday, Friday and Saturday, as well as all the different points, lap times/speeds and laps finished scenarios you have for the SBI Offshore World Championships next month in Key West, Fla, and the handicapping job gets really silly.

Of course, that’s never stopped me before—I’m always up for a little public humiliation. So here are my picks for the 2018 SBI Worlds. 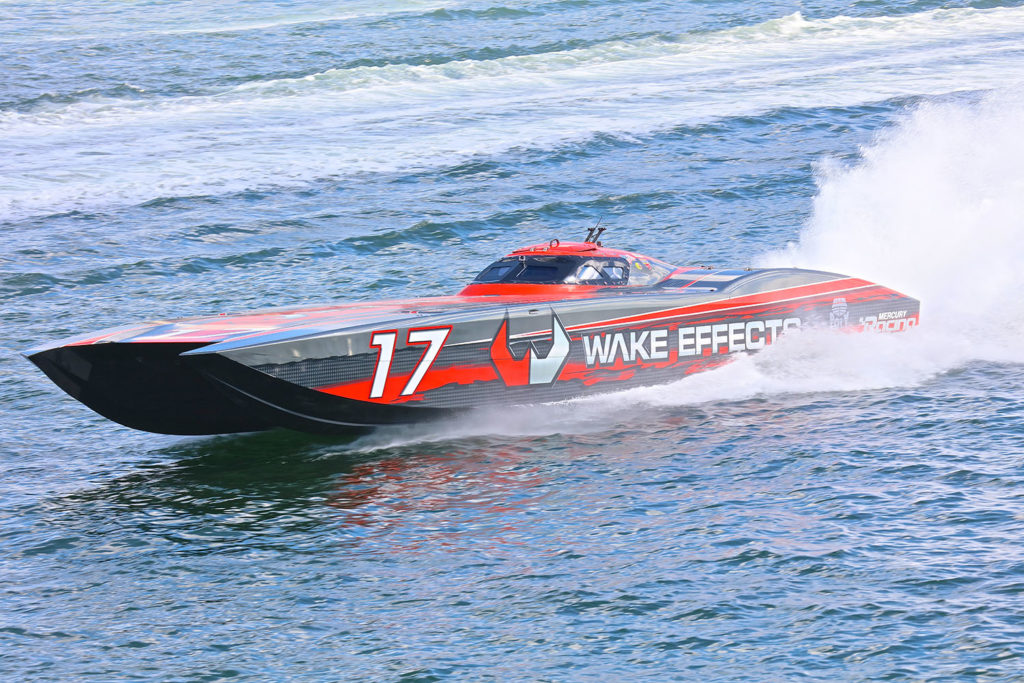 The Wake Effects team of Rusty Rahm will be the Superboat Unlimited-class team to be in Key West. Photos by Pete Boden/Shoot 2 Thrill Pix.

With Miss GEICO out, Randy Scism and Bob Bull not coming back in CMS despite all the rumors and two Dubai-based Victory boats dramatically underpowered, driver Rusty Rahm and throttleman and Jeff Harris should run away with the title in the 48-foot Wake Effects MTI. That’s not to say they couldn’t best the Miss GEICO or CMS teams in Key West for the world title—they did it before in 2016—but given the likely competition this year’s world title will be all theirs to win or lose. Said Rahm, “I think dfYoung and CT Marine will run strong, and there is always the unknown with the new Huski Chocolate MTI. But will they show and, if so, how fast are they?” So sure, Wake Effects could always break. But the way I see it, they’d have to break early in all three races for any other team to have a chance. 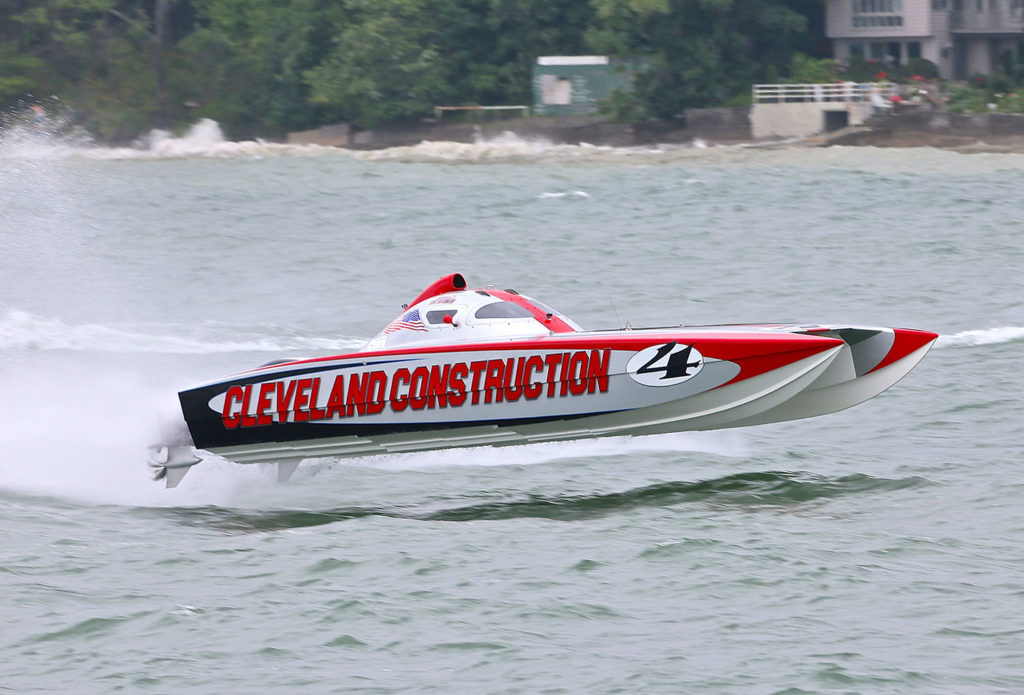 No, I’m not kidding so pull your jaws off the floor. Veteran throttleman Grant Bruggemann won a world championship in the class in 2014 with driver/team owner Chuck Broaddus in the 40-foot Broadco MTI catamaran, but he’s no stranger to the Skater Powerboats 388 cat that driver that Pro Floors Racing owner Wayne Valder has rented for Key West from Cleveland Construction team owner Mark Small. (Bruggemann, as most fans know, was the Cleveland Construction team’s throttleman this season and the throttleman for the STIHL team, which also ran 38-foot Skaters, for several years.) Like Bruggemann, Valder is an aggressive offshore racing veteran and champion who consistently ran fast all season with throttleman Chris Hanley in Valder’s 39-foot MTI. Together, the former Aussie and current Kiwi will give Performance Boat Center and WHM Motorsports—likely the odds-on favorites for most reasonably sane observers—all they can handle. And more. 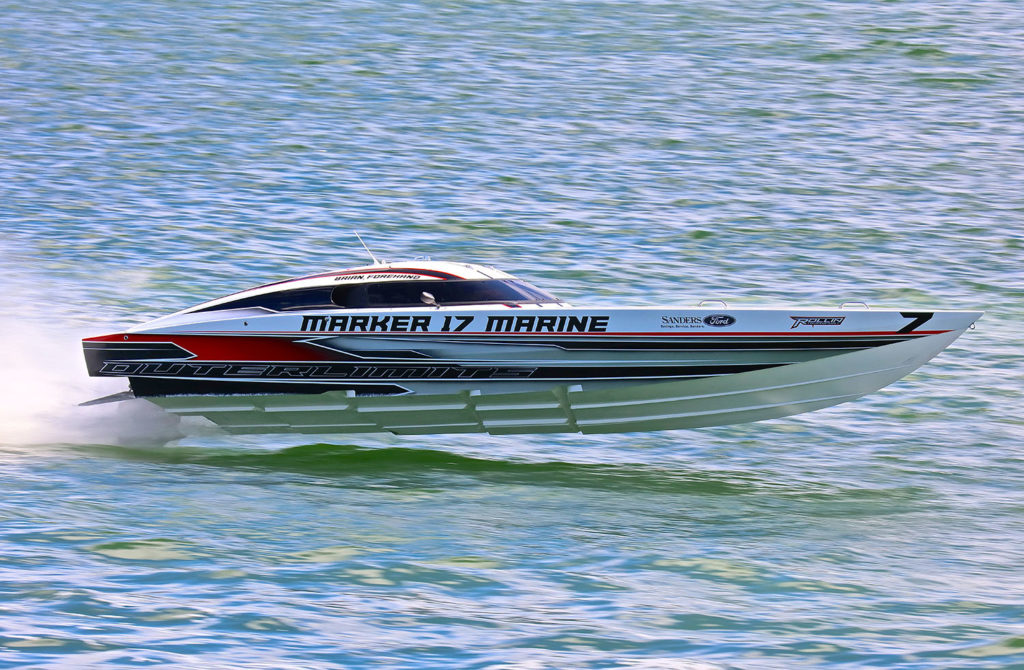 Combine an aggressive cockpit duo with a super-fast Outerlimits SV 29 and you have the makings of the 2018 Superboat Vee-Class World Champion in Marker 17 Marine.

As popular as they are with their fellow competitors and offshore racing fans, and as much as I’d like to see Brit Lilly and Ron Umlandt three-peat as world champions in LSB/Hurricane of Awesomeness, I don’t see them beating the Marker 17 Marine duo of Brian Forehand and Vinnie Diorio in a three-race format. (Great, now the entire state of Maryland is pissed off at me.) No question, Marker 17 Marine’s 29-footer is crazy-fast but it’s the ferocity of Diorio and Forehand in the cockpit that makes them my pick to take the title. “Brian is crazy the way wheels it,” said Diorio. “I never get yelled at for staying in the throttle. I get yelled at for pulling out of the throttle.” That isn’t to say Lilly and Umlandt don’t want it just as badly or won’t push just as hard. But winning SBI Key West titles in a row is a daunting task—one that hasn’t been accomplished in the Superboat Vee class. Given all that, Marker 17 Marine is my pick. Hate away. 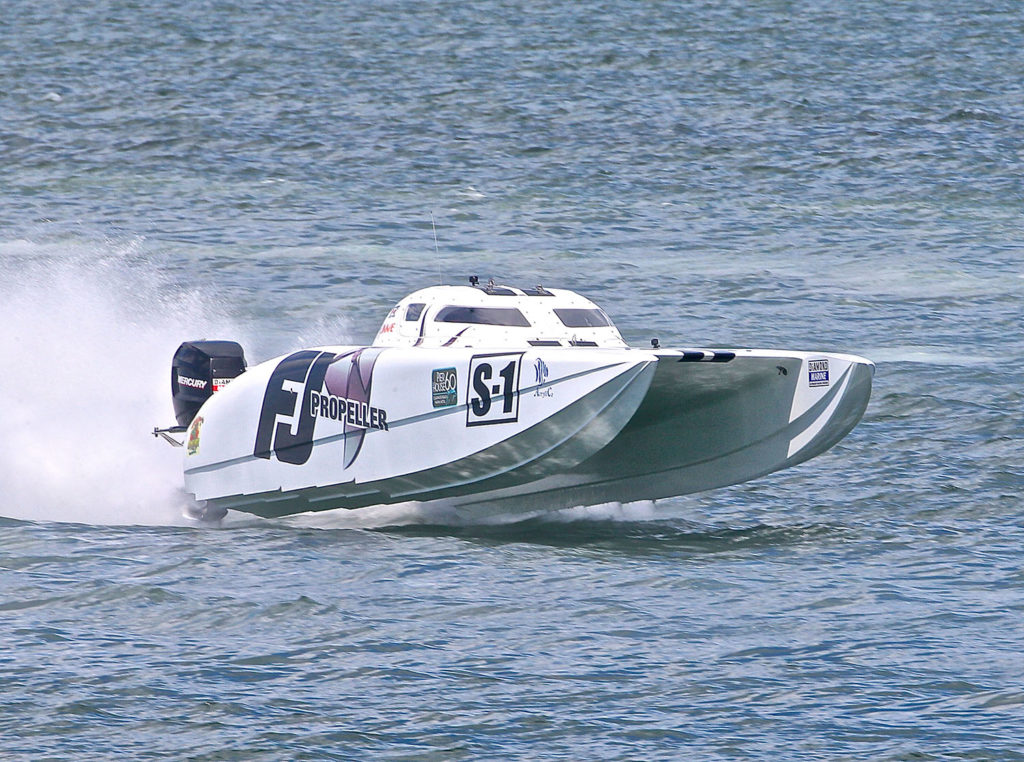 As in most seasons, it’s foolish to bet against FJ Propeller taking another Superboat Stock-class world title in Key West this year.

Last year, Stock-class throttling legend Gary Ballough and driver Jimmie Harrison—of Frank & Jimmie’s Propeller fame—lost to the super-fast, father-and-son Scafidi duo in Shadow Pirate. This season, they won two out of three races on the SBI schedule (though Ballough stepped out of the cockpit in Clearwater to run a Victory team Superboat Unlimited-class catamaran) and one of two races on the Race World Offshore schedule. The Missouri-based CR Racing and Team Allen Lawncare and Landscape teams have made amazing progress this year and have shown more than a few flashes of brilliance, but taking down FJ Propeller in the three-race Key West format is a tall order. It’s also one I don’t believe either team is ready to fill.