You are at:Home»Awesome»McCann Pays it Forward

Jeff McCann was lucky to survive this crash at the Lake of the Ozarks Shootout—so he’s decided to pay it forward to those who saved his life. (Photo courtesy Sam Jirik.)

Based on the story posted on speedonthewater.com a couple of weeks ago featuring images of North Carolina performance boater Jeff McCann’s accident on Saturday morning during the Lake of the Ozarks Shootout in Central Missouri, thousands of people were captivated by the outcome of McCann’s spectacular crash in his Donzi Marine 22 Classic as well as the series of pictures taken by Arkansas performance boater Sam Jirik.

While the news that McCann would be leaving the hospital a few days after the Shootout was good, more great news stemming from the accident came about last week when McCann, his wife, Keri, and their friends set up a GoFundMe campaign to benefit the folks who saved his life on Saturday, Aug. 27.

Citing the heroism of Missouri State Highway Patrol Corporal David Echternacht, who was the first person to respond to the accident and put his own life at risk in order to save Jeff’s life, the McCanns decided to focus the countless requests and suggestions they received to set up a fundraiser following the incident on their friend and hero—Cpl. Echternacht.

The McCanns said that Echternacht’s heroism, bravery and quick response are the reasons Jeff is still alive after the crash that left him injured and unresponsive while face-down in the water. So they asked “Echey” if he had a charity that they could partner with and he didn’t hesitate, pointing them toward the non-profit organization known as The MASTERS, which stands for The Missouri Association of State Troopers Emergency Relief Society. 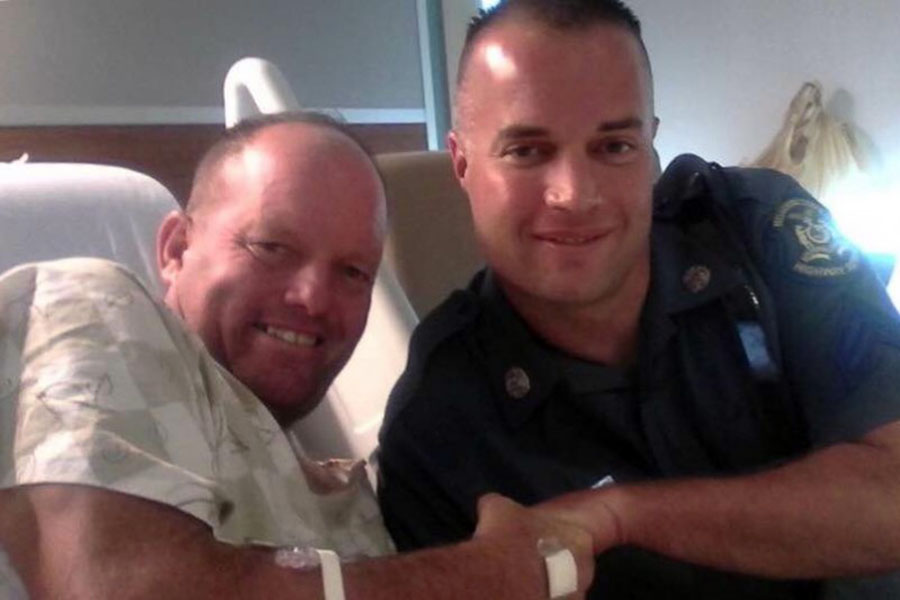 According to the GoFundMe page, The MASTERS was formed in 1979 for the purpose of establishing an entirely voluntary benevolent fund for the financial aid of a trooper’s immediate surviving family member and children if he or she is killed in the line of duty.  As part of the program, the directors of “The MASTERS” from the area take the trooper’s family under their protective guidance and provide financial assistance.

The McCanns felt that this would be the perfect way to recompense those who protected and guided Jeff after the accident. They also wanted to thank everyone for the outpouring of love, support and friendship following what could have been a tragic event.

They are hoping to raise enough funds to contribute a substantial donation to The MASTERS as well as a non-profit organization started by the McCanns for various charities in their own community. They’re also working with next week’s The Lookout Shootout Poker Run (Sept. 24) in their hometown of Morehead City to raise money for the organizations.