You are at:Home»Awesome»Nor-Tech’s Real Deal 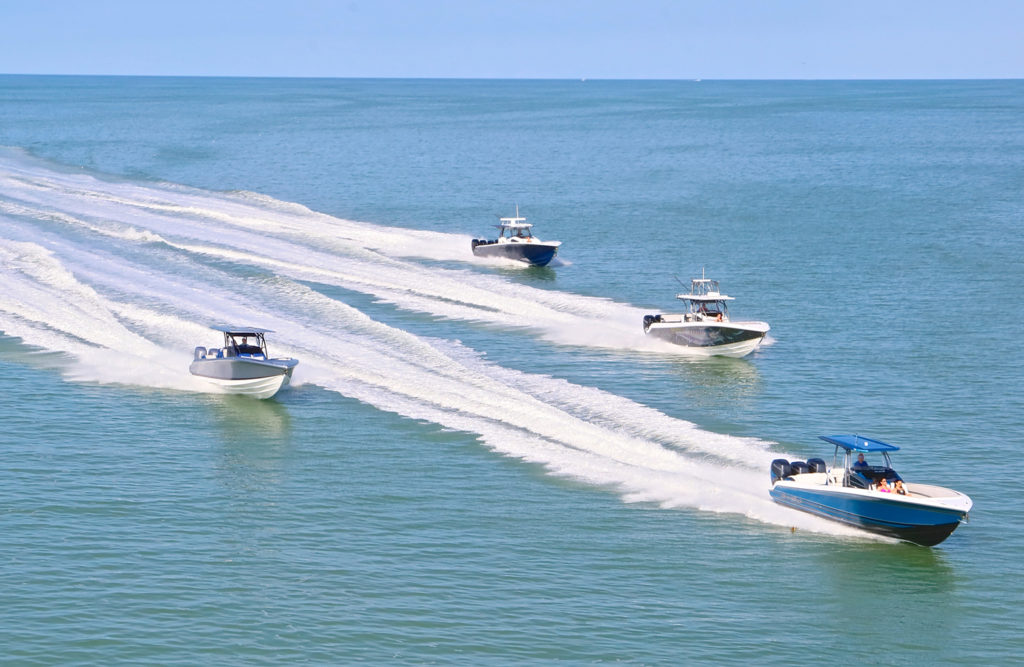 In and of itself, a high-performance powerboat dealer meeting is newsworthy. That’s because there aren’t a whole lot of high-performance powerboat dealers, much less brand-specific networks of them, left. Once upon a time, go-fast boat builders such as Baja, Donzi, Formula and others had annual late-summer-through-fall conferences where dealers learned about new models and ordered boats.

That time is more than 10 years gone. Dealer meetings are now the unicorns of the go-fast powerboat world. OK, so maybe they’re not quite unicorns, but you definitely don’t see or hear about them every day.

There are exceptions, of course, such as last week’s Nor-Tech Hi-Performance Powerboats three-day dealer meeting—the second in the 29-year history of the company—in Cape Coral, Fla. More than 16 Nor-Tech dealers from as far as Venezuela to as close as Fort Lauderdale gathered at the Westin Cape Coral Resort to learn about what’s happening now with the Fort Myers-based builder’s go-fast center consoles, V-bottom sportboats and catamarans, and what it has planned for the future. 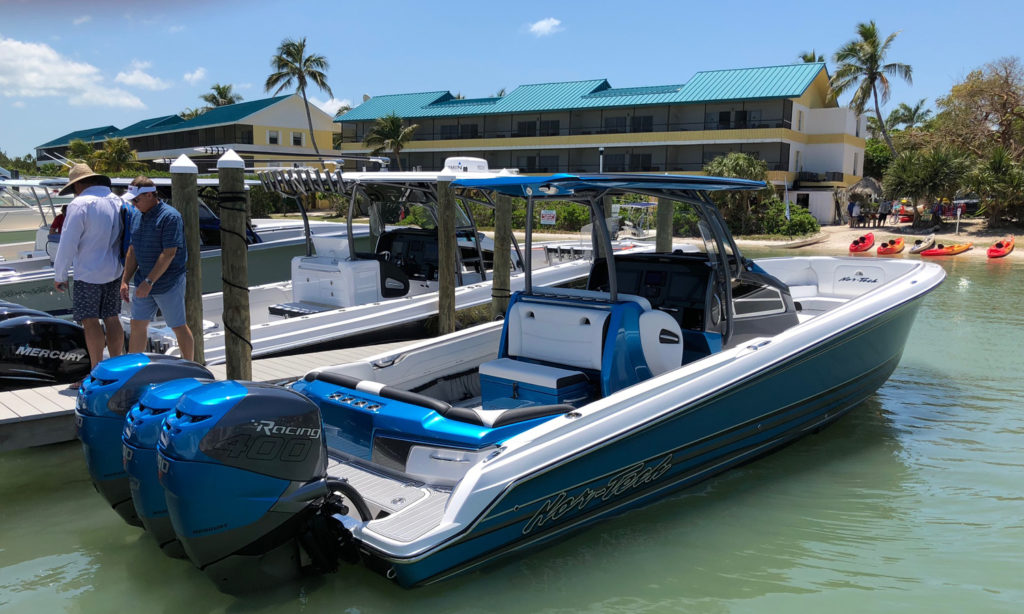 Save for the release of the new 340 Club Sport, a sporty (as the name would suggest) version of Nor-Tech’s 34-foot center console powered by a trio of Mercury Racing Verado 400R outboard engines—the 34-footer runs 84 mph—the coolest news from the meeting is that the company’s new 50,000-square-foot production facility should be completed and operating by late July or early August. And that’s a big deal for Nor-Tech and its dealers because the company is running flat out to keep up with current demand for its 34-, 39- and 45-foot center consoles.

Trond Schou, who cofounded Nor-Tech with fellow Norwegian Nils Johnson, said he hopes the expansion will enable the company to build 100 boats this year. The new facility will also translate to new jobs in the area, so the news is good on multiple fronts.

Now, if Mercury Marine and Mercury Racing can just clear up its 14- to 16-week backlog of Verado 350 and Verado 400R outboard engines—that was a frequently visited topic during Nor-Tech’s dealer event. (No dig intended on Mercury or Mercury Racing. Success is a good thing to have.) Nor-Tech dealer manager Geoff Tomlinson took pains to point out that changes orders as they apply to the Verado 350 and 400R will create unavoidable delays. 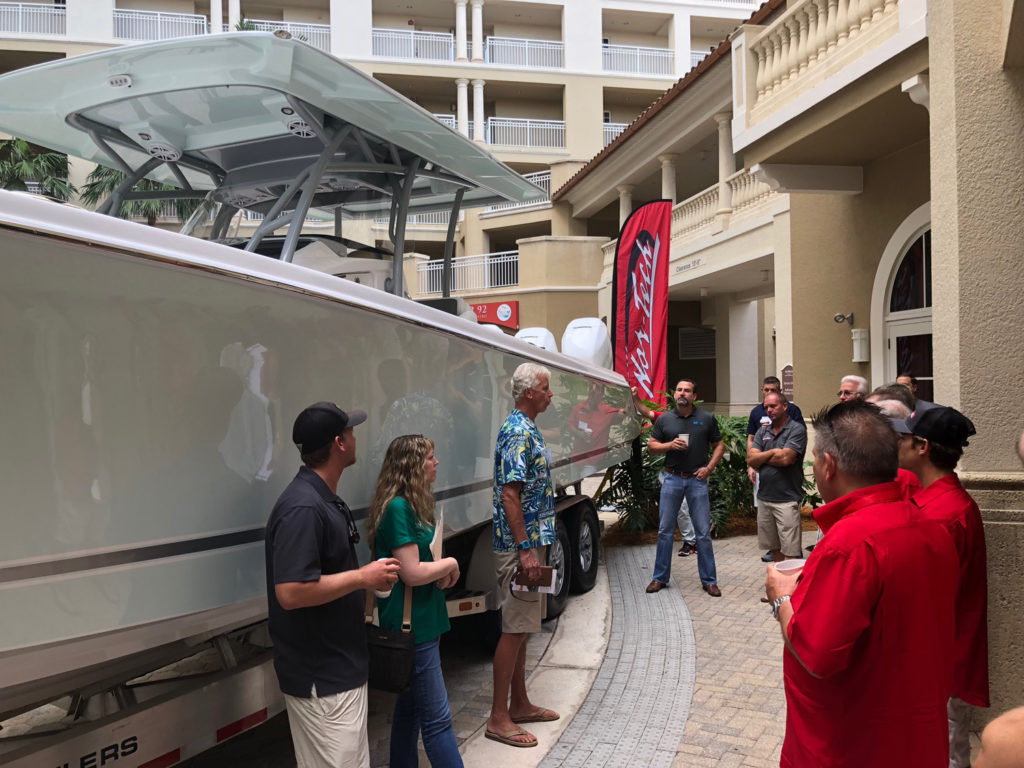 Bill Tweedy (center) of MYCO Trailers was one of several vendors who made presentation to Nor-Tech’s dealers.

As difficult as you might find it to believe, pink mold on vinyl was among the hottest topics of discussion during the meeting. Apparently, the Environmental Protection Agency-mandated elimination of arsenic in vinyl has led to outbreaks of the unsightly stuff on vinyl upholstery in marine environments, and according to Nor-Tech’s customer service manager Matt Lamb there’s no rhyme or reason to where and when such outbreaks will occur. (And they’re not covered under Nor-Tech’s warranty program.) Several dealers on hand offered homespun preventions and remedies, but in the end there was no consensus on how to handle pink mold, only that it’s a potentially nasty problem to be aware of.

But beyond those and myriad other business details covered during the event, the undeniable value for all at the meeting was team-building between Nor-Tech and its dealers and among the dealers themselves. From Bob Crow of SoFlo Boats, who has sold a slew of Nor-Tech models in the past five years, in Fort Lauderdale to Bernie Neuhaus of Marine Unlimited, who just sold his first one, in Toms River, N.J., there was a strong feeling camaraderie based on shared love for and belief in the brand created by Schou and Johnson.

And for the record, those two colorful gentlemen are as entertaining as they’ve ever been. Gracious doesn’t even begin to the describe them.

Yes, high-performance dealer meetings are rare and likely always will be. But sometimes less is more. Nor-Tech’s event, one of the few of its kind remaining, was simply exceptional.