You are at:Home»Awesome»Straight-A Student Driver 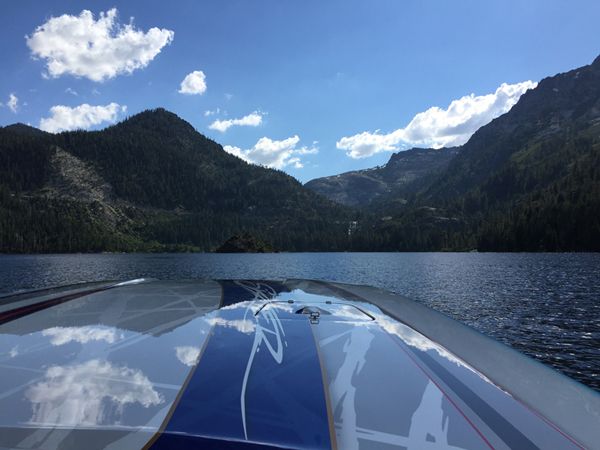 At one point during Friday’s session, Miller and Bruggemann ended up off the shore of Lake Tahoe’s famed Emerald Bay.

Chris Miller loves high-performance machines. When he isn’t driving his Cantina Racing Trophy Truck with an 870-hp engine and 32 inches of travel in SCORE International Off Road Racing competition, the 43-year-old Southern California-based businessman is piloting either his Beechcraft King Air or Learjet aircraft. A longtime V-bottom owner, Miller easily could have been overconfident in his ability to teach himself to handle the Skater 388 catamaran—powered by Mercury Racing 1350 engines—he purchased a couple of weeks ago from Karl Koster in Discovery Bay, Calif.

But then, Miller, and his wife, Jennifer, have five little girls from two to 11 years old at their home near San Diego. And even if he didn’t have a family to cherish and protect, overconfidence simply isn’t in the man’s vocabulary. But responsibility and humility are.

“These boats are very cool, but there is massive responsibility that comes with them,” said Miller, who is spending the summer—per family tradition—with his wife and children on Lake Tahoe’s north in Nevada. “You have to be humble when you approach it. You have to listen. You have to learn from the best people.”

In Grant Bruggemann of Grant’s Signature Racing in Bradenton, Fla., Miller found one of those people. The referral came from Tony Cutsuries, Skater’s national sales manager, and last Thursday through Saturday Bruggemann, who was joined by his wife Kellie Lee-Bruggemann—they married during the 2017 Sarasota Grand Prix the week prior— schooled his new pupil on the ins and outs of piloting the 38-footer.

“We started with the basics of everything from kill switches to throttles,” said Bruggemann, who in addition to running his rigging shop throttles the STIHL Skater 388 offshore racing catamaran. “Chris had owned V-bottoms before, but this is his first catamaran. So we went over everything from trimming to how the boat reacts when you back off the throttles. 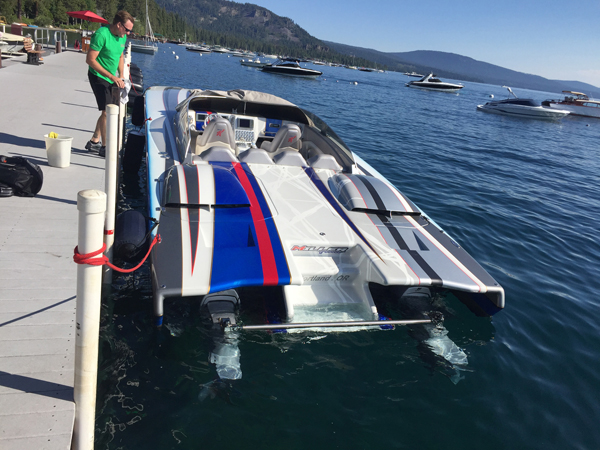 Miller’s Skater 388 catamaran will be based out of Lake Tahoe’s north shore this summer.

“With this kind of boat and this kind of power, before you know it you can be doing 170, 180 mph,” he continued. “Chris wanted to learn how to operate the boat correctly from the get-go—he’s a good student who listens extremely well. He’s a natural, really. After I showed him what the boat could do, we went through practice turns at 60, 70 and 80 mph. By the end of Friday, we did our last turn at 130 mph. He said, ‘OK, that’s enough for me now.’ For the most part, 100 to 120 mph was more than enough for him.”

Miller could not have been more delighted with the experience.

“Obviously, when you get into a boat like this you want to learn to drive it the right way,” he continued. “Tony at Skater told me, ‘Grant is the guy,’ and he and Kellie came out. She seemed to know the boat as well as he does—she had the laptop plugged in and was going through the engine codes when we started. I learned all the systems. I learned about the fuel. I learned that the props were rotating in and how to adjust for that with the drives. He put me through my paces. We must have done more than 100 different turns and all kinds of straightaway acceleration.”

Asked what his biggest takeaway was from the cockpit of his catamaran with Bruggemann, Miller paused to think for a moment.

“I fly airplanes,” he said. “What’s very similar to flying aircraft and running these boats is that you need to plan your descent pattern based on where you are where you want to be, when you need to be slowing down, where you can safely apply speed and where can’t. You have to plan with this boat in a very similar way to how you plan a flight. The Skater also is really similar to our trophy truck. The whole premise with all that travel and horsepower is to get on top of it and float on top of it. You can go over a four- to six-foot hole at 100 mph in the truck and literally just fly over it.”

Miller paused again to think about it, then added, “But you always have to respect it.”