You are at:Home»Boat Show»Pulling Back The Curtain On Boat Shows

Despite its lovely waterfront venue and dock displays, there is work to be done at the Miami International Boat Show. Photo by Pete Boden/Shoot 2 Thrill Pix.

As anyone who regularly reads this column knows, I have a love-hate relationship with the Miami International Boat Show. I came to loathe the event when it was at the decrepit Miami Convention Center and Sea Isle Marina. Even the raw energy of South Beach wasn’t enough to make the event compelling. Even Cigarette Racing Team’s ever-amazing displays weren’t enough to overcome the convention center’s death-pallor lighting.

After almost 20 years of covering the Miami show at its former home, the best thing I could say about it was that it was walking distance to the casual lunch spots on Lincoln Road, meaning that if you were willing to abandon the show for an hour or two (or three) you could find edible food without getting gouged for it. When the best thing you can say about an event involves lunch off-site, the event and its venue have issues.

So for me, the show’s move to Miami Marine Stadium on Virginia Key—and people need to remember the event had to relocate as it was booted from the convention center after 2015—was a breath of fresh air. No doubt, getting to and from the new venue remains a nightmare, and if the organizers don’t figure it out soon they’ll lose their audience.

But it puts boats in the water within a short walk of engine and accessory displays.

Exotic go-fast boats are in the water near endless arrays of other bright shiny objects of interest to high-performance powerboat enthusiasts. It has a historic location on a beautiful South Florida waterway, framed by the dramatic downtown Miami skyline. And there are endless and easy demo rides from the docks.

If boat shows really are, in fact, actual shows at least now the Miami event has all the elements in place for, well, actual showmanship.

But traditional boat shows such as Miami—and almost all large consumer product exhibitions for that matter—play a numbers game based on attracting big crowds, the members of which may or may not have any real interest in, much less intent to purchase, the products on display. To call that a targeted marketing strategy would be a stretch. It’s one thing to attract the masses to an attractive outdoor venue. Vetting them as even semi-serious potential buyers is another matter. 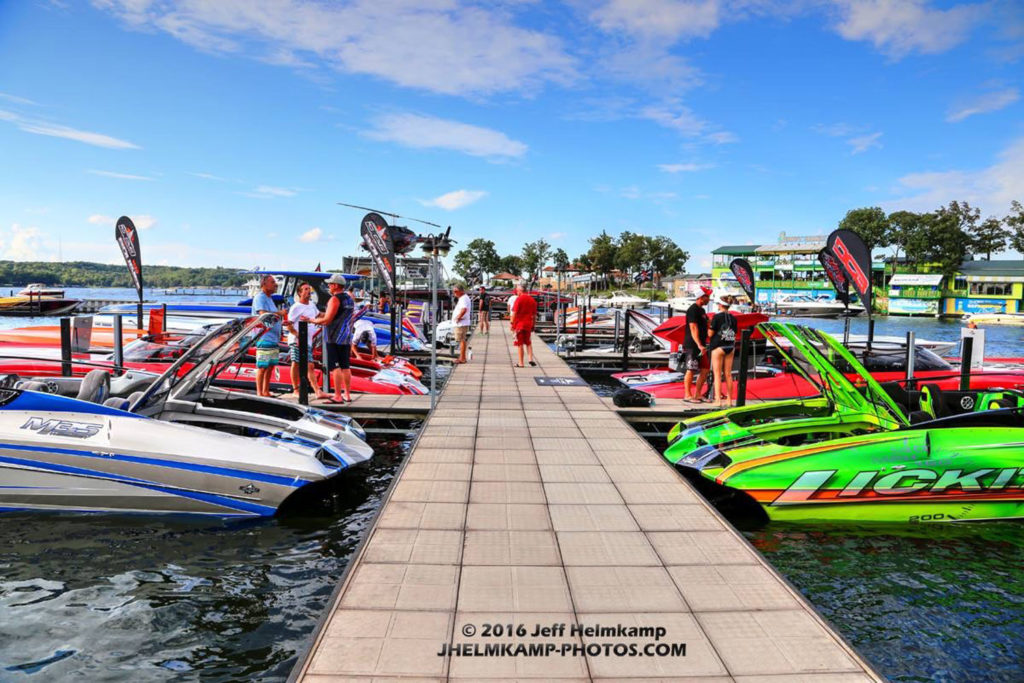 So it’s no wonder that high-performance powerboat builders have of late been singing the praises of smaller events such as the Fort Lauderdale and Palm International Boat Shows. Rooted in the big-dollar yacht, cruiser and sportfishing markets, those shows tend to attract smaller groups of more-serious-minded buyers and fewer folks just strolling the docks to window-shop big-ticket items on sunny weekends. (Nothing wrong with that as an entertaining activity, by the way, but it doesn’t move product.)

To gain a bit more insight from a veteran exhibitor, I reached out to a longtime friend in the aftermarket high-performance marine parts business who has displayed his companies’ wares at events around the country. He agreed to talk on the promise of anonymity.

“While the Desert Storm Poker Run street party is grand, it doesn’t separate the actual boaters from people just killing time and there to party in the same way, for example, the Florida Powerboat Club does with its Poker Run Village in Key West,” he said. “The Poker Run Village in Key West reigns supreme, at least in my opinion, because that area is a common hub close to the where participants dock their boats. That hub guarantees boat-consumer traffic. Being too spread out, something I’ve seen at other poker runs and such with their own ‘boat-and-product ‘shows,’ doesn’t work.”

My friend, who paid more than $20,000 for 800 square feet of display space in Miami this year, then turned his focus to the bigger picture. Today’s boat shows, he said, are antiquated and mostly missing the mark.

“We have a format problem with boat shows today,” he said. “We’re doing and looking at them the same way we did yesterday, not how we need to do them today, much less tomorrow. Boat shows need to be like the circus as an ‘everything under the big-top’ type of deal. Take the Mall of America. It’s not just shopping. It’s an experience. Most boating events and shows don’t understand the importance of the experience,”

“We cannot just rely on having boats to look at as being ‘the show,’” he added. “ It’s not enough.”