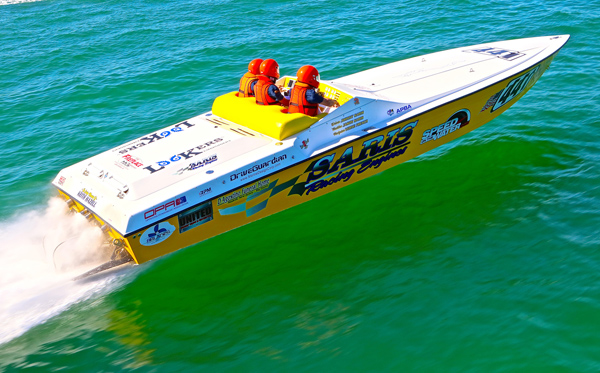 Validated on and off the racecourse by Jason and Johnny Saris, 4-SPEED propellers from BBLADES will be available to the public early next year. Photo by Pete Boden/Shoot 2 Thrill Pix.

If you have a great memory and are into high-performance powerboat propellers, you probably recall that BBLADES Professional Propellers unveiled its own new line of four-blade stainless-steel wheels dubbed the 4-SPEED series earlier this year at the Miami International Boat Show. You may even have been eager to try a set of the 15-1/2-inch diameters props, which are available for Bravo and Bravo-style drives as well as outboard engines in pitches from 24 to 35 inches, on your boat.

But the 4-SPEED propeller unveiling during the Miami Show in February was by design a product release rather than a full-scale rollout. According to Brett Anderson, the founder of the full-service propeller company in Princeton, Wis., that was by design.

“We released them in Miami this year, but did not have the inventory we needed until June,” said Anderson. “So we kind of slow-rolled them out. We had some good success over the summer with them, but we didn’t brag about it. Jason and Johnny Saris used them on some of their customer boats and on their raceboat, and they loved them. They’ve actually been running the prototypes. All summer, we’ve been collecting data and building inventory—in right- and left-hand rotations—and now we have it. So we’re going into 2018 with a bunch of 4-SPEED products. We can start pushing our own four-blade propellers next year.”

“The 4-SPEED propellers from BBLADES provide the best acceleration and handling we’ve experienced with a four-blade prop, ever,” said the senior Saris. “Whether you’re trying to carry the bow or running neutral trim through turns, they just plain work better than any other props we’ve ever used.”

His son agreed. “We were able to go down a full two inches in pitch size because of the added grip from the 4-SPEEDS,” he said. “The grip is fantastic—it’s like putting sneakers on our Saris Racing Engines raceboat. We’ve had success running them in both high-and-low X-dimension setups. I run one on my Kryptonite V-bottom, too, at eight percent slip. That’s an awesome number.”

Though the 4-SPEED propellers are cast at a foundry in Wisconsin, BBLADES owns the tooling and handles all the finishing and fine-tuning.

“They are like any other propellers in that they work phenomenally on some boats and not as well as on others,” said Anderson. “But what I really like about them is their true 15-1/2-inch diameter, which works well with reasonably high X-dimensions. The barrel isn’t flared, but it’s long so if you need some help with stern lift it’s there. And the pitch numbers are real—they’re not an ‘inch less’ than we say they are.”

According to Anderson, BBLADES will have something new in addition to the 4-SPEED propellers on display at the 2018 Miami International Boat Show. But he declined to elaborate on what that might be.

“Let’s just say that we see a whole lot of opportunity for other products in the marketplace,” he said. “We think it’s wide open.”