You are at:Home»Commentary»The Biggest Stories Of The Decade

As it happens, speedonthewater.com is celebrating its 10th anniversary this year. That inspired Jason Johnson, my speedonthewater.com co-publisher and fellow offshoreonly.com columnist, to suggest I present a list of the top go-fast boating news 10 stories of the last 10 years. And it seemed like a good idea. Yet with almost 6,000 stories published on the site since 2009, it was easier suggested than done.

What makes it so very hard is that I know I will leave out something big. So I apologize in advance for at least one glaring omission in this otherwise brilliant piece of comprehensive work. (Yes, I’m joking.)

What follows in no particular order is my list of the top 10 go-fast boating stories of the past 10 years. Of course, Johnson and I have written multiple pieces on all of the subjects you’ll find below. Big stories are dynamic. As such, they tend to continually evolve.

Here goes nothing. Or something. Either way, I’m diving in. 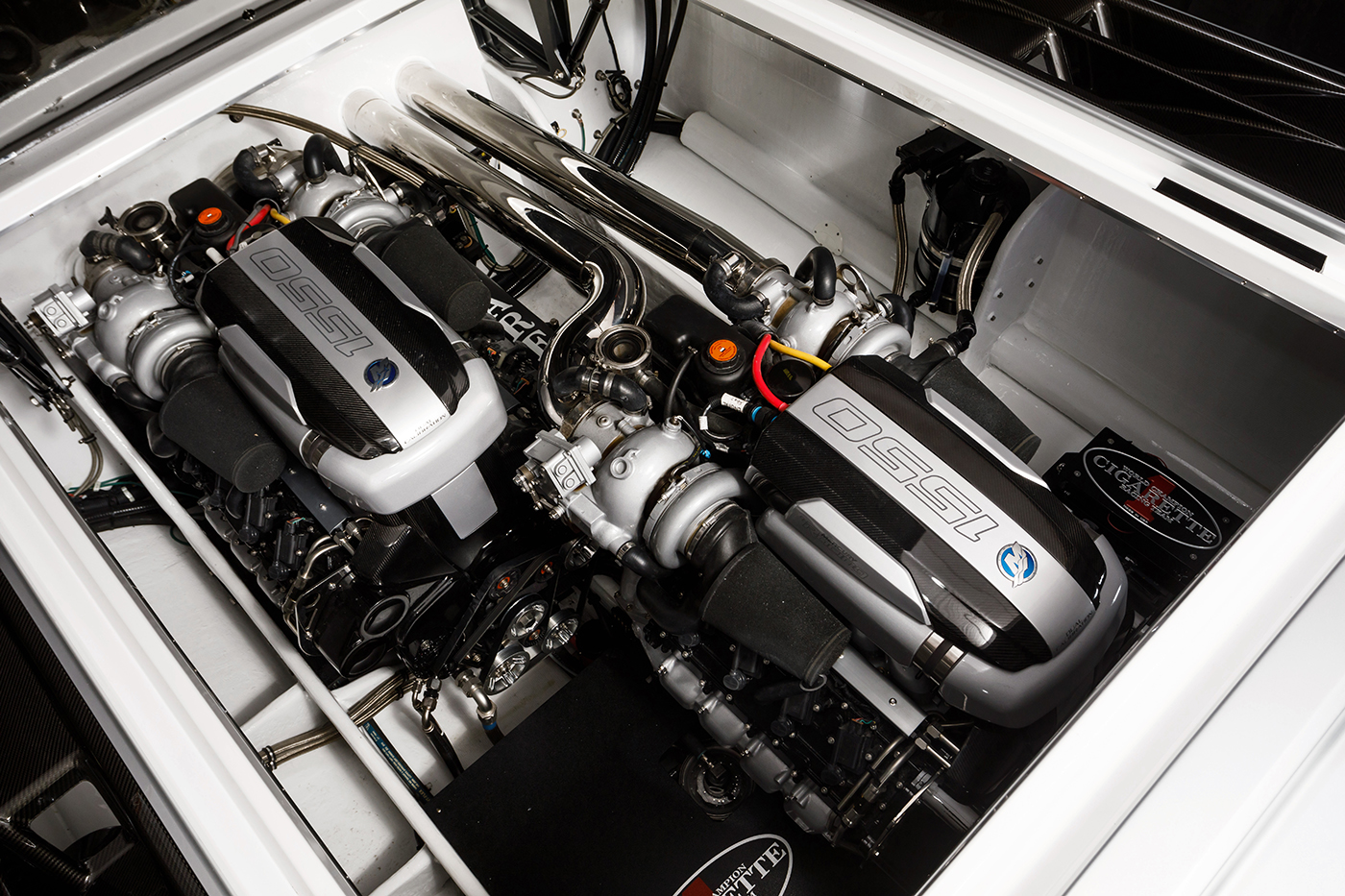 In 2010, Mercury Racing unveiled its first 1,350-hp quad-cam four-valve twin turbocharged engine at the Miami International Boat Show. And if you don’t believe it changed the high-performance marine engine world forever, just ask an independent marine engine builder how his new engine business is these days. Since the release of the 1350, the Fond du Lac, Wis., company has added several models to the QC4v series, from the naturally aspirated 860 to the 1550/1350 and 1100/1350 dual-calibration offerings. They have become the standard for big-power stern-drive catamarans and V-bottoms. The exception to this is the supercharged 700 SCi—another Mercury Racing product. 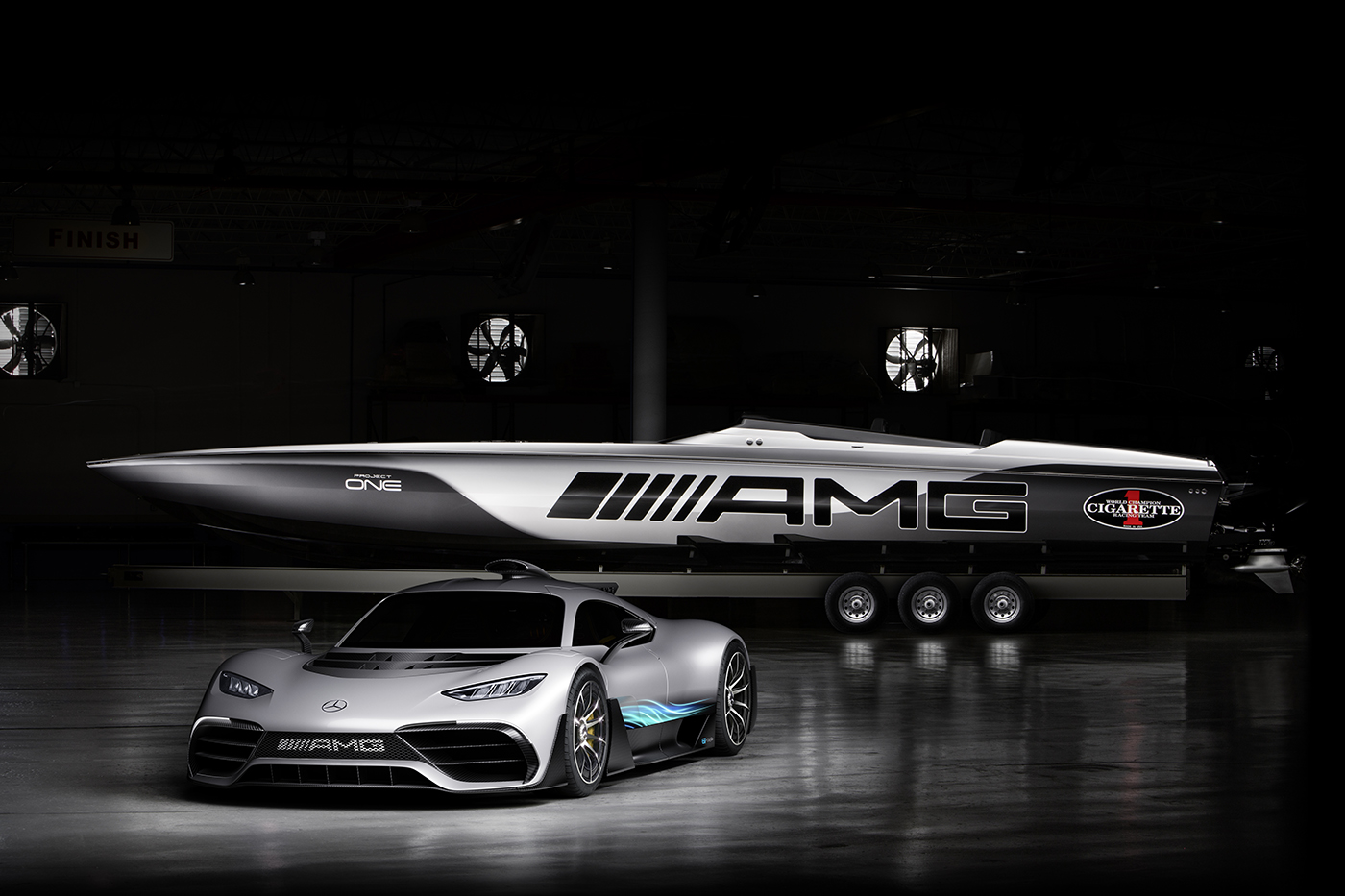 For 12 years, Cigarette Racing Team has enjoyed a unique marketing partnership with Mercedes-AMG.

I can already hear the groans coming the Cigarette haters out there—and for reasons I’ll never fully understand there are a lot of them. Yes, it has been a marketing partnership between two luxury brands rather than an in-depth technology partnership. But according to Cigarette’s owner Skip Braver—you know, the guy who pays the bills—the co-branding relationship has been beneficial for both parties. Simple fact? Though many other go-fast boat companies have tried cross-marketing partnerships, none have lasted as long and had the high-profile/status of the Cigarette-AMG relationship. And while there are plenty of would-be marketing geniuses out there who scoff at them, I think the Cigarette-AMG boat-and-car combos displayed at the Miami International Boat Show every year are spectacular and add value to the event itself. The first Cigarette-AMG boat was unveiled in 2010 and powered by—you guessed it—the first pair of Mercury Racing 1350s.

The Loss Of Mike Fiore 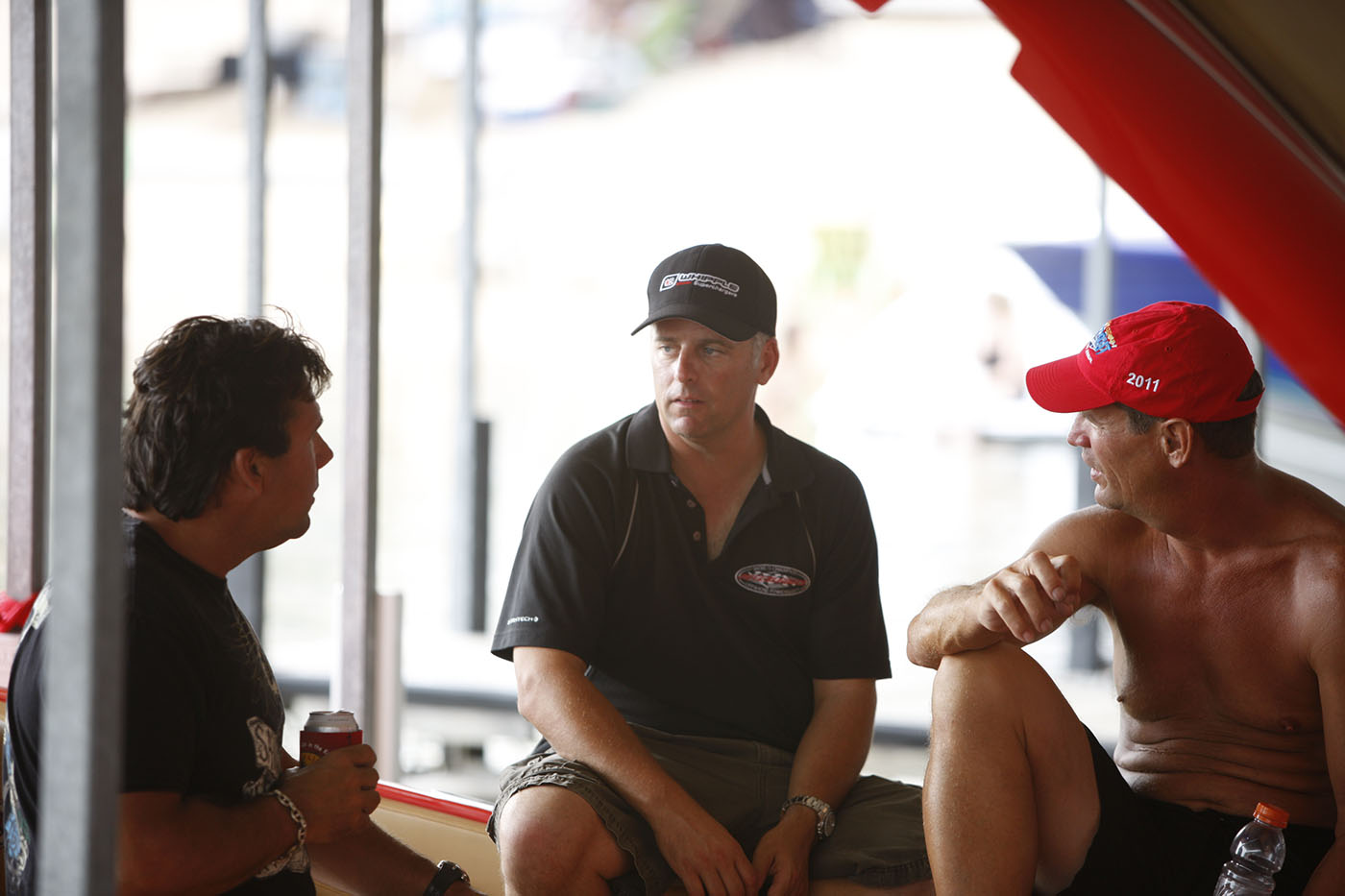 When Outerlimits Offshore Powerboats founder Mike Fiore died a few days after crashing during the 2014 Lake of the Ozarks Shootout in Central Missouri, the high-performance marine industry lost one of its brightest stars. Not without his struggles as a businessman, Fiore, who was just 44 years old when he died, was a brilliant boat designer with a keen eye for styling. He learned his craft from his father, Paul, the founder of Hustler Powerboats, who died in late November. Mike Fiore created big, brawny V-bottoms with sexy, sultry lines. He was an artist, and his boats were his art. 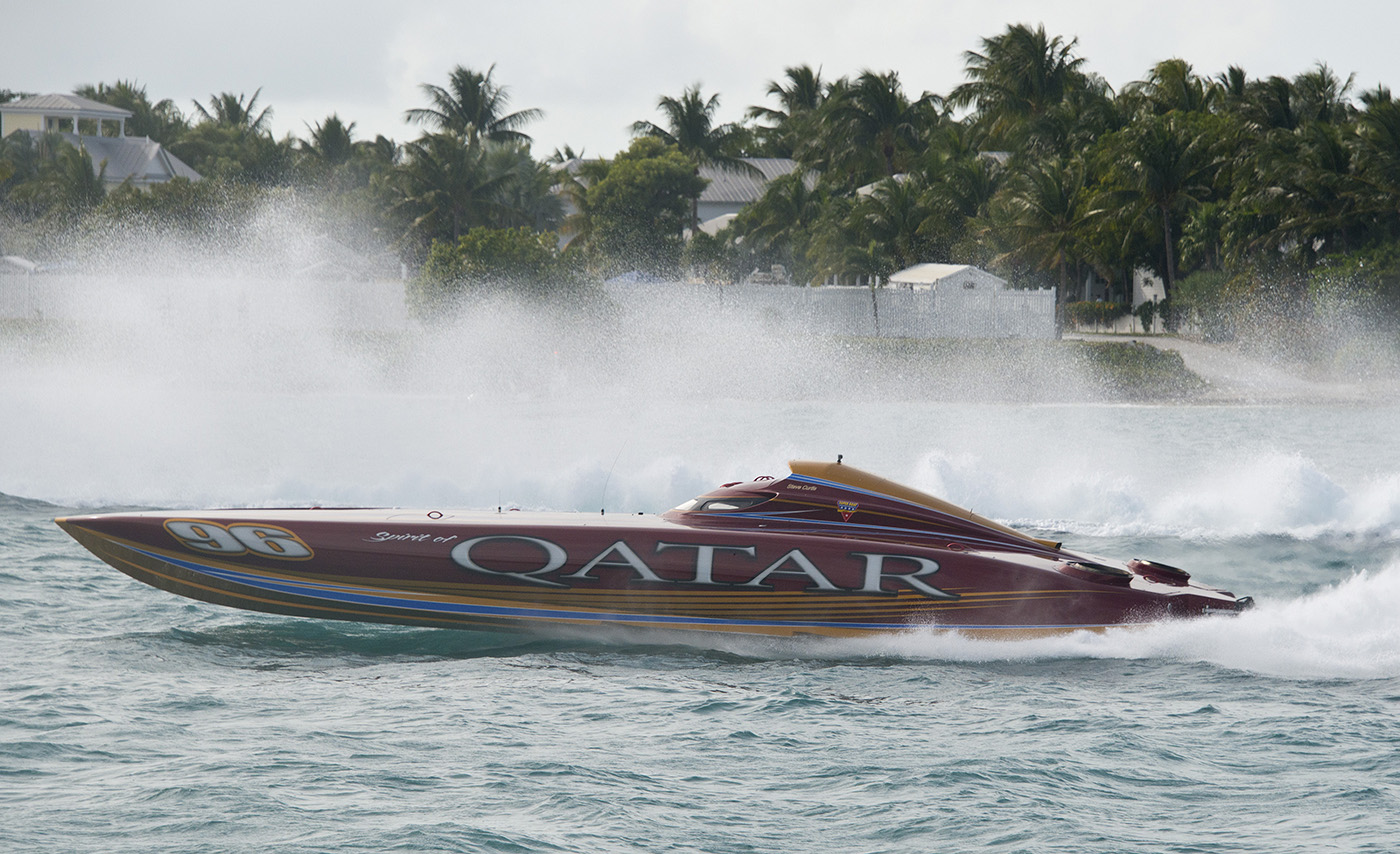 The Lake of Ozarks Shootout speed record of 244 mph set by this turbine-powered Mystic catamaran will stand forever. Photo by Andy Newman.

How special was the 244-mph top-speed laid down by Steve Curtis and Sheikh Hassan bin Jabor Al-Thani in Al Adaa’am/96 Spirit of Qatar, a 50-foot turbine engine-powered Mystic Powerboats catamaran at 2014 Lake of the Ozarks Shootout? Put it this way: That record will stand forever, and not just because the Shootout course has been shortened from one mile to three-quarters of a mile.  TheAl Adaa’am/96 Spirit of Qatar record was the product of an unlimited budget combined with meticulous preparation and two guys willing to put their lives on the line in a superb boat during an absolutely perfect run on the edge—and maybe even over it—of control. Yes, records are made to be broken. This one won’t be. 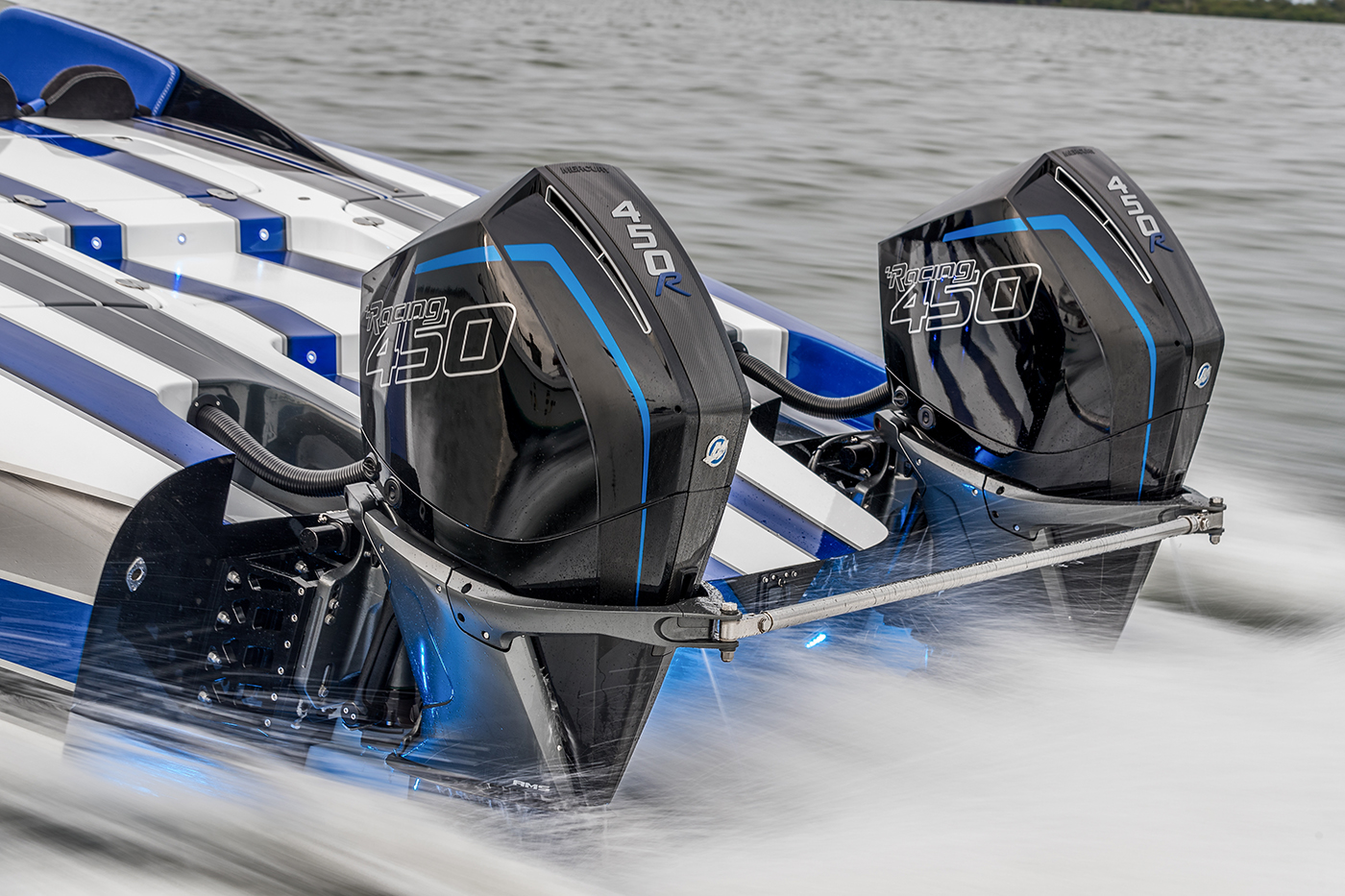 In no small measure, the wild popularity of today’s outboard engines for performance center consoles and sport catamarans began with the introduction of the first Mercury Marine supercharged in-line six-cylinder Verado outboards in the early 2000s. In the years that followed, Mercury Marine added more-powerful outboards to the series and Mercury Racing ended up with a 400-hp version. As the Verado line grew, so, too did its reliability. Warranties and extended factory protection grew with it. (Trust me, friends, Mercury wouldn’t offer the protection it does on its outboards if its leadership believed you were going to have to make frequent warranty claims.) Now Mercury Racing has the supercharged V-8 450R, the naturally aspirated V-8 300R and the six-cylinder supercharged 400R in its product stable (the Verado designation has been dropped by the folks there). And the company cannot ship them fast enough. 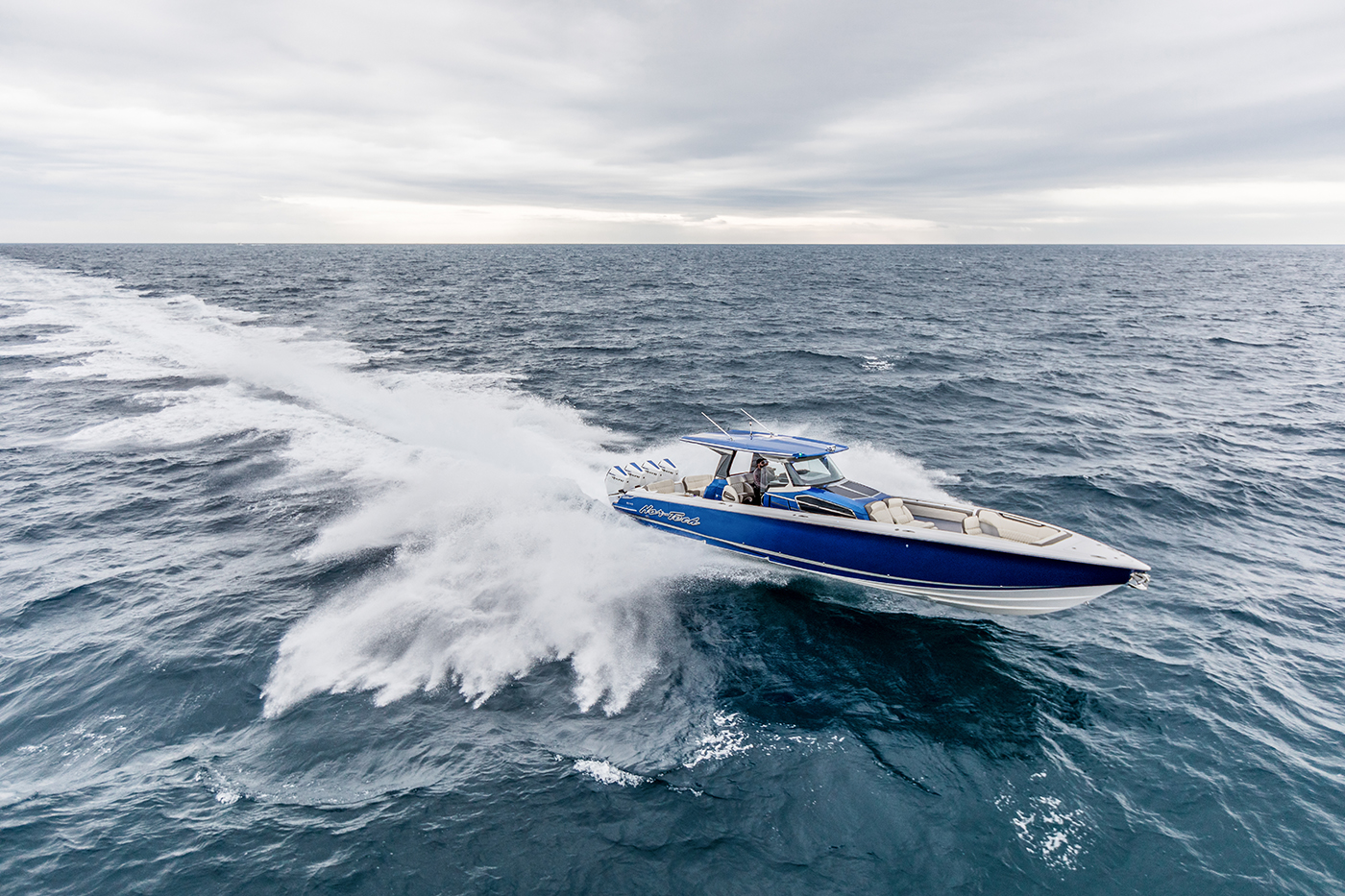 For several years, Fountain Powerboats led the angling-centric go-fast center console world. In the early to mid 2000s the Washington, N.C., company’s center consoles were far out-selling its V-bottom sportboats. Take nothing away from Fountain, but those were outboard engine-powered fishing boats designed to get anglers, particularly from those in the kingfishing tournament world, to and from the fishing grounds in the least amount of time. They weren’t the outboard-equipped, luxury-laden social platforms of today from the likes of Cigarette Racing Team, Deep Impact, Midnight Express, Mystic Powerboats, Nor-Tech and Sunsation. You’d be hard-pressed to find a rod-holder, much less a live-well, on one of those models. And Fountain has since joined that center console segment with its NX series, which it launched two years ago. 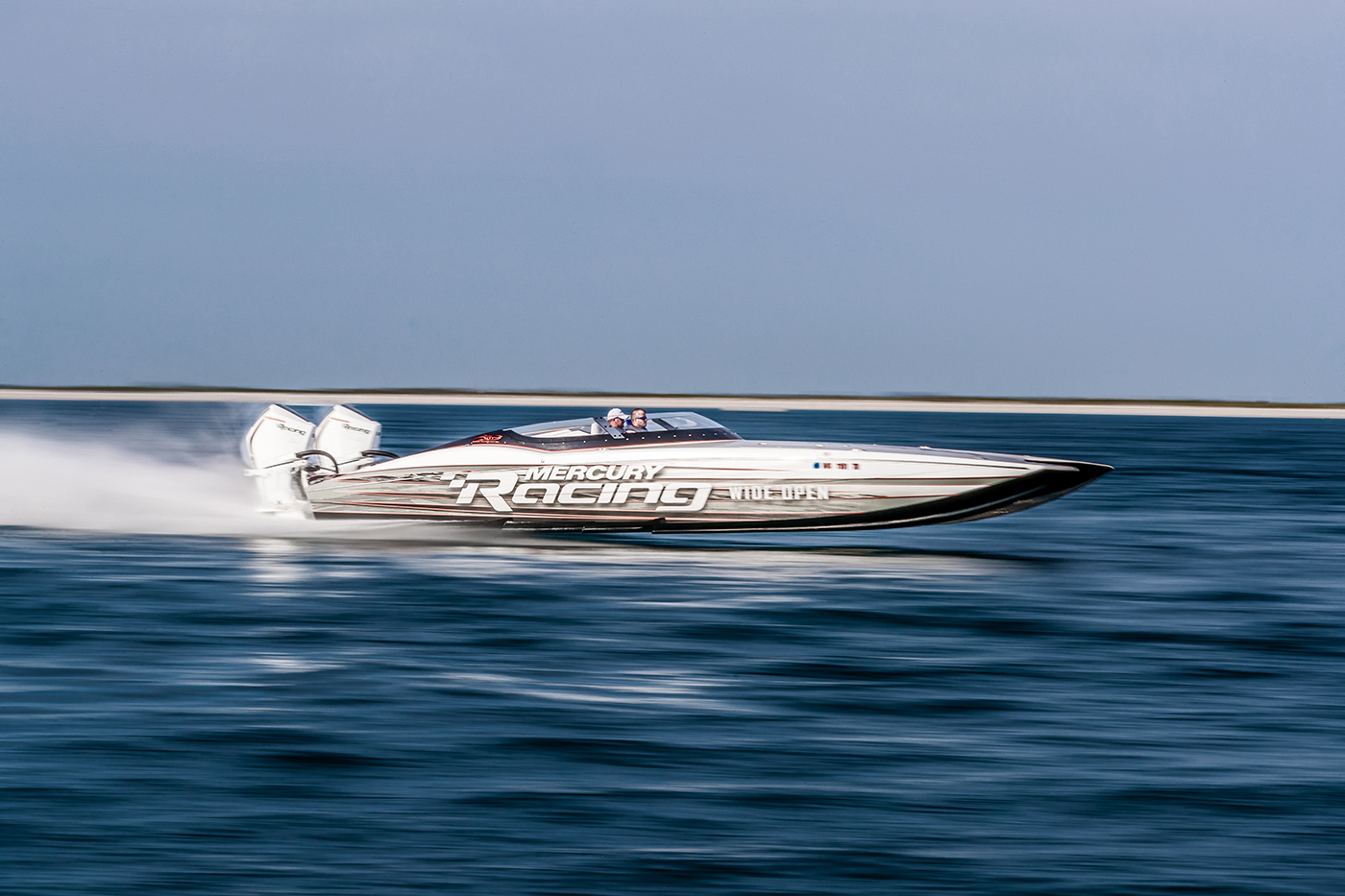 The Death And Rebirth Of Fountain Powerboats 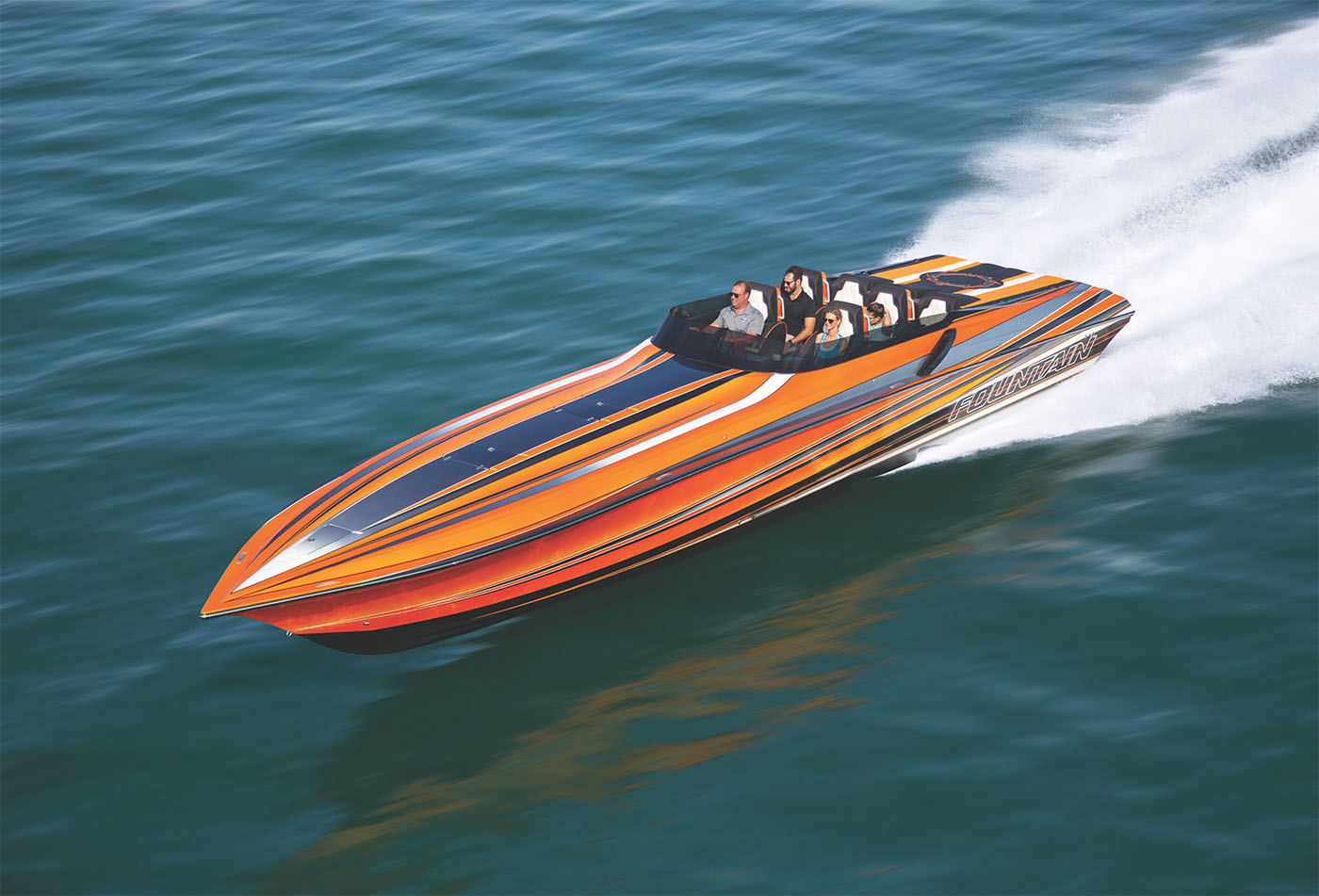 Fountain is back in a big way.

In 2009, Fountain Powerboats filed for bankruptcy protection. Three years later, the outfits that picked up the Fountain reins—American Marine Holdings and Liberty Acquisitions—filed for bankruptcy protection. And until almost three years ago when Fred Ross purchased the Fountain, Donzi and Baja brands, they languished in semi-dormancy. A few half-hearted attempts were made to revive the Baja brand, yet slapping an outboard on an outdated 20-something-foot hull didn’t cut it. But under Ross’ passionate ownership, the Fountain, Donzi brands and Baja brands are being revived in a big way with new and updated models.

Offshore Racing’s Changing Of The Guard 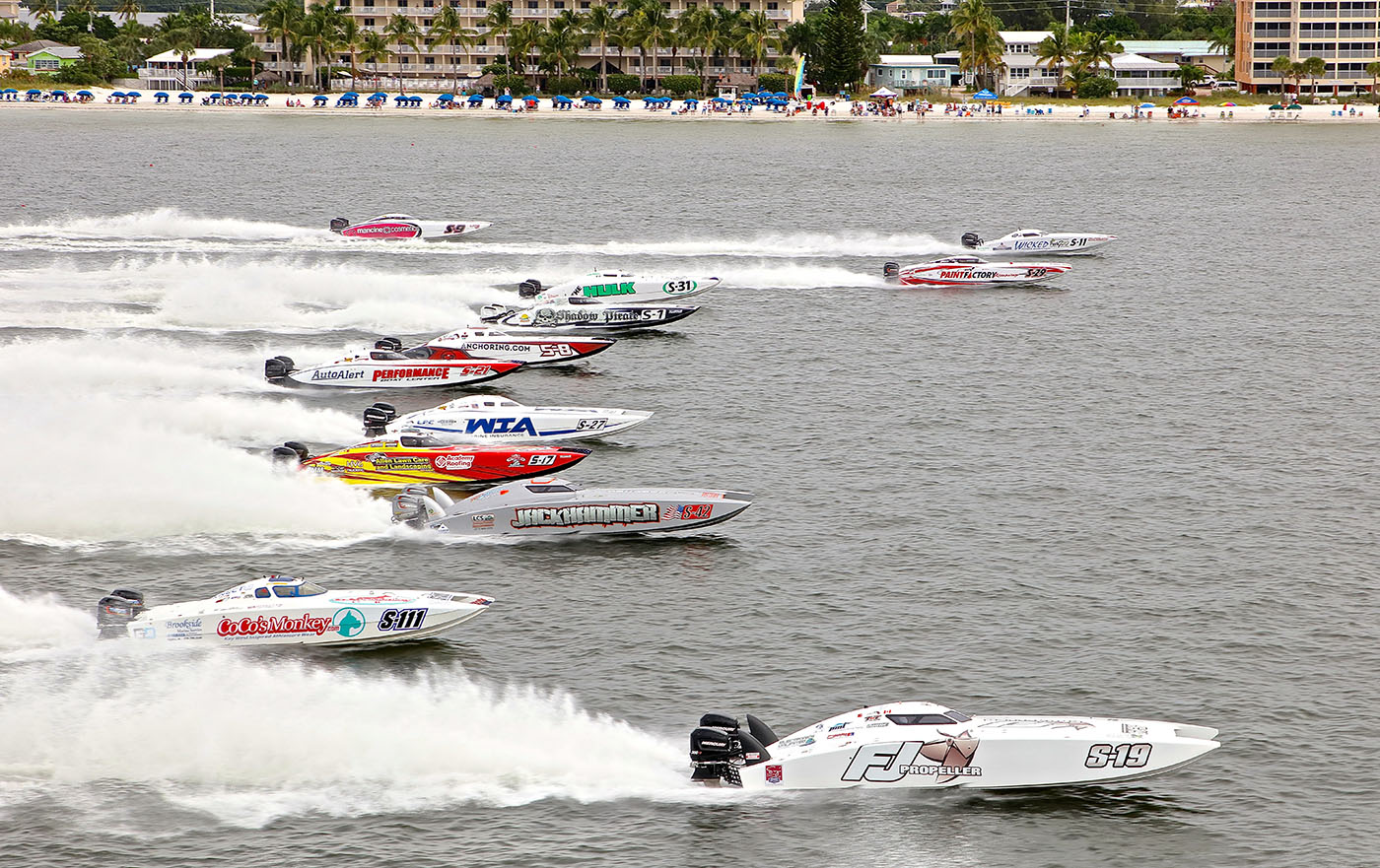 The APBA Offshore Championship Series made a big splash in its inaugural year. Photo by Pete Boden/Shoot 2 Thrill Pix.

Since the demise of APBA Offshore LLC in the early 2000s, offshore racing has been in decline. The ill-conceived Offshore Super Series—letting racers run the show never did seem like a recipe for success—that emerged on the heels of APBA’s exit didn’t last long. That left would-be racers with two options, Super Boat International or the Offshore Powerboat Association. Both had their strengths and weaknesses, but neither had the pulling power of APBA Offshore. That changed this year when OPA partnered with Powerboat P1 for the uber-successful six-race inaugural American Power Boat Association Offshore Championship Series, which will return in 2020. As for Super Boat International, it has faded out of the picture since Race World Offshore won the contract to produce races in Key West, Fla., for the next four years.

The Miami International Boat Show’s move to Virginia Key has been a blessing and a curse. Photo by Pete Boden/Shoot 2 Thrill Pix.

In 2015, the Miami International Boat Show had its last run at the dilapidated Miami Convention Center. Though the convention center was a dump with bad lighting and worse food, it had one thing going for it that the go-fast powerboating crowd loved—proximity to South Beach nightlife. The event’s move to Virginia Key has made for a lot more boats in the water—always a plus for, you know, a boat show—but also has created access nightmares for attendees. More than a few readers who used to attend the show for two or even three days now report going for just one day as getting to and from the venue is work. Combine that with the show’s ghastly, overpriced food and drink and you have exhibitors and attendees questioning the event’s overall value.

Honorable Mention: SeaDek and Alcantara Take Over The World

Don’t get me wrong, I love how SeaDek feels on the tootsies. I also appreciate how grippy it is, as grippy surfaces are few are and far between on high-performance boats. But does it have to be everywhere? I’m pretty sure that if I stood around a go-fast boat plant long enough I’d leave covered in SeaDek. Same goes for Alcantara, that ubiquitous simulated leather product that dominates today’s upholstery. As with SeaDek, I appreciate its feel, durability and functionality. It’s great stuff. But a little less of both would be refreshing.