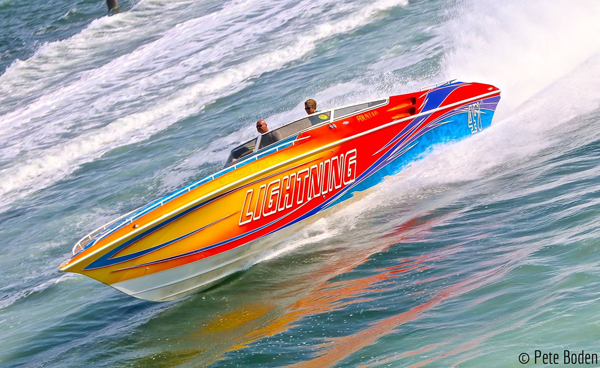 Though it’s not nearly as fun as taking fast boat rides or as creatively satisfying as writing columns and news stories, a healthy portion of my professional life is spent on the phone. As relatively new to journalism as the digital world is, the old-school reporter’s practice of simply picking up the phone every day and “working your beat” to find out what’s happening and what’s new has not been improved upon. Information technologies such as text messaging and email have made things more efficient, but there’s no substitute for just picking up the phone.

Among the folks I routinely check in with are those who sell new and pre-owned powerboats. My regular call list includes Mindi Doller at Doller Offshore Marine and Randy Sweers of FB Marine Group — both based in Florida — as well as Brett Manire of Performance Boat Center in Missouri. As you’d expect, they’re different people with different personalities but lately they’ve been singing the same tune.

They need clean pre-owned V-bottoms no more than 10 years old to sell because demand for such boats has never been hotter. For Doller, the biggest and most current customer craving is for “V-bottoms 44 feet and larger with big power.”

“A lot of my customers are looking for those,” she said. “But anything older than 10 years old is tough to sell. And then you have the center consoles, which are so hot that I can’t keep any of those less than five years old in stock.

“If you’re looking to move up in the market, now is the time list your boat because demand is strong and inventory is really low,” she added. “We have the buyers for your boat.”

Manire said he is facing the same challenge as Doller when it comes to finding clean pre-owned V-bottoms less than 10 years old. (The demand for used cats of similar vintages is not as strong, he noted.) The scarcity of such products makes perfect sense as the downturn in V-bottom sales and production started several years before the industry-crushing recession of 2008, and lasted for several years after with extremely limited production of models from Baja, Donzi and Fountain. (Though production of those lines has resumed, it doesn’t resolve the pre-owned model scarcity issue.)

“We are looking for 35- to 45-foot clean V-bottom sportboats and 30- to 40-foot center consoles—10 years old or less—with Mercury power,” said Manire. “As soon as you bring in a boat that has something other than Mercury engines, it puts the potential buyer in ‘What if?’ mode.

Condition of the boat is equally paramount. And it’s not always a factor of the age of the vessel. “We see boats that are three or four years old in horrible shape,” said Manire. “I just picked up a 15-year-old 32-foot Fountain that is spotless. It’s about how rigorous the owners were about maintenance.”

Manire urges used boat owners interested in selling to have engine compression and leak-down tests, as well as have a detailed marine survey completed, before he takes them on as pre-owned inventory at Performance Boat Center. He also said that owners probably shouldn’t expect to recover recent expenses required to make their boats saleable in the asking price.

“That’s not how it happens,” he said. “If you just put $30,000 into your engines that doesn’t mean you can add $30,000 more to the price tag and expect your boat to sell. It has to be in clean running order before you list it.

“But the market is hot and guys are able to ask a little more right now,” he added. “There’s not a lot of mainstream stuff out there right now—even some lesser-known brands are selling.”

Want to know if your used V-bottom is what these folks could be looking for? Pick up the phone. Trust me, it’s still an efficient and time-tested way to gather information. In fact, I swear by it.