You are at:Home»Industry»A Hopeful Comeback for Eliminator Boats 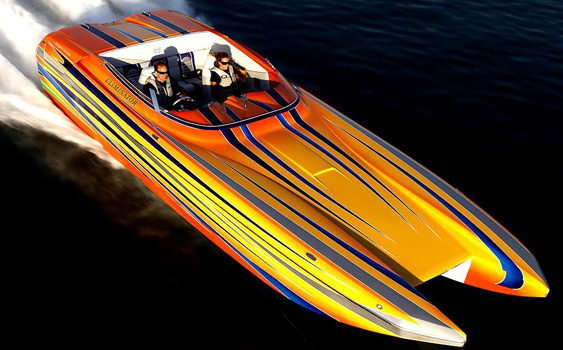 Eliminator Boats currently has four boats in production, including a new twin-engine 28 Speedster like the one pictured. (Photo courtesy Eliminator Boats.)

When it comes to the world of professional sports, my favorite awards are always the “Comeback Player of the Year” ones, which are handed out in many sports. Whether it’s Denver Broncos quarterback Peyton Manning returning from neck surgery to earn the National Football League’s latest award or San Francisco Giants catcher Buster Posey earning the honor in Major League Baseball after leading his team to the 2012 world championship a year after fracturing his fibula, the awards are always so inspirational.

There is no such award in our industry, yet I still can’t help but pull for Eliminator Boats to be the powerboat community’s Comeback Player of the Year, if you will. Yes, I know, I’m a journalist and often my job is to be impartial and not show favoritism. But this is my column and if ever there was a person in this business to root for, it’s Bob Leach, the owner of Eliminator and “The Godfather” of the West Coast performance boat industry.

I’ve know Leach for almost a decade and I can honestly say he’s one of the most respectful, personable and influential people in this community. He’s always made time for a phone call or a conversation at an event. In fact, I spent more than 30 minutes with Leach at the Los Angeles Boat Show last month, and while we talked boats, he was quick to ask me about my family and my daughter. That’s just the type of guy the father of four is. 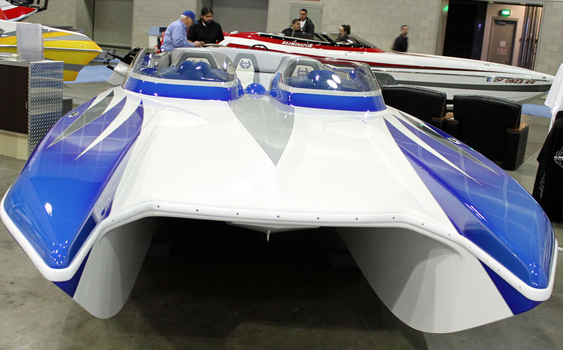 Yesterday I followed up with Leach to see how things have been going for the Mira Loma, Calif., company since the L.A. show.

“Things are picking up…slowly,” said an optimistic Leach, who is two and a half years removed from Eliminator’s Chapter 11 bankruptcy filing, an essential move to keep the company afloat. “The L.A. Boat Show was better than last year, although in my opinion [the organizers]needed to start advertising earlier than they did. Still, it was a positive show.”

Leach, who founded Eliminator in 1969, said the company currently has four boats in production—a 27 Speedster, a 28 Speedster, a 260 Eagle and a Fun Deck. That’s a far cry from the hundreds of boats that used to come out of the Eliminator facility annually, but, as Leach pointed out, some boats are better than no boats. 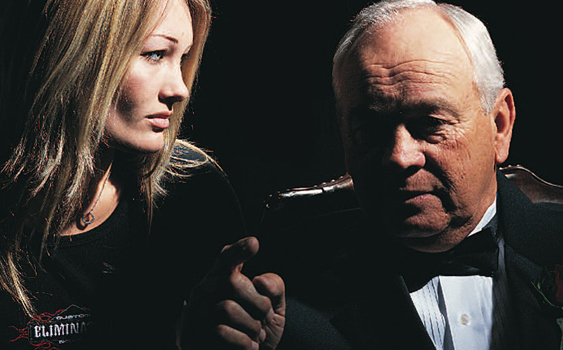 In this shot by Robert Brown from the May 2004 issue of Powerboat magazine, Leach poses as “The Godfather” with daughter, Brandie, who is getting married next month.

Who knows if we’ll ever see the day when Eliminator builds more than 100 boats in a year, but I hope we do. Not only for the good of the company, for the whole industry’s sake. If Eliminator is cranking out boats, that means other companies should follow suit.

“We’ve had a lot of interest in the 22 Daytona—we built a couple of the cats last month,” said Leach, who will be heading to the Caribbean next month to walk his oldest daughter, Brandie, down the aisle—a proud moment no doubt. “Everyone who sees the boat thinks it’s a 24- or 25-footer. They can’t believe it’s 22 feet. It’s a great entry-level cat because of its size, obviously. But it’s also affordable and you won’t have any issues insuring it. It’s a great running boat, too. The one we did with a [Mercury Racing] 525 engine runs right at 100 mph.”

When it comes to style (V-bottom or catamaran), power (mild to wild) and appearance (arguably the best gelcoat graphics out West), Eliminator has a boat for every taste. That’s why I think Leach and company could be in the midst of a comeback.