You are at:Home»Industry»Welcome To The MTI Show

A couple of Tuesdays ago, the gigantic storage building at Haulover Marine Center in North Miami Beach, Fla., looked like a massive Marine Technology, Inc., showroom. The recent, record-setting 260-plus boat Florida Powerboat Club Key West Poker Run certainly had something to do with it, but the fact is the place houses almost 40 MTI catamarans and center consoles from around the country in the winter. Come summer, that number will dwindle to less than a dozen creations from the Wentzville, Mo., company as their owners retrieve them to run on their local waterways and haul them to their favorite not-so-local events.

And once summer is over, they will migrate to their South Florida home for the winter.

But right now, if you want to see an amazing collection of MTI cats and center consoles from 34 to 57 feet, Westrec Marinas’ Haulover Marine Center is the place to be. 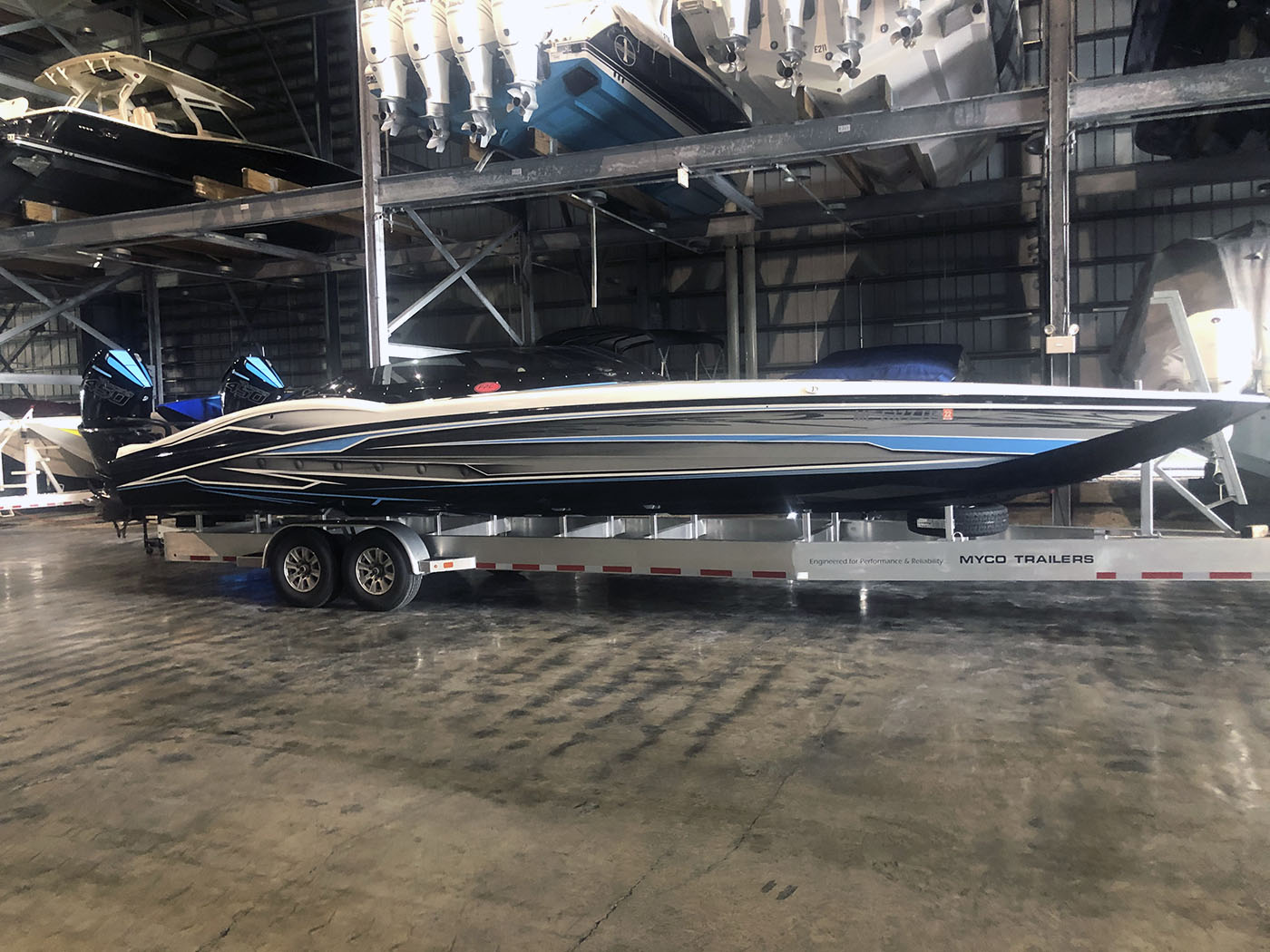 Remember Lil’ Jet, the 340X that Michigan’s Burton Kirsten ordered for his wife, Yvette, during last summer’s Lake of the Ozarks Shootout in Central Missouri? It’s there. So, too, is Craig and Paula’s Ackerman’s new 340X dubbed Sea Ya, which the Georgia couple took delivery of at Haulover just before the Florida Powerboat Club’s Key West happening. (The Ackerman’s even brought their insurance dude Devin Wozencraft along for the poker-run ride.)

Looking for the new 390X sport catamaran unveiled the night before the first wave of the FPC faithful departed for Key West? You guessed it—the 39-footer is resting comfortably in the barn at Haulover. So, too, is All Spooled Up, a spectacular and well-known MTI V-42 center console painted by Mark Morris of Visual Imagination. The boat is owned by Kim and Craig Hargreaves of Washington, who also own a 48-MTI with a matching Visual Imagination paintjob. And Hargreaves’ ride is but one of more than a dozen 42-footer MTI center consoles wintering in the facility.

MTI principal Randy Scism, who is there so often he’s looking at getting a place in nearby Aventura, chose wisely when he selected Haulover as headquarters for his South Florida sales, service and storage center in late 2018. Minus traffic, the place is 20 minutes from Miami International Airport and even closer to its Fort Lauderdale counterpart. Both are two- to three-hour flights from the Northeast and Midwest. MTI owners with their own aircraft—and there are more than a few of them—have options nearby. (To be fair, “minus traffic” are two words not often used together in South Florida.) 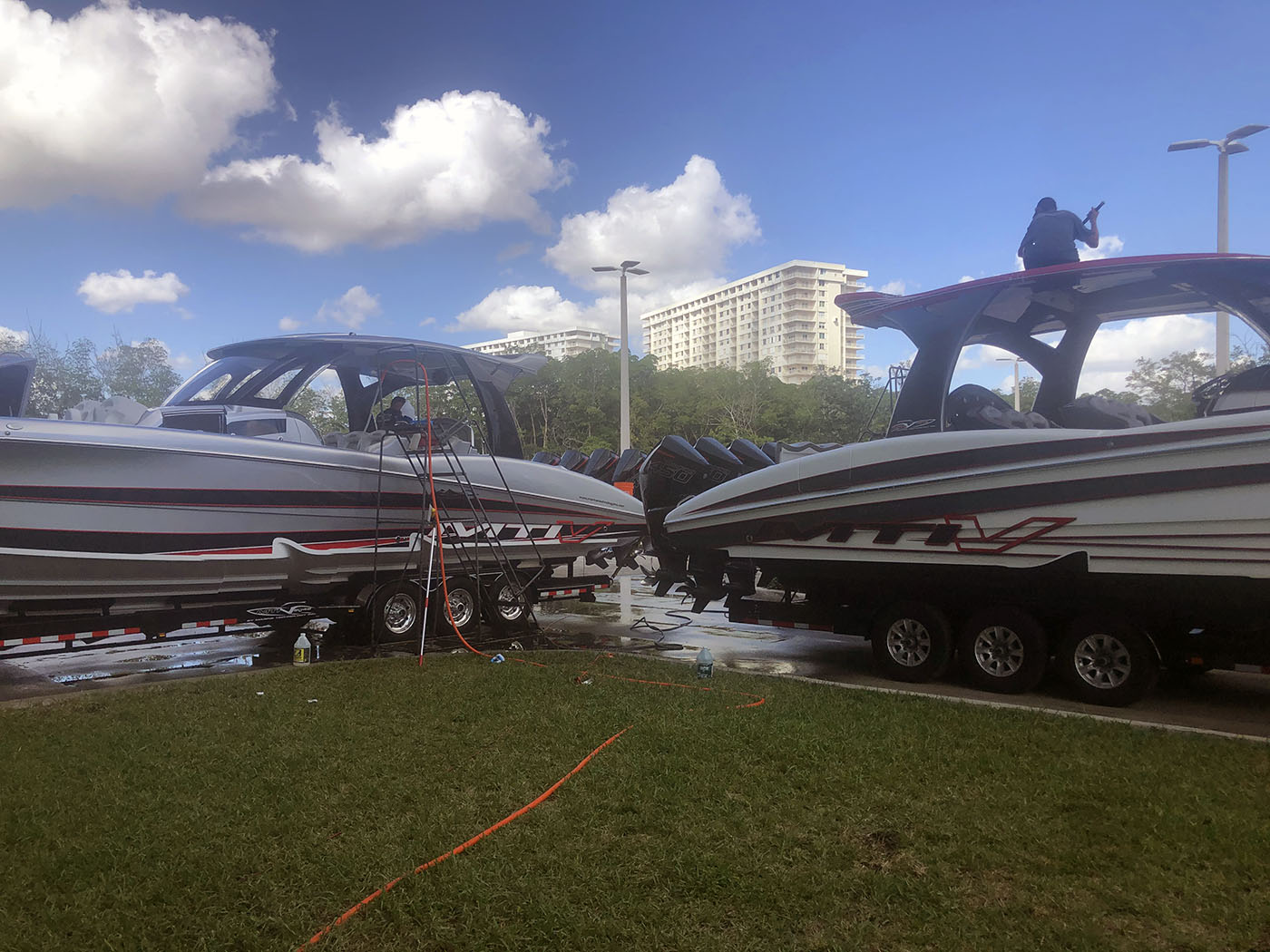 Point being: The Haulover location is readily and easily accessible. MTI owners who call ahead can have their boats waiting at the docks. And when they depart in a hurry, they can leave them at the docks. Milt Calafell, who manages MTI’s South Florida operation, will make sure they are washed and returned to their winter home. Renel Saint-John of Elite Detailed Cleaning can make it sparkle.

Looking around the place last Tuesday, John Tomlinson of TNT Custom Marine jokingly suggested to Scism that he should buy his own marina.

“What would I need to do that for?” Scism said, then laughed. “We’re doing just fine right here.”

True to his Midwestern roots, Scism always has been a low-key, humble guy, so his understated response came as no surprise to Tomlinson or a marine writer in town to test a boat with him. But for the next several months, Haulover Marine Center will look like the ultimate MTI showroom. And if you happen to be in town, that alone will make it worth a visit.