You are at:Home»Legends»Mixing in Some Pleasure 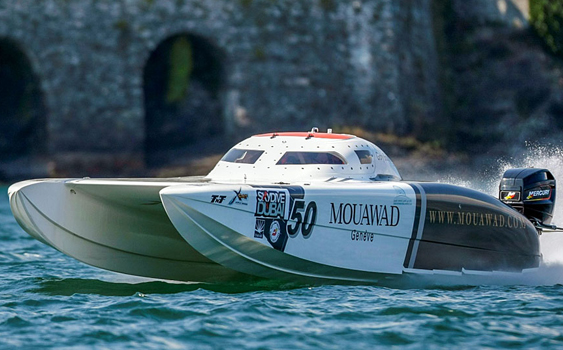 At the end of this week Gary Ballough will be catching a flight from Florida to Dubai in the United Arab Emirates (UAE) for the seventh and final race of the 2013 Union Internationale Motonautique (UIM) XCAT World Series taking place December 12-14. Racing his fifth season on the overseas outboard-powered catamaran circuit, Ballough and teammate Omar Danial of Switzerland have their Mouawad boat within striking distance of the overall championship.

A win in Dubai—the hometown of the Victory Team-backed Fazza boat that holds the series lead with 1,501 points compared to second-place Mouawad (1,290) and third-place Skydive Dubai (1,206)—would give Ballough and Danial their first XCAT championship, a title Ballough says would probably be the most gratifying trophy of his accomplished offshore racing career.

But Ballough’s shot at another world championship isn’t why I opted to write about him this week. The real reason I caught up with the Boca Raton, Fla., resident is that for the first time in many years, the throttleman is actually looking forward to the end of the racing season so he can do some pleasure boating.

Although it’s not 100-percent finished, Ballough has already been running the 32-foot Skater Powerboats raceboat he converted to a pleasure boat.

It came as a surprise when Ballough said he had never owned a pleasure boat up until he bought a Predator Powerboats C30 catamaran without power from Lake Cumberland Marine in Kentucky in 2012 and then sold the boat shortly after putting a pair of Mercury Racing OptiMax 200XS outboards on the back.

“That boat was wonderful—it ran 85 mph all day with the 200s—but someone had to have it, so I took their check,” Ballough said. “Of course I couldn’t be without a pleasure boat now that I’ve had one. Compared to racing, which is always stressful because of the travel, preparation and effort involved, I loved running the pleasure boat. It gave me a new appreciation of why I got into this sport in the first place.” 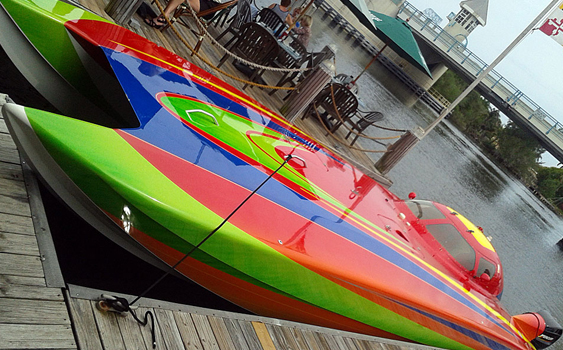 The colorful Skater raceboat was built to compete in the Superboat Stock class, but it never raced stateside, only overseas for a short time in the XCAT Series.

Ballough vows to keep his latest pleasure boat—one that he invested much more time and money into—for quite some time. In fact, he is planning to run some speedboat charters with the striking 32-foot Skater Powerboats catamaran that he recently converted from a race boat to a pleasure model. Although Ballough didn’t do all of the work himself, he did de-rig the entire 2006 raceboat after purchasing it and cut off the canopy before priming and hauling the 32-footer from Florida to the Skater facility in Douglas, Michigan. 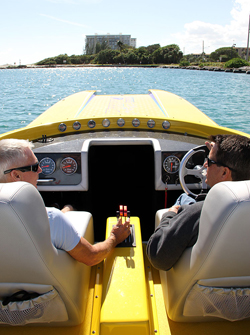 The project, which included updates from Skater to the deck and flooring, a new Aero-Marine wraparound windshield, race-quality rigging from TNT Custom Marine and new parts from the likes of Latham Marine, Livorsi Marine and Stainless Marine, took less than six months to finish. (Look for a complete feature on the project in the January/February issue of Speed On The Water magazine.)

Powered by twin OptiMax 300XS engines and painted a solid Camaro Yellow with white and gray racing stripes, the catamaran recently ran 107 mph without any dialing in or prop testing, according to Ballough. What was more impressive to him though was the boat’s fuel consumption. While breaking the engines in, Ballough and his daughter, Paige, covered 125 miles on 35 gallons of gas, which was a little more than 3.5 mpg.

“What’s nice for me, being a raceboat guy, is having two cupholders and a glove box,” Ballough said. “To me it’s like I have a Winnebago. The fact that I have a place to put my cell phone, wallet and a couple bottles of water makes me feel like a pleasure boater.”

Welcome to the other side of go-fast boating Gary. See you at a poker run soon. Oh yeah—and good luck in Dubai.