You are at:Home»Photographers»Ready For Their Close-Ups 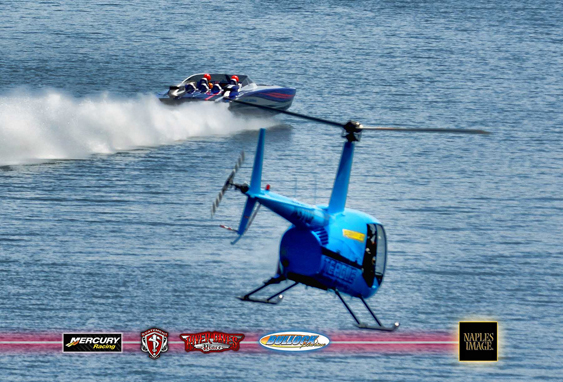 Chasing the shot—Skater owners will have their own photo shoot at Desert Storm this year with Jay Nichols.

Earlier this year, photographer Jay Nichols sent me his event coverage schedule for the year. Only one thought crossed my mind: Better him than me. If Nichols stays on track with his plan—and I have no reason to doubt he will—the guy will have more hours and miles in the air than most seabirds by the time he finishes up with the Super Boat International Key West Offshore World Championships in November.

Such is the life of a professional high-performance powerboat photographer. If you want to make a living, you have to hustle. A good reporter can competently interview a subject by phone from a great distance, but a photographer can’t just “dial up” a photo. To get the images he needs, he has to be on scene.

But along his way in recent years, Nichols found a clever way to augment his income beyond selling photographs to go-fast boat owners and companies. He sells “sponsorships”—company logos incorporated into his digital images, all of which can be viewed on his Flickr gallery that receives hundreds of thousands of views. 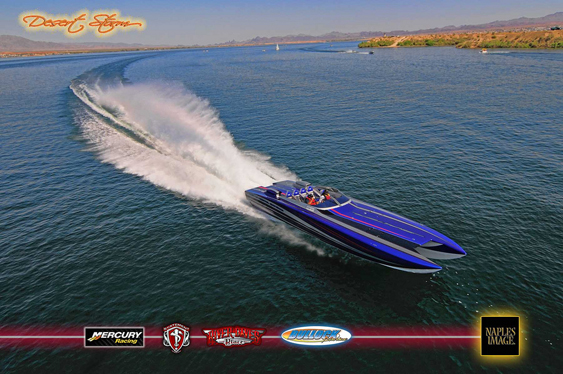 For Desert Storm in Lake Havasu City, Ariz., this week, his sponsors are Douglas/Marine Skater, Lake Cumberland Marine, Mercury Racing, Performance Boat Center, River Dave’s Place and Wozencraft Insurance. Skater is “new to the party,” and Nichols is thrilled to have the prestigious catamaran and V-bottom builder on board.

“The sponsorship program has been wildly successful,” said Nichols. “Skater is a natural fit—I am a big fan of their boats. Peter Hledin’s reputation as a builder is impeccable. Plus, he’s a friend, and I always enjoy doing business with friends.”

Nichols enjoys doing business with friends so much, in fact, that he’ll be doing an exclusive Skater photo shoot Friday morning before the poker run. He said he’s expecting 12 to 18 boats at the shoot, which he’ll handle from a Robinson 44 helicopter flown by veteran pilot Fred Young.

As if owning and running a Skater in Desert Storm weren’t cool enough.

“The actual time of the Skater shoot has yet to be determined,” said Nichols “I’ll be in touch with Peter and [Skater national sales manager] Tony Cutsuries tomorrow on that and we’ll get the word out. I get to Lake Havasu Wednesday afternoon.

“I plan on having each boat run, one at a time, under the helicopter while it hovers so I can catch them one by one,” he continued. “They like to run in groups, so we’ll do a bunch of those shots and we’ll also do individual running shots. There’s a solid Skater presence at Lake Havasu—Predator, Lick This, Colledgewood and more. So I’m very excited about this. In addition to all the individual shots, I want to create commemorative poster for all the Skater owners.”

Nichols knows that given all the official events he has to cover during Desert Storm this year including the Street Party Thursday Night, the Poker Run Friday and the Top-Speed Shootout Saturday, he’ll be running flat-out. The Skater shoot will add to his workload, and he couldn’t be happier about it.

“I can’t wait to get there,” he said. “I’m flying down from Las Vegas on Wednesday with Fred Young in his helicopter, and I’m hoping we’re able to follow the Colorado River all the way down. Desert Storm is always one of my favorite events to shoot. I think this year is going to be special.”

All photos by Jay Nichols.