You are at:Home»Racing»Handicapping And Hedging

The Superboat class will be hotly contested later this month in Key West but the author is picking Performance Boat Center to go home with the world championship. Photos by Pete Boden/Shoot 2 Thrill Pix.

With a few notable exceptions — last year’s two-catamaran Superboat Unlimited-class CMS team for example — trying to pick the winners of each major class in the annual three-race Super Boat International Offshore World Championships in Key West, Fla. is a fool’s game. That, plus covering every race of the SBI season for the past few years, definitely qualifies me for the job.

But I’m going about it differently this year before the Nov. 6-13 event is upon us. I’m picking a purely “emotional favorite” as well as the likely world title winner — at least in my view — for the Superboat Unlimited, Superboat, Superboat Extreme, Superboat Vee and Superboat Stock classes. And I’m separating these picks into two categories, “Heart” and “Mind.”

The CMS cockpit duo of Bob Bull and Randy Scism isn’t about to slow down for its fellow MTI catamaran Wake Effects team in the battle for the Unlimited-class title.

Heart: Miss GEICO — because watching their fall and epic fail during the past two seasons has been gruesome and painful. Say what you will about this team — and everyone seems to have a strong opinion about it—the entire hardworking Miss GEICO group has raised the profile of the sport. Winning one race during the Key West Worlds would be a step in the right direction for this important team. Taking the title would be the comeback it desperately needs.

Mind: CMS — Owner/driver Bob Bull and Randy Scism could go three for three in their 52-foot MTI catamaran and take the world title in a walk. That’s how good they are. Anyone who believes they’ll hold back to let their 48-foot MTI cat stable-mate Wake Effects (which claimed the national title this year) take the world championship seriously underestimates the competitive nature of Bull and Scism.

Heart: STIHL — because after the sudden tragic death of Robert “J.R.” Noble, one of the sport’s greatest supporters and benefactors, a world title for rookie driver Jake Noble, his son, and throttleman Grant Bruggemann would be a storybook ending. Plus, the young driver and his mentor finished a solid fourth in the national standings this year and ran consistently well all season.

Mind: Performance Boat Center — Throttleman John Tomlinson and driver Myrick Coil took the national title and looked dominant in their Skater 388 catamaran with Sterling Performance engines in most races this season. Of course, it would be an act of insanity to count out owner/driver Billy Mauff and throttleman Jay Muller in WHM Motorsports as they return to Key West as the defending world champions. Those guys are good; damn good — and experienced. Still, Tomlinson (and in the interest of full disclosure I admit he’s a close longtime friend) is the best in the game, both on the sticks and when it comes to preserving the equipment. He’s not just a great throttleman. He’s a great strategist and tactician.

Heart: AMH Construction/Instigator — because owner/throttleman Peter Myer and driver Johnny Stanch showed up at every SBI race this year, ran solo in each event except the National Championships in Clearwater, Fla., and always tried to put on a show regardless.

Mind: AMH Construction/Instigator — I’m on record saying that what happens during the regular season doesn’t matter much during the SBI Worlds. The three-race Key West format, with double points on Sunday, changes the game. I still believe that based on historic results and more interviews with Key West champions than I can remember. But Meyer and Stanch have far more race-condition seat time than any of their competitors this year. Though I believe Cooper Standard/Twisted Metal will press them hard (the new SV 43 from Outerlimits remains a wild card), I see the AMH Construction/Instigator team winning its second Extreme-class world championship in two years this month. 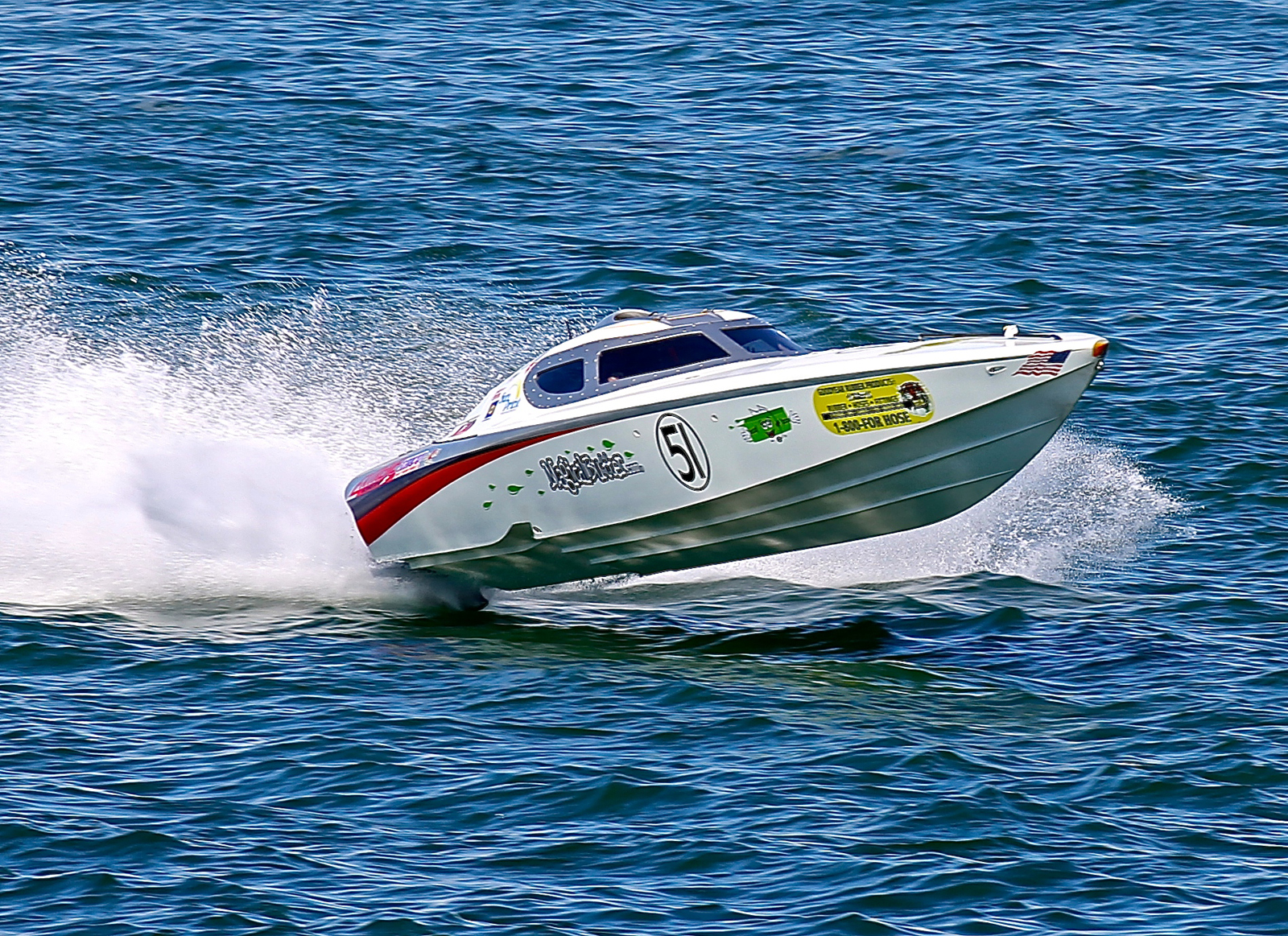 Even one day of rough water during the SBI Key West Worlds delivers a big advantage to Steve Miklos in the Superboat Vee-class Sun Print boat.

Heart: LSB/Hurricane of Awesomeness — because throttleman Brit Lilly is a legacy offshore racer who has worked hard to improve and remains a gracious and humble winner. Even after he and driver Ron Umlandt took the national title in this his first full SBI season, Lilly opted to praise his competitors, and credit them with helping him learn how to be competitive. Class act.

Mind: Sun Print — The most seasoned competitor in the class, owner/throttleman Steve Miklos has his 29-foot Extreme dialed in and he’s proved it this season with three first-place finishes and one second-place result. But more important is, first, he’s a great rough-water racer and Key West typically delivers at least one race with rough water. Second, he knows how to manage his equipment so that he doesn’t destroy it when conditions get nasty. Last, Miklos credits his rookie-year driver Steve Fehrmann with being a quick study in terms of handling traffic, and that’s an essential skill to have in Key West where the multi-class fleet in each race tends to be large and traffic gets heavy.

Heart: 5 Brothers Grocery — because despite being completely outgunned in his 30-foot Skater catamaran by Gary Ballough in his 32-foot Doug Wright, owner/throttleman Ryan Beckley showed up and worked hard at every race and competed, knowing full well that Ballough could take him at any time. Beckley (also a longtime friend) is one of offshore racing’s true believers — Peter Meyer is another — and an asset to a sport that desperately needs as many of them as it can get.

Mind: Frank and Jimmie’s Propeller — Throttleman Gary Ballough demonstrated his ability to beat his friend Beckley pretty much at will this season. He also has his Mercury 300XS outboard engine program dialed in for his 32-foot Doug Wright cat. It will be intriguing to see how the other competitors in the class fare in Key West, particularly the Smart Marine/Team USA cockpit pairing of Smart Marine principal/driver Chris Schoenbohm and throttleman Kevin Pruett with their new 32-foot Phoenix cat, but I struggle to see anyone beating Ballough and driver Darren Kittredge this year. 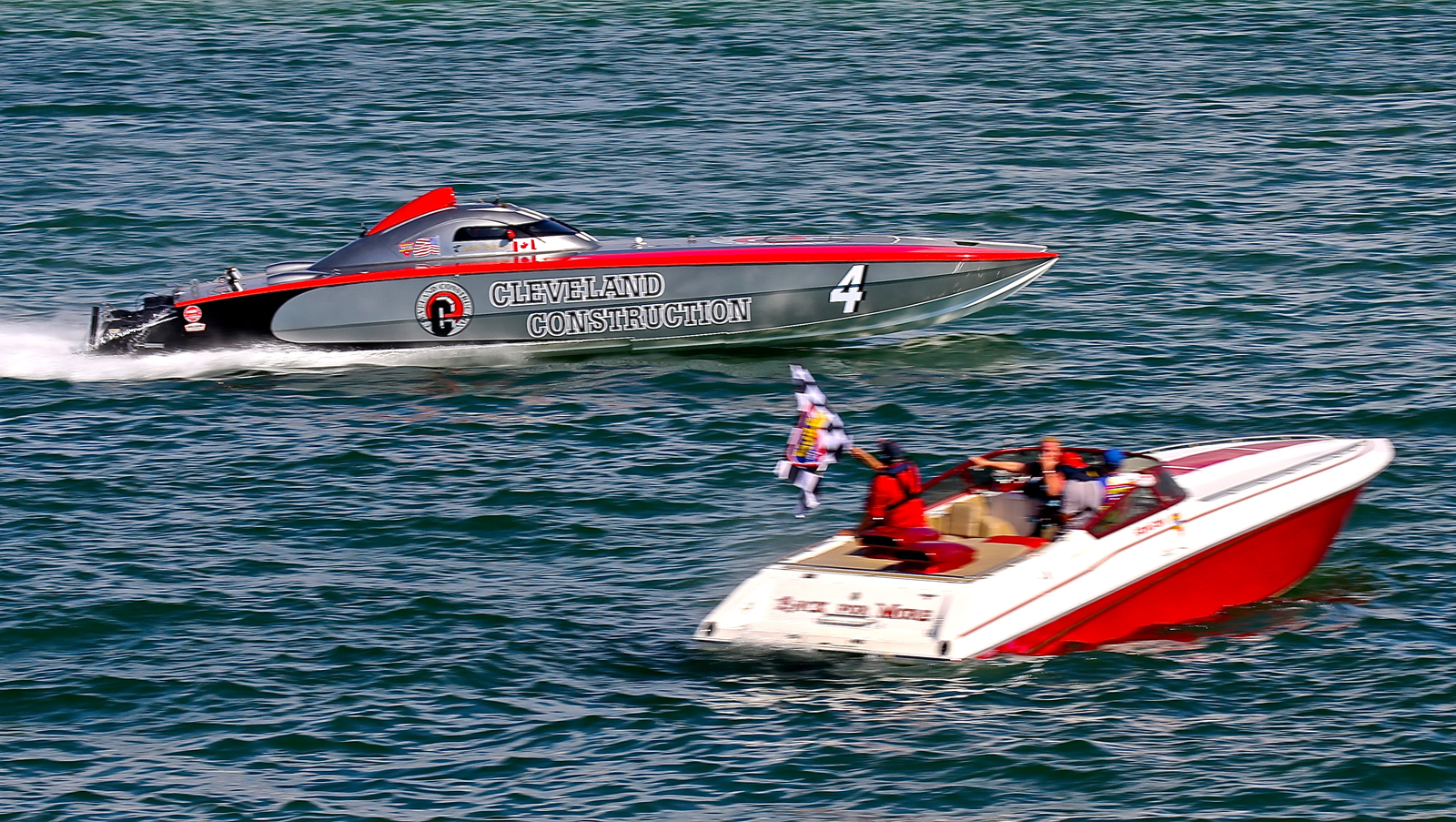 The winner in SBI’s final race of the season in Clearwater, Fla., Cleveland Construction has all the makings of Superboat-class spoiler.

Now, there’s another category I’m going to call “Spoilers”: teams that are coming into the Key West Worlds hot and cannot be counted out by any reasonable observer. Two of them, American Ethanol/Cat Can Do in the Superboat Unlimited class and Cleveland Construction in the Superboat ranks, have two common denominators, throttleman Keith Holmes and Sterling Performance engines. And although Marker 17 Marine—the former the Snowy Mountain Brewery Outerlimits now owned by Brian Forehand— hasn’t raced this season, it would be moronic to dismiss Forehand and Michael “Doc” Janssen, who have won multiple world titles in the 29-footer.

So there you have it, my “heart and mind” picks”—plus possible spoilers—for the 2016 SBI Key West Worlds. As I wrote in the beginning of this article, making such picks is a fool’s game. But as I also wrote, I’m more than qualified and happy to play it.