Owning a beautiful high-performance powerboat such as this Skater V-bottom doesn’t mean you have to go without a VHF radio. At the very least, a handheld VHF unit is an option. (Photo by Pete Boden/Shoot 2 Thrill Pix.)

When I was 13 years old and dinosaurs roamed the earth, I watched a dive boat sink three miles off Anacapa Island, a speck of uninhabited land that’s part of Southern California’s Channel Islands chain. Unfortunately, I watched it while bobbing in the Pacific Ocean with my friends and fellow divers—our diesel-powered boat’s bilge pumps failed in the bumpy seas during our final shallow-water dive, which made it a long one, and by the time we re-boarded the boat, the compartment was nearly full and the engines were mostly submerged.

Fortunately, most of us were still in our wetsuits when the boat went down like a stone. A few wetsuit pieces floated to the surface, so those without found a bit of additional protection from the cold water of the Santa Barbara Channel.

We bobbed in the water for close to four hours that day before we got lucky. Our skipper hadn’t gotten off a distress call so no one knew of our predicament, but somehow a passenger on a fishing boat—the last boat leaving the island—spotted us in the water. They rescued us and brought us back to Ventura Harbor. Without being too dramatic, I’m pretty sure that if we hadn’t been spotted I wouldn’t be here to write this story. As I said, the water was cold—less than 60 degrees—and the Santa Barbara Channel is notoriously full of sharks.

Even if we’d had mobile phones back then, they wouldn’t have done us any good. Cell service is spotty at best near Anacapa Island—I’ve been there since. Plus, we were still in wetsuits trying to figure out why the rear deck was covered in several inches of water and the bow of the boat was rising fast, and by the time we did the boat was gone. There wouldn’t have been time to fish through gear bags to find phones that may or not have worked. (Academic, of course, because in 1973 there were no such conveniences.)

Yet there was time to call for distress on the boat’s VHF radio. That our skipper didn’t do it immediately is a fact I’ll chock up to preoccupation with diagnosing the problem and, once he found it, pure panic. At this point, 42 years later, I don’t have much interest in blame. After all, the story has a happy ending. We lived.

Why this trip down bad-memory lane? A recent press release from Sea Tow titled “VHF Radio: The Best Form of Communication on the Water—Why Using a Smartphone Isn’t Always Smart,” landed in my email. And while my mobile phone is essential to my professional and personal life, the release reminded me that it should only be considered a secondary emergency communication tool on the water. 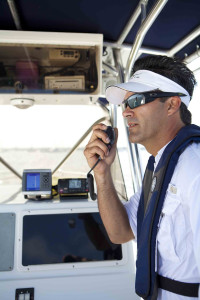 In an emergency, a VHF radio offers several advantages over a mobile phone. (Photo by Sea Tow.)

I know what you’re thinking: There’s no way I’m installing an ugly-ass VHF radio on the dash of my custom-painted dash of my catamaran or V-bottom. So don’t. Buy a handheld unit and stash it someplace you can reach easily.

“Your cell phone could die or you could drop it overboard,” said Captain Ed Schrader, owner of Sea Tow in Hamptons Road, Va., in the release. “We recommend people take a five-watt handheld VHF along on their boat—at a minimum—to use as their primary form of communication on the water.”

Schrader also said his first choice is a mounted VHF radio, but I know, I know, that just isn’t going to happen for you.

A VHF radio offers another distinct advantage over a mobile phone limited to its service provider’s coverage areas, which tend to end a few miles offshore.

“With a VHF, you are able to communicate with more people quickly on the water,” said Schrader. “Whether it’s Sea Tow, the Coast Guard, or a nearby boater, everybody’s going to hear what you’ve got to say. The United States Coast Guard’s Rescue 21 System also has VHF direction-finding capabilities and can obtain a relatively good location as soon as you click your microphone and place that distress call. This helps greatly if you do not know your location or don’t have time to provide it.”

Just make sure you find to use your VHF radio before—in the worst case—you have to abandon ship. Otherwise, you could be in for—in the best case—an extended float. And trust me, you don’t want to have that story to tell.