You are at:Home»A Family Affair»Another Lake of the Ozarks Connection

If it not for Kathy Riley, the mother of world champion offshore powerboat racer Rusty Rahm of Wake Effects team fame, Reese Langheim of Pawnee, Ill., and Brad Wade of Wentzville, Mo., wouldn’t be in the sport, much less on their way to receiving what will be the the second 32-foot Victory catamaran to compete in the United States. Allow me to explain.

A few years back, Langheim and Wade were in Key West, Fla., catching the Super Boat International Offshore World Championships. Longtime friends and go-fast boat enthusiasts who call the Lake of the Ozarks in Central Missouri their home water, they’d set themselves up in the V.I.P. spectator area on the Outer Mole to catch the Unlimited-class contest, the final race of the day. They were getting ready to take in the action when they noticed a nearby woman looking somewhat panicked. 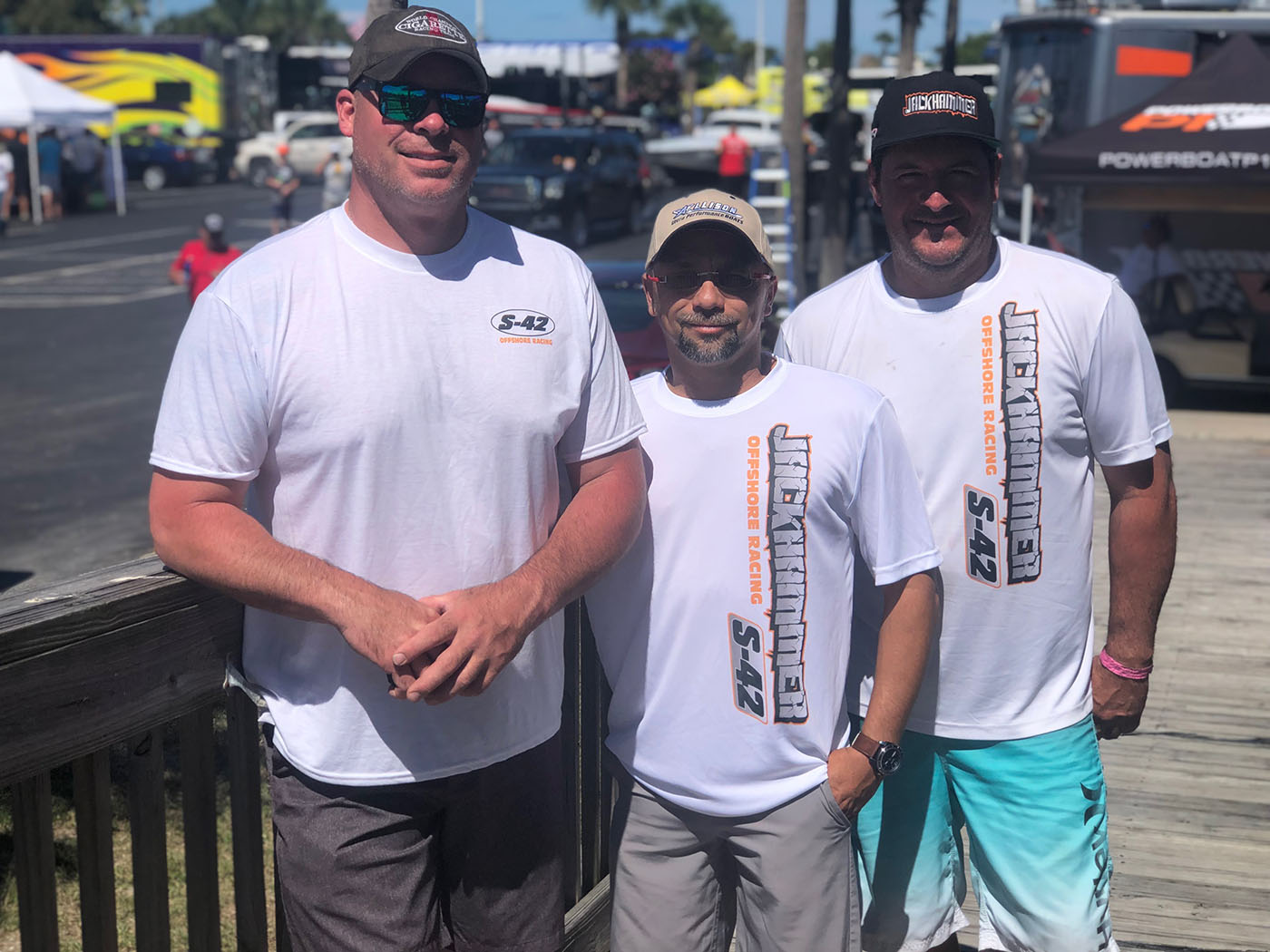 So they approached her. “She said, ‘My son is about to race and I don’t have a place to watch,” said Langheim. “So we invited her to watch with us.”

After the race, she invited them to meet her son in the Lake of the Ozarks-based Wake Effects team’s pit area. And that was all it took to turn a notion of getting into the sport into a reality. Within a year, Langheim had purchased a 34-foot, Australian-built catamaran and he and Wade began competing the outboard-powered catamaran ranks as the Jackhammer Offshore Racing team. (Langheim is in the concrete business.) A space-holder of sorts, the 34-footer wasn’t fast—but it did get them in the game.

Now the team has a 32-foot Victory Team catamaran coming its way. With a planned debut at the Lake Race on June 1, it won’t be the first Victory-built, outboard-powered cat to race stateside—Gary Ballough claimed that honor in his 32-foot Victory cat at the Thunder On Cocoa Beach event last weekend. But it will be the first one to be built and rigged by Victory, as this week it will be hauled from its port of entry in Savannah, Ga., to the Dubai-based Victory Team’s U.S. facility in Edgewater, Fla.

In January, they met with Victory Team representative Ricky Maldonado, who is spearheading the move to bring 27- and 32-foot Victory race and pleasure catamarans to the states. The numbers made sense and they ordered the boat.

“Ricky is going to be helping us throughout the season,” Langheim said. “So it’s a win-win for all of us.”

Why a Victory cat?

“We didn’t want to be like everyone else,” Wade said. “We wanted to do something different.”

The Lake of the Ozarks connection isn’t lost on either of them. Like their fellow offshore racers and high-performance pleasure-boat owners in what has become the center of this country’s performance-boating universe, they embrace it.

“Thanks to Rusty Rahm’s mom and Rusty, we’re in the sport,” said Langheim. “With them, it never would have happened. We have them to thank for it.”