I can’t say this with 100-percent certainty, but I’m making a very educated guess that this year—the company’s 20th in business—has been the most fun for Adrenaline Powerboats owner Mike Layton. It looked that way when I saw him at the Lake Cumberland Thunder Run two weeks ago and it sounded like that when I talked to him about his experience at last weekend’s Lake Murray Poker Run For Children’s Chance. 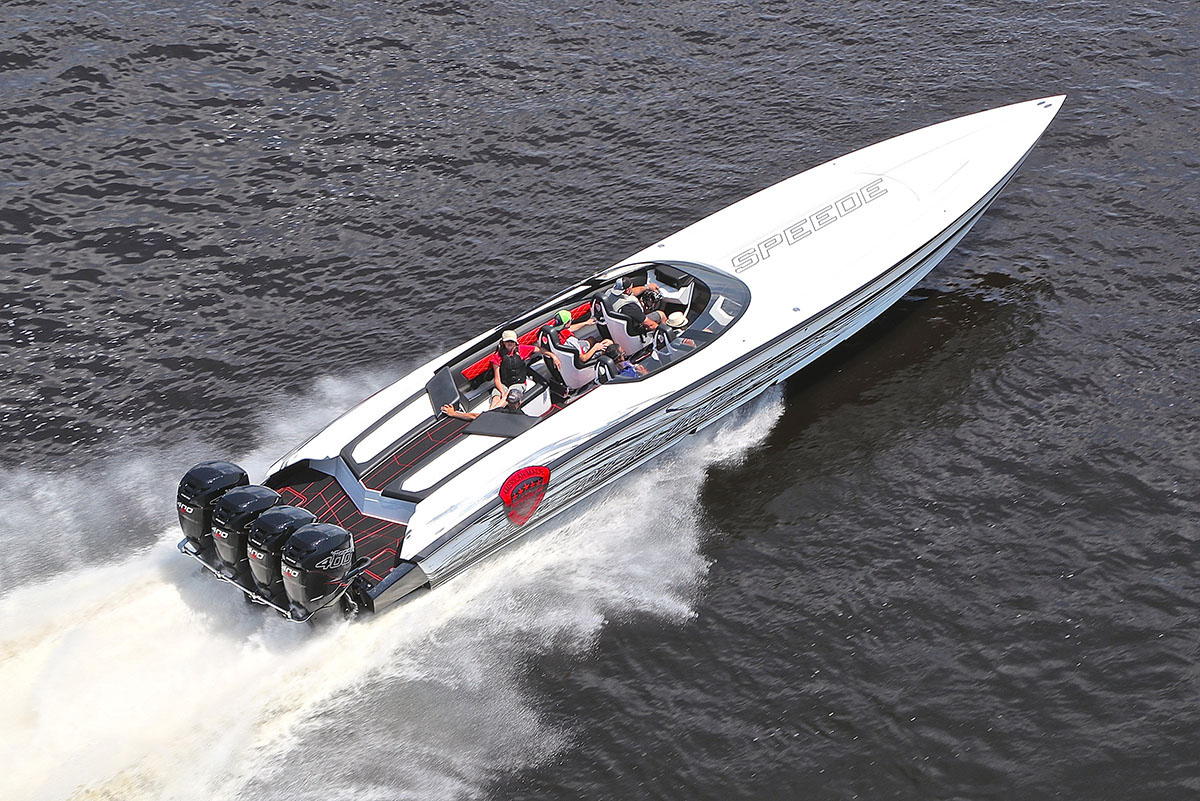 Adrenaline Powerboats showed off its new outboard-powered 45 Speede sportboat at the Jacksonville River Rally And Poker Run in May. Photo by Pete Boden/Shoot 2 Thrill Pix

And it actually started with the Miami International Boat Show in February, as Layton, his wife, Robin, and other members of Lincolnton, Ga., company, set up their first display ever at one of the biggest boat shows in the world. Not only was the stunning yellow and silver ZRX 47 Carbon Edition V-bottom powered by twin Mercury Racing 1100 engines at the docks in front of Miami Marine Stadium, the company’s super fresh 45 Speede with quad Mercury Racing Verado 400R engines made its debut at the boat show.

Since then, the Laytons—often with SuperTrucks’ Chris Walker, who commissioned the build for the two boats that are currently for sale—have taken either, and sometimes both, the ZRX 47 or the 45 Speede to several events. Both stylish V-bottoms were on hand for the massive Tickfaw 200 Poker Run in Louisiana in early May. Two weeks later, both boats participated in the Jacksonville River Rally And Fun Run in Florida, an event the company sponsored. 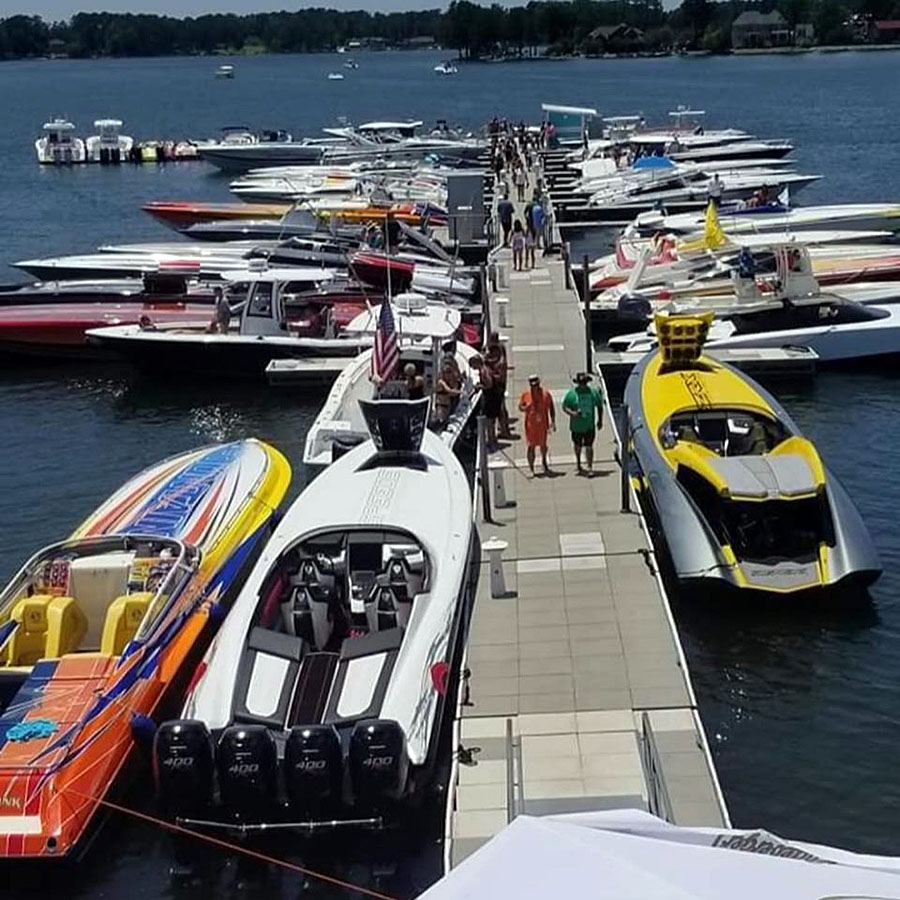 Adrenaline had both its ZRX 47 (right) and 45 Speede on display at the Lake Murray Poker Run For Children’s Chance. Photo courtesy Adrenaline Powerboats

Less than a month after that, the Laytons hauled the boat to Kentucky for the Lake Cumberland Thunder Run and then went home for a day or two of work before heading a few hours north for the run on South Carolina’s Lake Murray. Oh yeah there also was the “unofficial” Hartwell Lake Poker Run that several boaters enjoyed in early June after the South Carolina event that benefits Meals On Wheels-Anderson was postponed to July 11-13 because of severe weather forecasts.

“We’re taking a break from the road for a couple of weeks before the rescheduled Hartwell Lake event,” said Mike Layton, who sounded happy but tired the day after returning from back-to-back events in which he hung out with his newest friends from South Carolina—Todd and Debby Campbell, who own the MTI-V 57 Unbridled, and Chuck and Shannon Stark, who own the Outerlimits 42 GTX Loose Cannon. “It’s been a fun couple of months. Robin and I were just talking about how cool it is to find these pockets of friends who really support each other. It’s as close as you get to family really.

“This is the first poker run season we’ve gone hardcore with and we’ve noticed how close-knit of a community this is, which is pretty refreshing,” he continued. “I haven’t met anyone I didn’t like. I know there are some jerks out there, I’ve just managed to avoid them. I like the fact that people have been able to see what Adrenaline is about. It’s not just a brand name that builds cool boats, we’re a family business with customers and friends that are part of our extended family.” 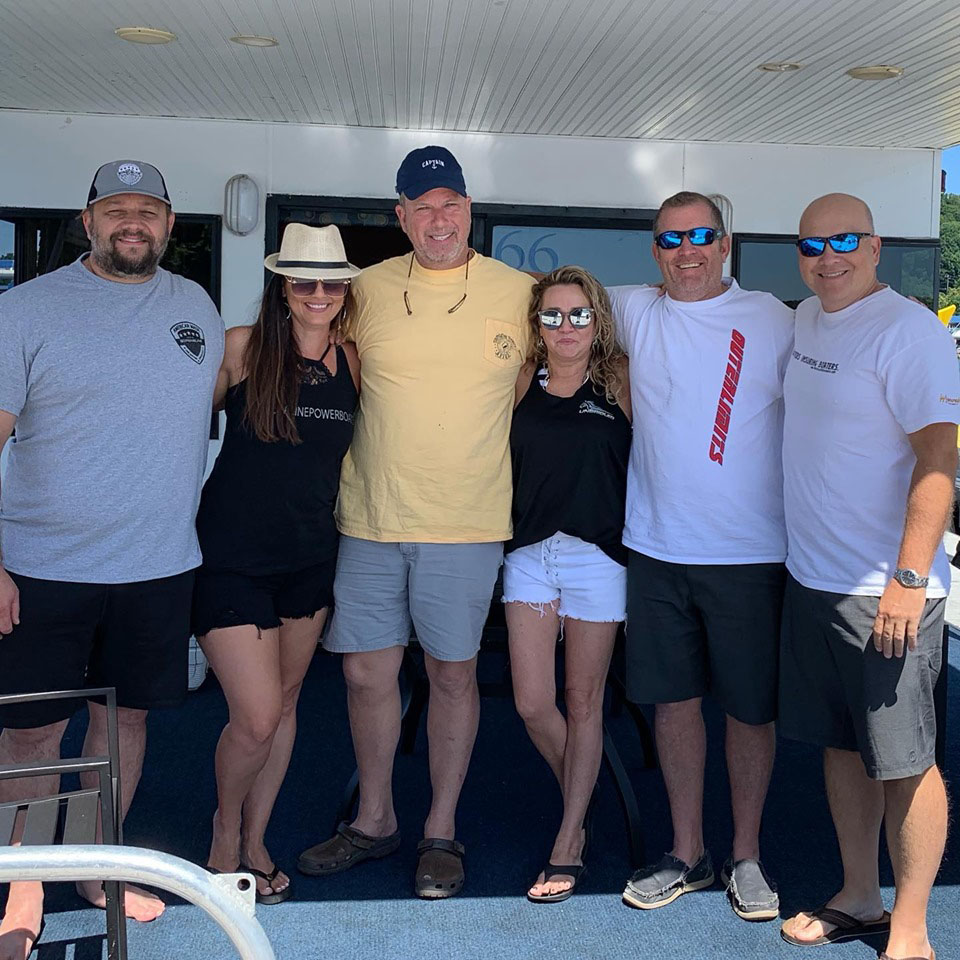 Beyond making new friends at the poker runs he’s attended this year, Layton said his favorite part has been seeing everyone’s reaction to the boats.

“People have been blown away by what we do—they say things like ‘I’ve seen this boat in pictures but it’s even cooler in person’ and ‘Your boats are breathtaking’—it’s nice to get that feedback,” Layton said. “The resounding question we get is ‘How do you guys do that?’ People love the styling and all of the unique things we design and build in-house. Some people are surprised with the performance of the ZRX 47. The speeds we’ve seen are impressive with 1100s. I think if I had to pick one, I’d go with the 47, but that 45 with the outboards is such a well-rounded package, plus the cockpit is so roomy.” 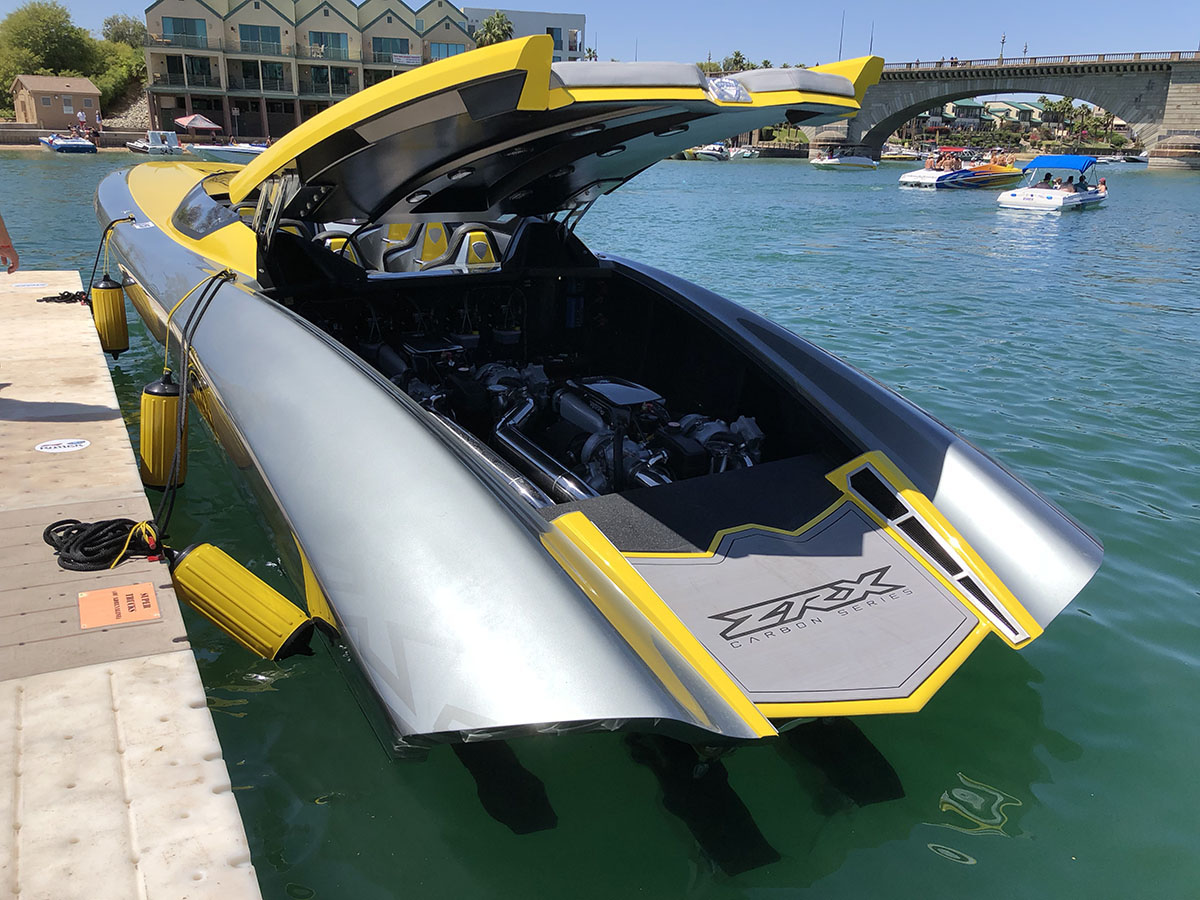 The Adrenaline ZRX 47 was quite the show-stopper when it debuted at the Desert Storm Poker Run in Lake Havasu City, Ariz., in April 2018. Photo by Jason Johnson

Layton said he’s had a lot of interest in the two sportboats, as well as the new 54-foot V-bottom that is currently under construction at Adrenaline. He also has a couple of other models in the works, but he’s not quite ready to announce them.

For now, he’s focused on getting more work done before he hits the road later this summer for a few more events, including the Lake of the Ozarks Shootout in Central Missouri in August, the Lake Powell Challenge in Arizona in September and the Key West Poker Run in Florida in November.