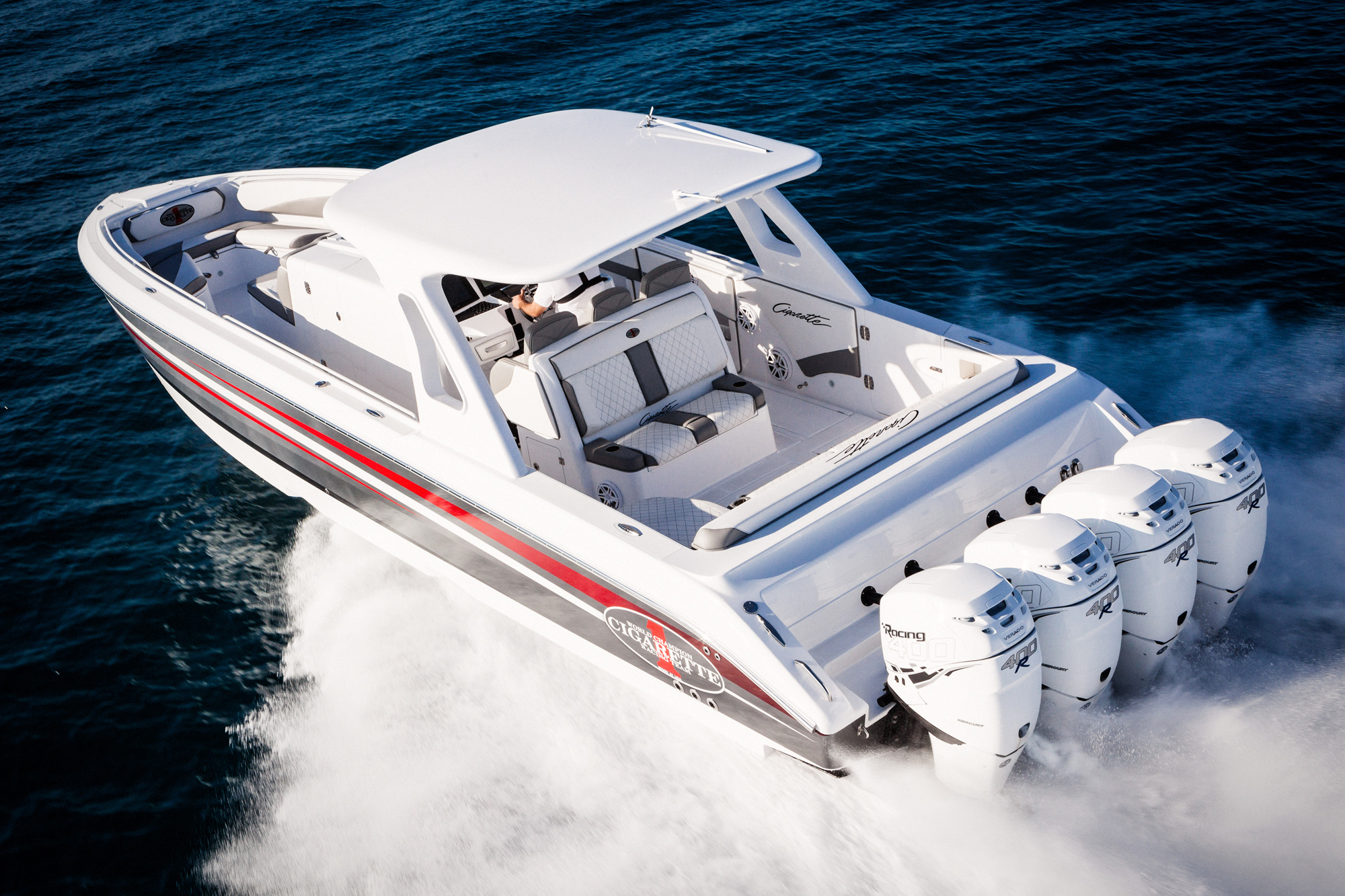 Released at the 2015 Miami International Boat Show, the 41’ GTR luxury performance center console is already finding a solid client base.

A tough act to follow—that’s probably the best description of the Mercedes-AMG GT S and Cigarette Racing Team 50 Marauder GT S Concept sportboat as it related to another Cigarette model, the 41’ GTR luxury performance center console, released during the 2015 Miami International Boat Show in February. And yet the 41-footer, the outboard-engine-powered cousin of the 41’ Stern Drive 1040 model that the company introduced in late 2014, is something that the 50-footer isn’t.

A boat you can order right now.

“I really can’t sell the 50 just yet,” said Skip Braver, the owner and chief executive officer of the Opa-Locka, Fla., company. “We have some more marketing projects, some here and some overseas, we have to complete before we can start seriously trying to sell that boat. The marketing value of that collaboration with AMG has been absolutely incredible. But it’s more than that. In today’s economy, it shows that we are a real company and that Cigarette is a luxury product. If someone is going to give us a $300,000 or $400,000 deposit, they need to know that we are going to be there tomorrow. The people at [Mercedes-AMG parent company] Daimler—with the background check and vetting they do—don’t just do business with anyone.”

Cigarette’s outboard and stern drive 41-footers are finding a welcome home in the center console marketplace, according to Braver. And though he declined to provide specific unit sales figures, as has always been his policy with the media, he said that both models, which ride on the same stepped hull, are taking off. He also said that the outboard engine-powered 41’ GTR currently is outselling the stern drive version, despite the stern drive model having been released several months before its outboard sibling.

Braver believes the difference is a matter of outboards being the traditional and far more common power choice for center consoles. But he also said that the 41’ 1040 Stern Drive is finding its own target audience, and that audience includes buyers who are completely new to boating.

“With the ‘SD’ boat, we started with a completely clean sheet of paper,” he said. “It was an entirely new concept in boating—a true inboard center console with an 11-foot beam and an extra large swim platform. That SD boat is in a completely different category, and it’s just beginning to get exposed. It’s a great boat for the Great Lakes and the Lake of the Ozarks. In Florida, everybody wants outboards but in places like Seattle, where we just sold one, people want inboards. I never thought I’d ever sell a boat in Seattle, but this guy saw the SD on the Internet and fell in love with it.

“The GTR has been a runaway hit,” he continued. “We took the one with quad Verado 400 R outboards, the one at the show, on the Miami Boat Show Poker Run with [Florida Powerboat Club founder and president] Stu Jones. That boat is Cigarette quality all the way, especially the way it handles and rides.” 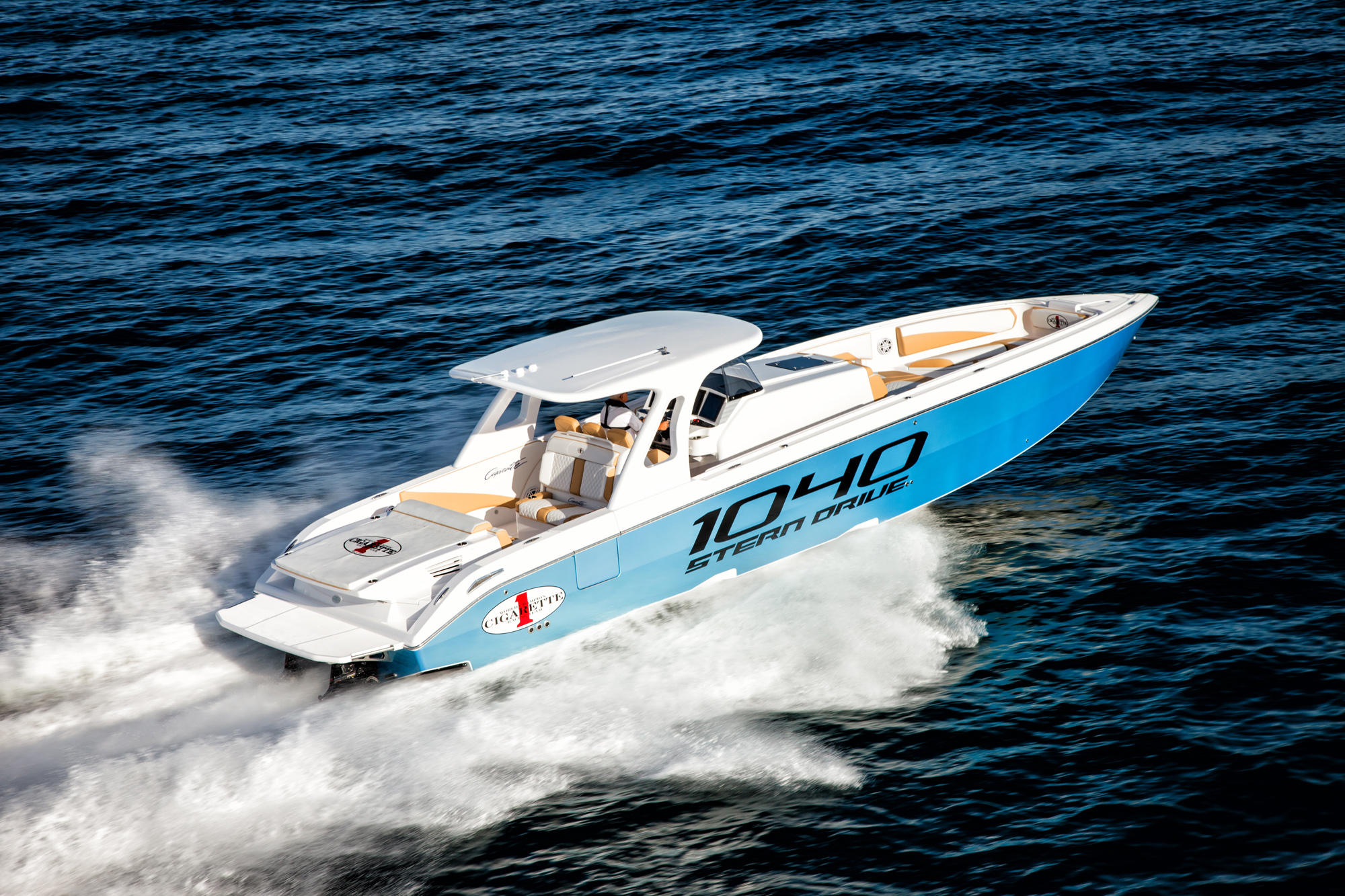 Braver on the 41’ 1040 Stern Drive: “We started with a completely clean sheet of paper. It was an entirely new concept in boating.’

“With the 350s, you can upgrade to Mercury’s seven-year warranty,” said Braver. “That’s pretty attractive.”

Led by orders for the 42 X and the 50 Marauder, Cigarette’s sportboat sales also are picking up steadily, according to Braver. As for what could be on the company’s drawing board in the future, he declined to provide any detail. But he did offer an overview of his strategic product development perspective.

“We keep tweaking what we know works, like creating a new windshield for the 42 Huntress,” said Braver. “Could we build a 50-foot Huntress? Sure. But what would that get us? Staterooms? I can already load the 42 Huntress with more friends than I have. We don’t do one-offs. We don’t want to build anything that doesn’t make sense. The SD boat made sense. The GTR made sense.

Editor’s Note: To read a comprehensive feature on the Cigarette 41’ 1040 Stern Drive that appeared in the Nov./Dec. issue of Speed On The Water digital magazine, download the publication now at no charge by clicking here.