Chances are, you’re not shopping for an offshore raceboat. If the go-fast boating world is small, the offshore powerboat-racing segment of it is tiny. So the raceboat-buying pool is shallow. No matter how much you love the sport, that’s reality—not good, not bad, only a fact.

But—just for fun—let’s say you are in the market for an offshore raceboat. Based on the current offerings on the market from Super Boat International’s Superboat and Stock classes, you couldn’t be looking at a better time.

“I let it go cheap because I want to see it on the racecourse,” said Mauff, who added that he isn’t sure who Hartman has lined up as a potential buyer. “I think we won four world championships in that boat.”

Of course, with the 2015 SBI National and World titles in his new 40-foot Skater to his credit, Mauff isn’t exactly pining for his former ride.

Damn, you say, I wanted a Skater. I guess I’m out.

Well, not so fast because the Stihl team’s “old” Skater 388—the one that took the SBI National Championship in 2014 and put on a high-flying show in the third race of that years’ SBI World Championships in Key West, Fla.—is still on the block. And Stihl team owner/driver J.R. Noble has “just reduced the price,” though he’s not tossing out a number for anyone but “serious potential buyers. (And who could blame him?)

There’s one more winner—as in the 2014 SBI World Championship holder—on the Superboat-class raceboat-for-sale list. Painstakingly rebuilt to include Marine Technology, Inc.’s latest generation canopied cockpit after its 2014 crash in Cocoa Beach, Fla., the 40-foot Broadco racer is still on the market.

“I have a couple of people looking at it now who apparently have big sponsor backing, but there’s no deal yet,” said Chuck Broaddus, the owner and driver of the boat.

Too rich for my blood, you say, based on the mid- to high-six-figure asking prices of these Superboat-class rides and whatever equipment is being packaged with them? Fair enough, but you can’t get off the hook that easily. 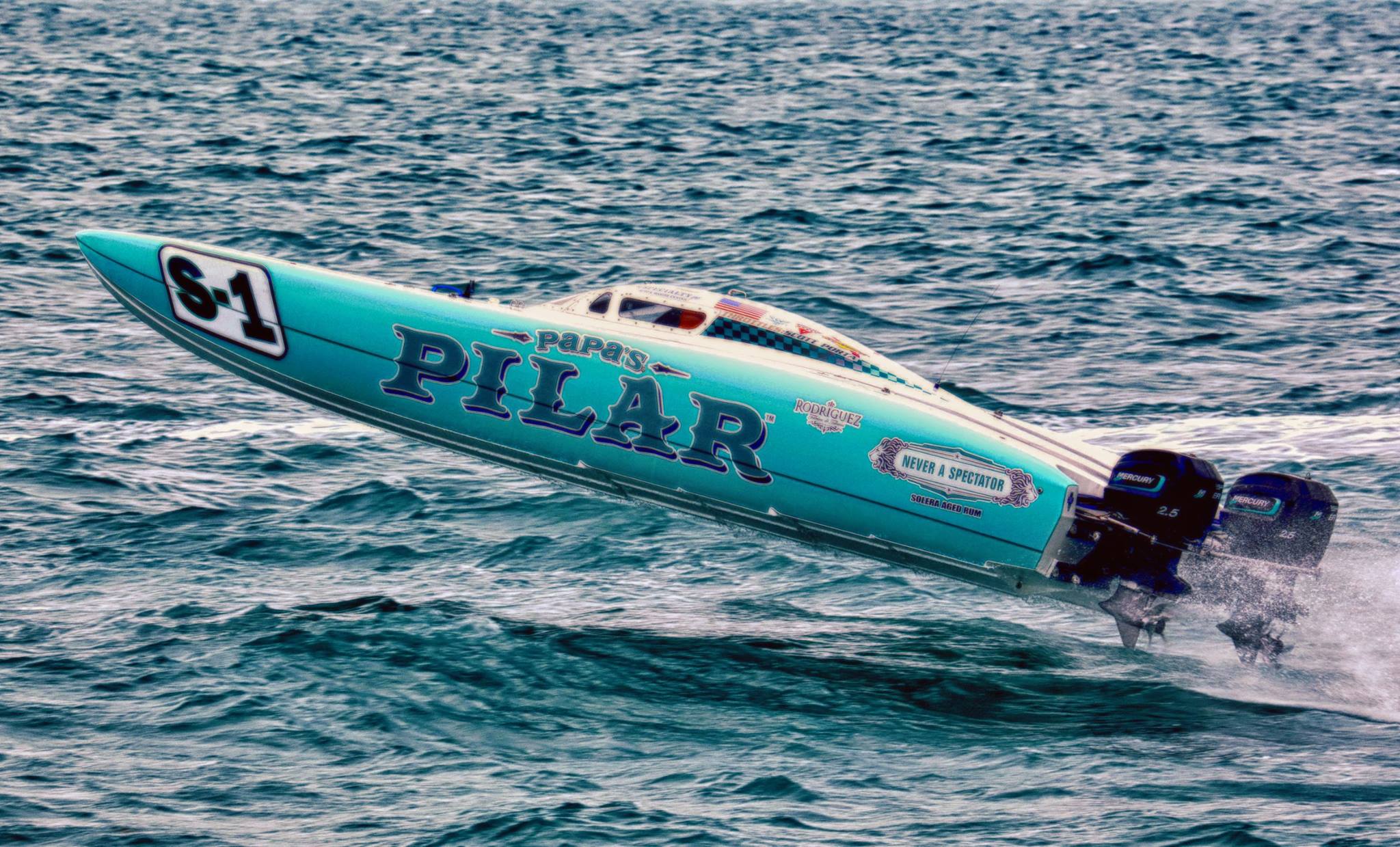 That’s because for less than $200,000, you could own a sweet outboard-powered Stock-class raceboat such as Scott Porta’s 32-foot Doug Wright catamaran, Papa’s Pilar Rum. Priced at $139,000 including its trailer and two Mercury 2.5-liter, 280-hp refreshed power-heads, the cat earned the 2015 SBI National Championship.

For a little less dough, you could pick up Ryan Beckley’s 30-foot DoublEdge Motorsports Skater and its powerplants. True, the 30-footer hasn’t been particularly competitive against its 32-foot Doug Wright competitors, yet it’s a solid boat owned by a dedicated offshore racer who always has taken great care of it. But if you’re interested, you better hurry because Beckley won’t stay off the racecourse long.

“Everything is still for sale,” he said. “But we’ll be racing it if I doesn’t sell soon.”

For a few bucks more—OK, the asking price is $169,000—you can get into Chris Schoenbohm’s Smart Marine Service/Patriot Vapor, the 32-Doug Wright catamaran that claimed the SBI Stock-Class World Championship in 2014 and took first place in two races at the 2015 SBI Worlds. In 2014, Schoenbohm widened the cat’s tunnel to 63 inches. In 2015, he outfitted it with his 32-foot Phoenix catamaran project’s “Variable Speed” bottom and “new aerodynamics,” according to owner/driver Chris Schoenbohm.

There’s a cool wrinkle with this one—you don’t have to buy it as a raceboat.

“For the same price, I’ll convert it to an open-cockpit pleasure boat,” said Schoenbohm. “I’ll cut off the top, do all the fiberglass work and put extra seats in the back. I’ll even repaint it.”

OK, you’re probably not in the market for one of these fine machines. That said, there’s probably never been a better time—based on what’s available right now—to buy one.