When it comes to vintage Cigarette Racing Team 38 Top Gun sportboats, they don’t get any prettier than the 38-footer built in 1993 and formerly owned by Jim and Patty Kirkland of Crystal River, Fla. The Kirklands called the beautiful boat their own for 18 years and it became well-known up and down the Southwest Florida coast, as well as in farther-flung environs such the Lake of the Ozarks in Central Missouri for the annual Cigarette Owners Rendezvous.

Things change, of course, and in keeping with the times and at least one upcoming current event—the Kirklands will become grandparents next year—they sold their prized Top Gun earlier this year. They replaced it with a 2011 Cigarette 39 Top Fish repowered with triple 2017 model-year Mercury Racing Verado 400R outboard engines. 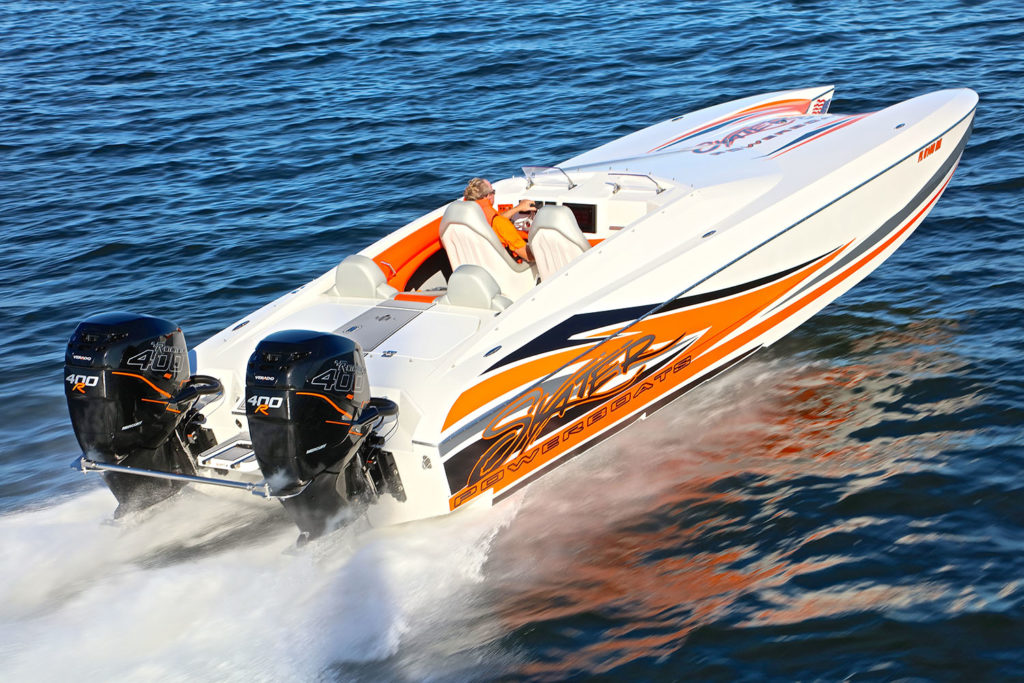 In honor of their future grandchild, they called the 39-footer Patty Cakes. “It’s going to be the ‘haul the baby’ boat,” said Jim Kirkland.

But don’t imagine—not even for a moment—that Kirkland would be content to cruise off into the sunset on an outboard-powered center console. That’s not his style, at least not completely, which is why he ordered a Skater Powerboats 308 sport catamaran in March 2018 and took delivery of it in August.

Before sending the 30-footer off to Premier Performance Interiors (https://www.ppi-fl.com/) in Sarasota, Fla., for cockpit upholstery installation, he rigged it with twin Verado 400R outboards. Also located in the Sarasota/Braden area, Ryan Beckley of Kinetic Animation (https://www.kineticanimation.com/) handled the boat’s graphics.

From the beginning, Kirkland wanted his new sport catamaran to be a hot rod.

“It has nothing on it that it doesn’t need to go fast,” he said. “The boat has four seats and a stairway down the back with SeaDeck on the steps so it isn’t slippery.”

Kirkland already has future event plans for both of his boats, and they make sense given their completely different applications. Early next month, he’ll run his 39 Top Fish to Key West and dock it in front of the Galleon Resort and Marina—in the same slip he used for his 38 Top Gun for 18 years—for the concurrent Super Boat International Offshore World Championships and Florida Powerboat Club Key West Poker Run events.

“Pete Boden talked me into going to Skater Fest next year,” Kirkland said, then chuckled. “And the 39 Top Fish already is his new photo boat.”

As Kirkland now knows better than most, balance is everything.