Just before getting shrink-wrapped and shipped to Spain, Xtreme Powerboats in Miami made sure the 48-foot MTI was ready for delivery to its new owner.

Nearly two months after the unlikely sale of Raging Bull, his Lamborghini Aventador-inspired 48-foot MTI catamaran, Gino Gargiulo only seems to have a little seller’s remorse as the new owner, Russian businessman Vladimir Koshelev, is taking delivery of the striking yellow 48-footer that is powered by twin Mercury Racing 1350 engines in Spain this week.

Besides the fact that the sale of Raging Bull was too good to pass up, it helps that discussions are in the works for Gargiulo’s next boat—and no, he’s not quite ready to let the cat out of the bag. 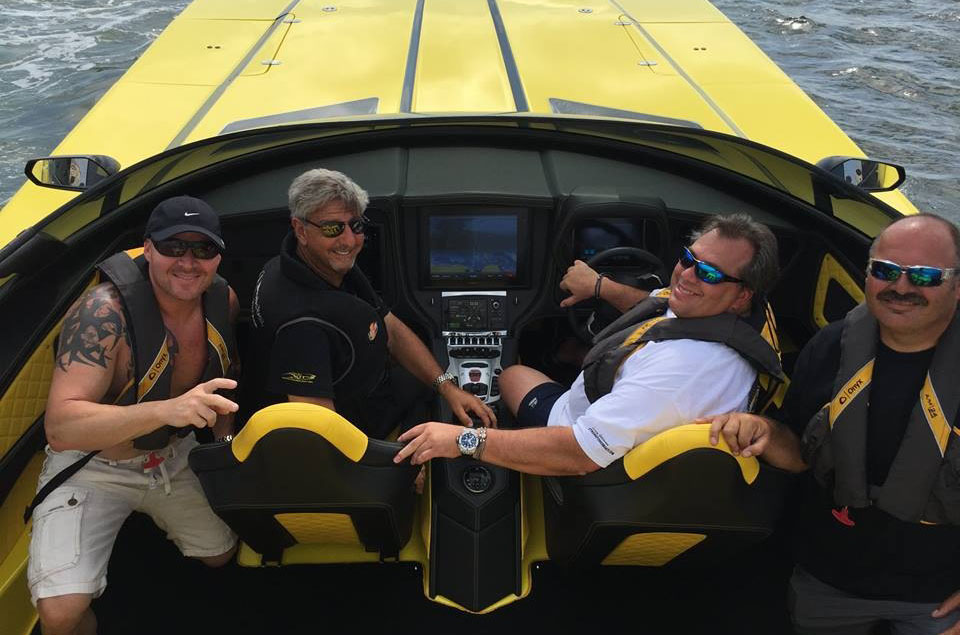 Although Larry Goldman and Gino Gargiulo didn’t get to enjoy the MTI for as long as they anticipated, they still had some good times during the year Gargiulo owned it.

“My boat wasn’t even for sale, but when someone wants it and is willing to pay for it, everything is for sale,” said Gargiulo who owns Oil Can Man and Clearly Exotic Car Coverings in South Florida. “I was a little sick to my stomach at first—that boat was my dream boat—but we’ve moved on and are getting ready for the next project.”

Before said project begins, Larry Goldman, the owner of Xtreme Powerboats in Miami who manages all of Gargiulo’s boat dealings, is catching a flight today for Spain where he will deliver the boat to Koshelev, who is an experienced boater and avid exotic car collector.

The boat is gone but Gargiulo still owns the Aventador built to commemorate Lamborghini’s 50th anniversary called the LP720-4 50° ANNIVERSARIO.

“I get into Spain Thursday and head over to Valencia to pick up the boat and get it prepped for us to drive over to Ibiza on Friday,” said Goldman, who, because of the delivery timing, had to back out of helping a few other customers at this weekend’s Pirates of Lanier Poker Run in Georgia. “We’re going to hit the island all weekend then come back to Valencia on Monday. I’ll probably go back again in August, too.”

Goldman said the boat sale would probably not have happened without the help of Anton Kovalenko of Red Square Holdings in Miami.

“Having Anton assist with the deal and help us through all of the translation concerns was a blessing,” Goldman said. “This is going to be a very busy trip but I’m looking forward to it. Heck, if all goes well I may even come back with another boat sale or two.”

Taken in April 2014, this picture was shot in Tampa, Fla., just before Raging Bull’s maiden voyage.

Goldman, a former offshore racer and reputable MTI dealer who has brokered deals for several center consoles as well as notable catamarans such as the Ferrari and Mercedes MTIs, promised pictures from his weekend at one of the world’s largest party spots, so look for a follow-up story on the excursion next week on speedonthewater.com.

He also said that he was hoping Gargiulo could join him for the trip but it wasn’t possible. “I think he’s going to miss the boat, but we’ve got something very cool in the works that is going to take his mind off of it.”