The Colledgewood 42 owned by Northern California’s Gary Colledge is about as unique as performance boats get.

Late last year I happened upon one of the most interesting projects I’ve ever seen at Teague Custom Marine. And trust me, after many visits to the Valencia, Calif., company over the last decade, I’ve seen everything from classic offshore raceboats, Hondo flat-bottoms and Schiada hot rods to high-powered catamarans, ski-race boats and triple-engine wave-crushing V-bottoms.

Thanks to its one-of-a-kind canopy enclosure and the large number 42 jumping off the sky blue paint job with multicolor accents—not to mention the scrap heap of hoses, cables and wiring on the shop floor next to it—when it came to the unfamiliar boat, I was more curious than the monkey in one of my four-year-old’s favorite books. 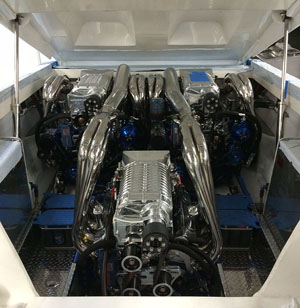 A trio of TCM 1200 EFI engines was installed with the utmost attention to detail in the Colledgewood 42. (Photo courtesy of Teague Custom Marine.)

It turns out it was probably the most unique boat in a long list of memorable ones owned by Northern California-performance boater Gary Colledge. Dubbed the Colledgewood 42 as it was commissioned in 2003 by the founder and CEO of Colledgewood in Lincoln, Calif., the 42-foot V-bottom was originally powered by three 1,000-hp TCM engines. The engines were rebuilt in 2008 and now the boat, which resides behind Colledge’s stunning home in Discovery Bay, Calif., was back in Valencia being upgraded with a set of the latest-generation TCM 1200 EFI engines.

I was able to peek around the 42-footer a couple of days before the first two engines—the rear set—were prepped for installation and the rebuilt Mercury Racing No. 6 drives were mounted to the transom. Now the boat is just about ready to hit the water.

“Nothing has gone ‘smoothly’ with this project, but it’s a one-off boat so we ended up doing a few one-off things,” said Josh Noack, one of the talented riggers at TCM. “The engine compartment was extremely tight before but we weren’t worried about that because the new engines had the same footprint. What we didn’t account for was having to remake the tailpipes for the center [forward]engine to clear the other two engines because the blowers were slightly larger than the previous engines.”

According to Noack, the boat received a complete re-rig and is currently awaiting a replacement windshield that was ordered from Aero-Marine before it is ready for testing. In the process of replacing the engines, wiring, hoses—basically starting from the ground up in the massive engine compartment—Noack said he and Cory Ferguson, installed electronic battery switches so the batteries could be turned on and off from the dash or from a key fob if you’re outside of the boat and the electric canopy is closed.

He also said one of the coolest parts about the project was the transmission alterations, which included swapping the BAM Marine Cyborg 1500 for the new Velvet Drive 72L-HP that is rated for up to 2,500 foot-pounds of torque. In the process, TCM used the tailstock and input shaft from Mercury’s M8 drive on the rebuilt drives so that the engines could remain in the same place while utilizing the new beefier transmissions. 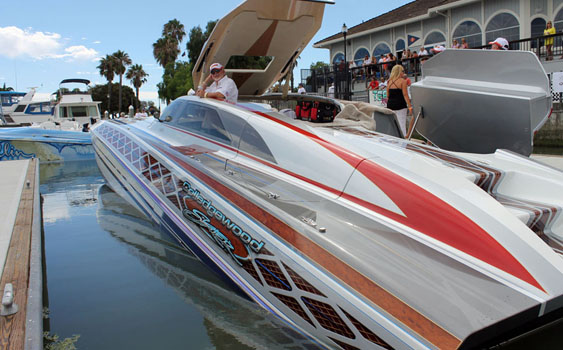 Gary Colledge’s hardtop 38-foot Skater is one of many individualized boats he owns.

Noack and Ferguson also upgraded a couple of things in the cockpit, which of course features Colledgewood veneer flooring. They added custom trim controls to the handles of the boat’s original Marine Machine throttles and installed a touchscreen Garmin GPSMAP 721 chartplotter above the entrance to the cabin.

To say that the eight-ton boat owned by the 83-year-old Colledge, a veteran of the Korean War, is unique is almost an understatement. But then again, when most of the boats you own are so extraordinary, wouldn’t that make them all ordinary? I know, wouldn’t we all like to be in such a situation.

Unless otherwise noted, all photos by Jason Johnson.